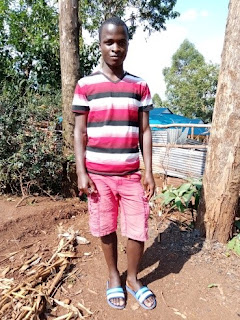 The family of Brain died in a terrible situation when a 3 storey building collapsed at Menyinkwa. Brian‘s father, mother and other 2 siblings met there cruel death there on the spot. Brian was called from school to witness the incident!!

The parents of Brian had stayed in Menyinkwa town for quit long without travelling to up country, this is the place where they gave birth to Brain. It was suspected that this family had sold the whole of their small plot and travelled to this town to begin a new life style and they could not return to their home since they had left nothing of their own. Due to this, Brain’s life faced o a lot of challenges and he decided to join the street of Menyinkwa.

There in the street some politicians started to use street children to do violence. Brain could collect tires and use petrol to burn and destroy people’s properties in order to terrorize the supporters of one’s opponents. If he did this he would get money for food.

One day we met Brain being a perpetrator of peace and we preached and ministered to his heart. He eventually surrendered his life to Jesus but he could not be comfortable to continue with the street life because he wished to avoid backsliding.

But now he had no place to belong. We accepted him in the orphanage so that the gospel can continuously transform his life. Brain was a criminal street boy but now he is a very polite and kind boy in the orphanage. He is happy for the reformation through the word of God and he is proud to be taken care of and he extends his appreciation to pastor Donald and Joel for the help he receives.

Brian is a good footballer and he has a passion to form his football team that will compete with other teams, He already has his team within the orphanage He also likes preaching to Junior Sunday school and he has hope of becoming a minister of the gospel. 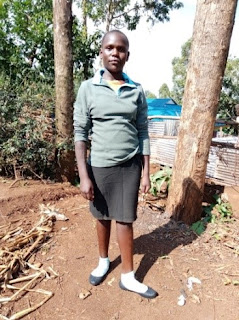 Josephine was born in a very complicated family background!!! Her father was known as Moses and he died when the pregnancy of Josephine was only 3 months old!!! . Her mother Mellen continued to stay as a widow in one compound with her mother in-law after the death of Moses.

This widow decided to abort the pregnancy of Josephine so that she can be married childless to a primary school teacher she had come in contact with. When Mellen’s mother in-law discovered this evil secret she chased her daughter in-law out of her compound.

After Mellen was chased out of her marriage zone, the information of attempted abortion reached this teacher and it sounded bad news! He also canceled his plans and his relationship with Mellen was no more!!  Mellen did not stop to do abortion but still tried several times to abort the pregnancy of Josephine in order to avoid the burden of raising a  child alone, but the abortion did not work at all!!

Mellen started developing health problems until she feared the risk of dying if she was to continue with the program of abortion. By the mercies of God this kid Josephine survived and was born without any complication but her mother started rejecting the baby Josephine right from the time of birth.

The grandmother of Mellen took her for care one year later the grandmother died of Diabetes after her possessions had been sold to cater for hospital bills and mortuary expenses .Josephine’s life was on danger now and there was no volunteer to adopt her and give her care.

We accepted Josephine in our hands and now she is rejoicing   with hopes of life. She likes athletics and singing she would like to reach more people with the gospel after school. 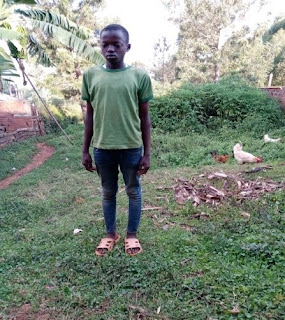 Mathew’s mother was employed as a house girl by Ogembo tea factory manage since the year 2005. In the year 2006 she was given pregnancy by a married man who worked in this factory as a watchman. When this watchman realized that this house girl had conceived his pregnancy, he abruptly stopped working and disappeared with his family to avoid shame and the possible separation of his family if his wife would learn what he had done to the house girl!!

The wife of the manager where this house girl worked was good enough to contain the situation of Mathew’s mother despite the fact of getting pregnant while staying with them as a house girl. Mathew’s mother was given humble time and was shown love until when she gave birth to Mathew in November 4th  the year 2006.

Mathew’s mother came to seek for a job in the manager’s house while she was already misplaced from her family due to conflicts and the family could not be traced and this also contributed for sympathy on her from the manager’s family. She was given the job and faithfully served as a house girl until the year 2017 February when she went out for shopping in Itibo market but never returned to the working place.

The manager continued to stay with her son Mathew and could support to educate him as he did from the previous years when her mother used to work there as a house girl. Mathew being abandoned by his mother could not have peace although he was under good care. One day he left school without the knowledge of his guardians {manager’s family} and went missing for three days.

On the fourth day upon his return he explained that someone lied to him that he saw his mother at Riosiri market which is located in our neighboring county called Nyamarambe selling sugar cane and he made up his mind to seek for her personally. This offended the manager’s family and he was chased from  this family because of staying out of home for three days while avoiding classes and without the manager’s authority and knowledge.

From there Mathew started going round into different families searching for help but he could rarely get accommodated and given a place to sleep for only one night to vacate in the following day. This young boy went through hard times and his lifestyle was not promising.

We met him in need of help and with that big heart brought him to the orphanage and her mother is still missing nowhere to be seen. This boy had become hopeless but now he has hope. Mathew gives God gratitude and his best regards goes to Pastor Donald for the continuous support he received from him and the church of Kenya too.

Mathew likes athletics and dancing in use his talents for God’s glory and more especially to train others in dancing for God as a means of serving Him with his   talent.

*********************
If you would like to help the children of the Log Church Orphanage of Kisii, Kenya, you may make your check out to “The Log Church” and write “Orphans” on the memo line.
Send it to:
The Log Church
PO Box 68
Tripoli Wisconsin 54564
We now need to pay a wire transfer fee with every payment, which amounts to $50 each time, but other than that, your donated money will be used only for purchasing food, clothing, schooling, and other necessities of living. Nothing is held back or diverted for any other purpose. Thanks!