A CELEBRATORY GLASS OF WINE

The event of Jesus turning water into wine is one of those stories that is very widely known all throughout our culture. Even people who do not know the Bible well, know of this story. I suppose that you may not find this true in many larger cities, but I am reasonably certain if you walked down the street of almost any small town in America and asked people at random, “Who was it that turned the water into wine?” I think that every single person would be able to tell you.

“It was Jesus.”
Everybody knows this story.


The story, as told by the Apostle John, begins like this: “On the third day there was a wedding in Cana of Galilee, and the mother of Jesus was there; and both Jesus and His disciples were invited to the wedding.”


In saying “the third day,” John is referring to the third day after he had left off the previous event in his narrative of the life of Jesus. As regards to the wedding, we do not know who was getting married, although some have tried to speculate who it may have been. I will not speculate. We do not know. We do not even know where the village of Cana was located. Only that it was in the Galilean region, which is in the northern part of Israel.


The village of Nazareth, where Jesus had grown up, was also in this region. This may partially explain why Mary was there. She must have known the family. Jesus had also been invited, and as is often the case at weddings, even people who did not know the couple getting married were invited 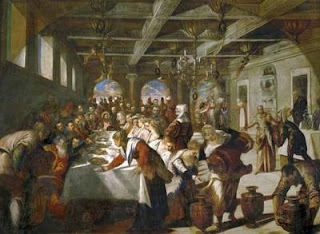 just because they were associates of an invited guest, as were the disciples.


Actually, in those days, the entire village was most often invited to a wedding. Weddings were huge affairs, often lasting an entire week. Wine was a staple at these celebrations, because the wedding was a celebration.


We all know that alcohol can be abused and over used, but the simple fact is, that in the Bible, wine is very often associated with celebration. Not excessiveness – I will also say that. Not inebriation. Not drunkenness. But drinking celebratory glasses of wine is very common in the Bible.


The presence of wine was also very important at this wedding. I would say that the people in Cana of Galilee, during that wedding feast, placed much more importance on the presence of wine at their feast than you or I likely would. At least me, if I had been placed in charge, would likely take the attitude – “The wine is gone, but there is still coffee and juice! I think that I can find some milk for you!”


But that attitude would not do in that time and place. In that case, when the wine ran out, the mother of Jesus came to him and said, “They have no wine.”

READ MORE >
Posted by Donald Rhody at 5:36 PM No comments: