One day, after Jesus made a rather vague reference to future events, the disciples asked him a question for which they probably wanted a straight and forward answer.  They asked Jesus, “Tell us, when will these things be and what will be the sign of your coming and of the end of the age?” (Matthew 24:3 NAS).


It is a question that many of us still ask today. It is not so curious that we should want to ask this question. Sometimes, political and social events in the world take turns that are highly unpredictable and even upsetting. These frightening developments make us all wonder if they are perhaps harbingers of the end of the age and the return of Jesus Christ.


The disciples did not exactly get a straightforward answer to their question. What they got was instead a series of parables to help them (and us) determine the social and political atmosphere that will be present in the days leading up to the end of the age. I am not going to go through all of those parables right now, for that is a lengthy process and I have done that in other places (see the book, Watching for the Day).


There are only two statements of Jesus that I want you to take away with you today. First of all, in speaking about the social and political atmosphere in the end times, Jesus said of the initial stages, “All these things are merely the beginnings of birth pangs” (Matthew 24:8 NAS). The second statement of Jesus is one with which he concluded two of his parables, “Be on the alert, for you do not know the day [nor the hour] that your Lord is coming” (Matthew 24:42; 25:13).


As you consider these two statements of Jesus, please now consider a word that has been introduced into the English language: Brexit. Although it is a very new word in our English vocabulary, almost everyone already knows what it means. If you do not, do a quick google search on it.


In fact, if you are a Christian, and to make your search more interesting, in the search bar type: “brexit and biblical prophecy.” You will find out not only the meaning of the word, but a whole host of people who claim to be Bible teachers and who will tell you exactly how Brexit was predicted in Biblical prophecy and how it signals that Jesus is coming back very soon. Often there is a postscript saying something to the order of, “Please send me some money so that I can get this message out to millions of people!”


Then, after you have done your internet search, step back and let the words of Jesus return to your thinking. “All these things are merely the beginnings of birth pangs. Be on the alert then.”


Despite my cynicism for some of the people who claim to know exactly how Brexit fits into Biblical prophecy, I do not deny that I also believe that what is currently happening in Britain and in Europe is significant in terms of events surrounding the question that the disciples asked Jesus, “What will be the sign of Your coming and of the end of the age?” (To continue reading, please click the READ MORE button below)
READ MORE >
Posted by Donald Rhody at 10:55 AM 1 comment:

In Luke chapter 8, we have the unusual story of a demonized man who was living in the tombs of a cemetery in the land of Gerasenes. This was a man who was driven by the demons within him. The man was obviously mad. He went around naked, and in some ways terrorized the people of the city. The townspeople had tried to control this demoniac, even putting him in chains and shackles and under the watch of a guard. However, apparently given tremendous strength by the demons, the man broke the chains and ran into the desert, driven there by those same demons. This apparently had happened more than once. The demons in the man (for there were more than one), seemed to have had complete control over the man, seizing him and making him to do things that the man did not want to do. 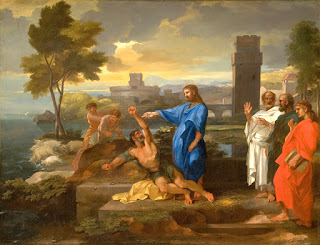 Although I have lived in some places where it was said that there were many people who had demons, I have never seen a situation such as this one. We sometimes speak of people as being possessed by demons, and even in many Bible versions, the word used is possession. It says that the man was possessed by the demons within him. From this translation, we get the idea that the demons had ownership over the man and that he had no independence at all, or any will of his own. But possession is a strong term to use in translating this. The word that is used is actually a primary root (in Greek) that means simply “to have.”


However, perhaps even more important than the translation of the word is how we think of this situation in terms of ownership. It was the man who had the demons, not the other way around. It was the man who was in possession of the demons, not the demons who possessed the man. Although in the case of the demoniac of Gerasenes, the man seems to have been almost completely under the control of the demons, he was still the one who had ownership over his body. He still was in control of an independent will, although, for so long had he given demons reign of his actions, he had all but forgotten how to exercise his own will. But even with this, a person will always retain his ability to choose or not to choose, as clouded as that distinction may appear.


In some ways, it is not unlike a chemical addiction that some people have. These addicted ones become so dependent upon the drug that it is actually difficult to tell whom or what is in control. Our bodies can become so addicted, that to not have the chemical would mean death. In cases such as this, it would seem that the drug is the one in control.


This is a terrible situation and I am not trying to pretend that it is not sometimes extremely difficult, but despite how it may seem, the person is still the person. It is not the chemical that is the person. Our free and independent will is something given to us by God and it cannot be taken away by a demon, or a drug, or anything else. (to continue press the READ MORE button below)
READ MORE >
Posted by Donald Rhody at 6:16 AM No comments:

In the past couple of years I have been working on an historical novel based on the Swedish emigration years of the late 1800's. It has just gotten published and you can order a copy by clicking on this link: HE BUILT WITH STONES 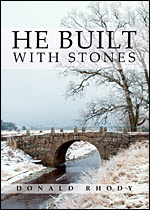 It was almost startling how early in the day the darkness came. The time was only about in the afternoon, but already it was difficult for the man walking in the failing light of evening to make out the trail back to the small cabin that he was renting. In addition to the falling darkness, what made his walking even more difficult was that there was snow on the trail. The snow had been packed hard by many footprints and had become very icy.


As the man picked his way through the dark shadows of nightfall, he stumbled once on a limb that had broken off a tree and was lying in the darkness across the path. The icy trail made regaining his balance difficult, but despite his foot slipping from under him a little, he finally did manage to right himself and keep from falling all the way to the ground.


The walker was a young man of about twenty-six years old. His name was Anders Johansson. The place was in the midlands of Sweden. More specifically, it was in the province of Värmland. The year was 1876.


The darkness coming at this premature hour of the day had taken Anders almost by surprise, as if it were something out of the ordinary. But Anders knew that the early sunset should not have been unexpected. It was winter, and at these latitudes, the daylight hours were always fleeting at this time of the year.


Nevertheless, every winter Anders seemed to be taken aback by the untimely sunset. The reason that he was caught unawares by it was because of the stark contrast between the winter and the summer months. In the summer, the situation was just the reverse. The sun barely even set below the horizon in the summer, and true darkness only lasted a couple of hours. But now, in the winter, there were a mere five or six hours of daylight, making the day seem almost over as soon as it had begun.


Anders reached the front step of his humble cabin and stomped his boots to get rid of as much snow as he could before opening the door. He lived alone, so there was no warming and cheering fire waiting for him in the hearth. No smoke coming out of the chimney. The inside of the cabin would be cold. In fact, once he stepped inside, it seemed even colder inside the cabin than it did outside. It wasn’t really, but when one enters a house in the winter, almost instinctively he expects it to be warm. When it is not, the coldness seems all the more intense.


Every evening that winter, when Anders returned to his cabin and felt the coldness even inside, his thoughts returned to another winter, just a few years earlier. In this region of Sweden, that winter of the past was now remembered as “The Winter of the Great Hunger.” He had barely survived that year. Many people he knew did not. Even some of his own family had almost succumbed to the starvation of that winter.


Anders shivered inside of the cold cabin, but it was not only the temperature that made him tremble. Despite the fact that that winter of hunger was some years in the past, the memory of it still made him shudder.


Just as the early darkness caught him a bit unawares, so did these nagging and distressing remembrances of that frigid winter of starvation. Anders had not thought much about it in the winters that immediately followed it, only in that he was glad that it was over. However, this year, he was almost haunted by the memories. He did not know why those thoughts suddenly made a return, nor could he shake the visions of the past that came to him.