The little church of Cascarí had some things in common with the first century church of Corinth.  In some regards, both churches were struggling.  Both had seen people who once professed to be Christian, fall away from the teaching and go back to the culture of the world.


For many of Cascarí, their enslavement to the world the second time was perhaps stronger than the first. I am not sure what to say about this, except, “May the Lord have mercy on their souls.” 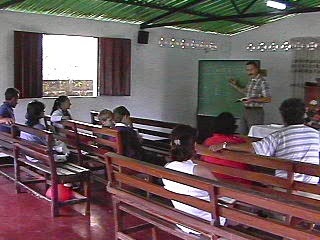 These unfaithful ones tended to give a negative representation of the Christian life to the people of the village of Cascarí, but I instead preferred to concentrate on the few whom had remained faithful in their commitment, despite all hardships.  Their continued commitment had not brought them prosperity, nor did it make their lives free from trouble.  Outwardly, one could say that their faith had brought them no benefit whatsoever. But despite these things, they continued in the Lord.


For since in the wisdom of God the world through its wisdom did not come to know God, God was well pleased through the foolishness of the message preached to save those who believe.  (1 Corinthians 1:21 NAS).


…Just as it is written, “Things which eye has not seen and ear has not heard, and which have not entered the heart of man, all that God has prepared for those who love Him.” For to us God revealed them through the Spirit; for the Spirit searches all things, even the depths of God…Now we have received not the spirit of the world, but the Spirit who is from God, so that we may know the things freely given to us by God (1 Corinthians 2:9-12 NAS).


In many ways, the Christians of Cascarí had despaired in gaining anything of substance from this life.  I really think that they did not expect their lot to improve significantly – financially or otherwise.  They worked when they could find it. And they hoped. But they had lived within the financial limits of their situation long enough that they also knew that they had to be realistic.


Nevertheless, despite the weekly prayer requests for work and for family and health, there was an underlying contentment and peace about the people there.  There was a confidence that God would adequately provide in this life.


However, the hope of a life completely free from want and trouble would be reserved for another day.  This is the type of hope demonstrated by the Old Testament saints – a hope that is linked with confidence.  Like Abraham and Sarah of old, the people of the church in Cascarí were waiting to see what God has prepared for them in the heavenly kingdom.


THOSE OF WHOM THE WORLD IS NOT WORTHY


The object of the faith of the people in the little church high in the mountains was this: “A demonstration of the Spirit and of power, that…faith should not rest on the wisdom of men, but on the power of God” (1 Corinthians 2:4-5 NAS).


I could tell that the Christians of Cascarí, because of their life of struggle and little education, in some ways felt a little inferior to the rest of the world. But I should not be surprised to see them one day being recognized for their great wisdom.


They have come to expect little from this life. They were too occupied thinking about what the Lord has prepared for them in the next.
Posted by Donald Rhody at 8:00 AM No comments:

NOT MANY WISE, NOT MANY MIGHTY


This is the portion of Scripture that Brother Luis was reading when we came in that morning: 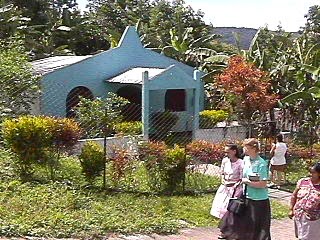 The life of a Christian was not an easy one for those people of Cascarí.  The village was known in the area for its drunkenness and the rather sordid lifestyle of many of the people.  Because of the teachings of the Bible concerning the dangers of a promiscuous life, many people of the village did not want anything to do with the church.


For several years the church had been made up mostly of young children and older people.  When the children of the village of Cascarí entered into their teenage years, they would usually yield to the pull of the predominate lifestyle of the village and abandon the teachings of the Bible that they had learned as children in the church.


It seemed to me that the life of the church, like the building itself, was hanging on the edge of a precipice. One bad shake of the moral ground would send it sliding deep into the valley below.


And yet also like the building, the church as a body of believers continued to hang on. It had for many years. The people still gathered. God sent those to help out at the church when it was needed. There was a woman who worked tirelessly in ministry with the children of the village. Perhaps without her, the church would have indeed ceased to function. It was the presence of the children that was encouraging to the older ones. 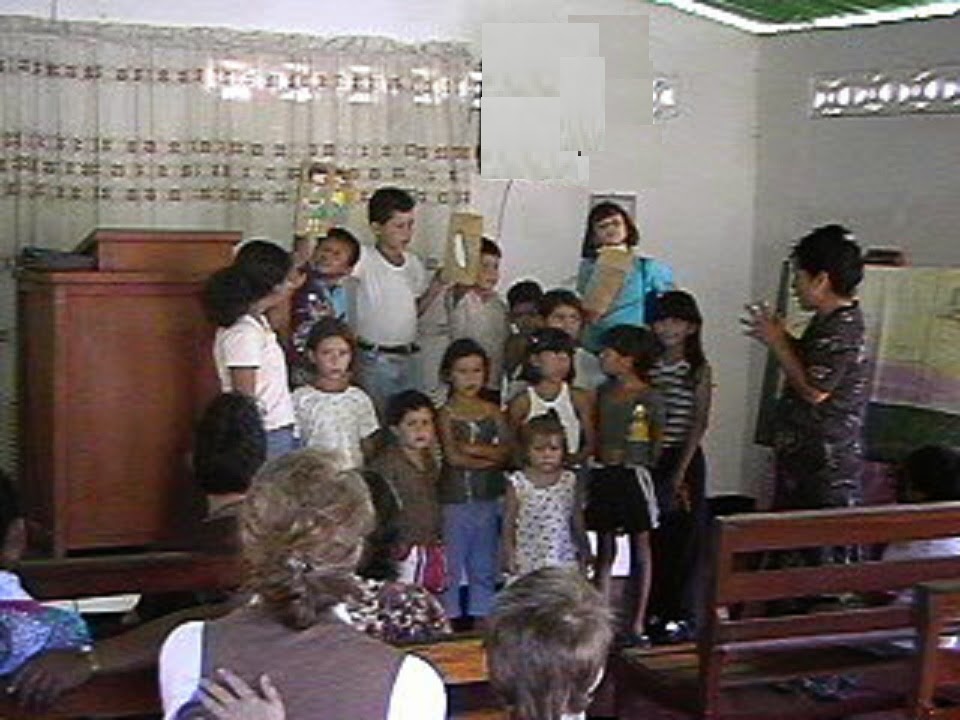 It may not have been considered a “healthy” church in modern seminary parlance. Nevertheless, as it was, every Sunday the few faithful gathered to listen to the Scriptures read and to pray together.  Since none of the men of the church had had any schooling beyond a few years of grammar school, they did not feel adequate to teach from the Bible.  So if there was a guest who came and whom they felt could bring a teaching, they considered it a provision from God.


I thought of all these things as I walked up to the front to share with them.  I had heard them read this portion of Scripture before and I think it is one to which they turned often.


In the eyes of the people in the village, the Christians seemed foolish.  In that same passage in First Corinthians it says “For the word of the cross is foolishness to those who are perishing, but to us who are being saved it is the power of God” (1 Corinthians 1:18 NAS).


The brothers and sisters of the church may have seemed foolish to the rest of the village, but wisdom is not always what it seems.  That which appears wise today may only seem so because it is viewed from the perspective of today.  However, it is only when we view our beliefs from an eternal perspective will it be shown how wise or how foolish we truly are.


(In a few days I will finish this post with: WISDOM THAT THE EYE DOES NOT SEE
Posted by Donald Rhody at 7:58 AM No comments:

Back in the days when my family and I lived in Venezuela and if I had no other commitments at other churches, on Sunday mornings we drove up a bit higher into the Andes Mountains from where we lived to the little pueblo of Cascarí. There, built on the slope of a steep mountainside, was a little church. It was to that church where we went to worship with the few people who attended there. 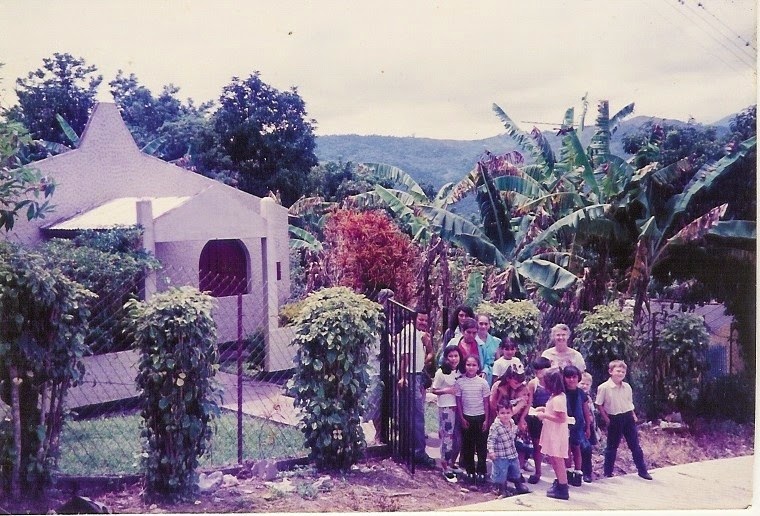 One Sunday, after we had been gone on furlough for more than a year to Wisconsin, we drove up Cascarí to attend the church and to see the people. It had been a long time since the people there had seen us and they did not know that we had returned to Venezuela.  We arrived at the service quite late, but that did not matter so much at Cascarí.  It was just a little group of believers and they were not so preoccupied with schedules.


When we arrived, Brother Luis was reading Scripture. We entered in the back of the church building and tried not to interrupt.  Most of the folks there were illiterate, so they were in the habit of listening very intently to the reading.  But of course, they could not help but note our presence, and after the reading everyone stood up to welcome us.  We went around to shake hands and to receive and give hugs and kisses.  After all of the greetings were over one of the men stood up and asked me, “Brother, did you bring a teaching for us this morning?”


The truth was that I had not.  I had not gone expecting to preach.  However, for some recent months, the church had been without a pastor.  Previous to that, and when we had left for Wisconsin, they had had a student from a Bible Institute in a nearby city who was completing his year of practice at the church.  This young man had been one of my own students at the Bible Institute and was acting as a pastor for the church at Cascarí for his apprenticeship program.


However, unknown to us, this young man had finished his time of internship and had left the church a couple of months earlier.  Since that time, the people of Cascarí had been carrying on alone.


The people that made up the church at Cascarí were few and very poor.  There was really no work to be found in the village apart from the harvest of the coffee beans once a year and working in the sugar cane fields. Some of the men of the village actually had to go to a larger town to find work and, since the distance was so great, had to live separated from their families.


Because of the few members and the poor economic conditions of the area, the church had seldom been able to hire a full time pastor. Nevertheless, the church had usually been richly supplied.  A former missionary had helped them to build a very nice little church building with a separate Sunday school building in the back of the church, and they had often been able to have students from the Bible Institute serve as their pastor from time to time over the years.

For a couple of years previous to the most recent Bible Institute student, there had been a lay pastor from Colombia who had moved to a nearby village and who had been helping them. But for the moment, there was no one. The church was without someone who had been coming to teach from the Bible.


And so it was that when we arrived after a year of absence, the people were once again without a pastor.  When we arrived late that Sunday, they asked me, “Brother, did you bring a teaching?”


Because I did not know that they had had no pastor, I had not come that morning prepared or expecting to do any teaching. Besides that, we had been so busy just getting back into the country that I had not even had time to think much about anything else.


Nevertheless, I rose to my feet and started to walk toward the front of the church, trying to think of something of encouragement that I could say to the people. Besides my general unpreparedness, I was not a long time Spanish speaker and after a year without speaking that local language, I also wondered how that would go.
(Continued in a few days)
Posted by Donald Rhody at 9:12 PM No comments: