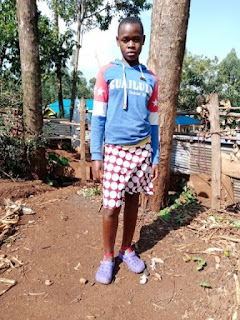 HOW WE GOT HER: FROM STREET DURING EVANGELISM

Moureen is a half cast, his father was a Luo by tribe and the mother was a Kisii by tribe. They both enjoyed marriage life together with their only daughter Mourine. The parents met and married each other while they were residing in a town behind the bus stage. They were hawkers within the stage and Siaya town at large.

They enjoyed family love until the year 2013 during political clashes when the tribe of the Luos Killed many Kisii people and destroyed properties that belonged to the Kisii people. Due to these tribal clashes the parents of Moureen broke the bond of marriage and Moureen together with her mother made their way to a place here in Kisii called Omosaria Center.

They stayed there until the untimely death of his mother who suffered from cervical cancer. Moureen’s mother by the name Everline Nyanchama succumbed to death at Lenmark Hospital while under medication. No one could identify the family  background of  Everline Nyanchama to assist in the burial of the body, not even Moureen her daughter!!

The body was buried in Nyambera cemetery and Moureen was left in the hands of her class teacher known as Madam Jack. This Madam had five children and accepted to adopt moureen too. Months later the Madam’s children started mistreating Moureen and abusing her so much even denying her food when Madam was away from home. Moureen feared to say this to Madam because she was just an adopted girl in this family!

The only option she remained with is to leave this home and went to the street for four weeks and 2 days before we met her there at Nyabisiongororo Centre terribly challenged with life. She accompanied us to Martha’s home where evangelism was to begin that day and we discovered that she was a humble and kind   girl who seriously needed help and care. 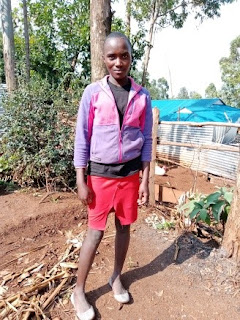 HOW WE GOT HER: FROM STREET DURING EVANGELISM YEAR SHE CAME TO THE ORPHANAGE 2018

Damackline’s grandmother was not married; she was blessed by only one child known as Nyakerario{the mother of Damackline}.

Nyakerario got married and years later the marriage broke after the death of her husband. The  family of Nyakerario’s husband did not recoginize Nyakerario and her  daughter Damakline by reason that she was a second wife. They had never before visited the husband's family since they were in another town, but after his death they learned that he had also another wife!

Nyakerario and her daughter Damackline could not be accepted to be part of the  polygamous family and they were denied this right and access to this family. Nyakerario left her daughter on the street in the year 2016 and disappeared to date!!

We went with some food and clothes and by good luck we met her. She was very much excited to see us and she ran from a distance to greet us. This day we made up our minds to include Damackline in the orphanage and trusted God to strengthen her health. She is now very okay by the grace of God.

Damackline is extremely thankful for protection and care she receives through Pastor Donald and the church of Kenya. Damackline always refers the orphanage as “wonderful home”. She has a desire to be a gospel artist after school 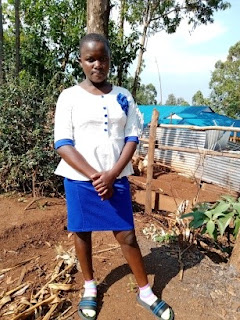 YEAR SHE CAME TO THE ORPHANAGE:2018

FOUND: IN THE STREET DURING EVANGELISM

We found Yvonne in Kembua Street in the year 2018 February. This girl had been in this street for six months before we meet her during evangelism. It is said that she was raised by her aunt from childhood after her mother died. This aunt was childless but could support Yvonne as her daughter.

One unfortunate day when Yvonne came back from school, she and found no one in the rental house where she used to stay with her aunt!!. Yvonne was raised in the town of Kebirigo and didn’t know any relative throughout her life!!! This girl was shocked to find an empty house where they used to stay!!

She tried to inquire from neighbors what had happened but no one could tell the story, eventually one of her friends told Yvonne that her aunt migrated to a place called Kembua. She had only Kenya Shillings 150 in her pocket and she used it as bus fare to this place Kembua looking for her aunt. She could not manage to locate her aunt.

Now being in a new town she found it very difficult to interact with strangers in this new town. This is where she started a new difficult life in the street being homeless and starving without food most of the days until the 6th month when we meet her during evangelism and she demanded our attention and help.

After interrogating her we took a taxi and travelled to Kebirigo where they used to stay with her aunt before but the result was not that good, because the rental house was still empty!!!We decided to adopt Yvonne in the orphanage and now she has the joy of our Lord Jesus in her life. She was at the risk of being raped and ambushed in the street but now she is secure and she is cared for.

Yvonne is appreciating God for the hand of support from Pastor Donald and she is very happy to be in the orphanage .She is one of the talented singers and wants to praise God through her talent to save the lost souls.

*********************
If you would like to help the children of the Log Church Orphanage of Kisii, Kenya, you may make your check out to “The Log Church” and write “Orphans” on the memo line.
Send it to:
The Log Church
PO Box 68
Tripoli Wisconsin 54564
We now need to pay a wire transfer fee with every payment, which amounts to $50 each time, but other than that, your donated money will be used only for purchasing food, clothing, schooling, and other necessities of living. Nothing is held back or diverted for any other purpose. Thanks!
Posted by Donald Rhody at 7:10 PM