CORABELLE'S DEATH IN THE WILD

THE AWAKENING OF A SHEPHERD’S HEART


The predator expert who came out to look at my dead calf told me it was a coyote kill, not a wolf. He showed me the bare leg bones and the ribs, not ripped apart or crushed.

A couple of Sundays ago, part of my sermon in our church dealt with the shepherd boy David as he told King Saul how he had saved his lambs from bears and also from lions. He told the king that when the lion rose up to kill his lamb, he “grabbed the lion by the beard and smote him until he died.”


I commented in my sermon that had I been in a similar situation, I probably would have let the lion have just that one lamb. I realize now that I may have been wrong in that self-assessment. I do not claim a sudden extraordinary bravery, but I spoke at that time more as a disinterested observer. With the death of my calf, I have come to understand that David acted with the heart of a shepherd.

My little calf Corabelle had been a long-awaited calf. Not only did we wait so long for her to be born this year, but I have been waiting for three years. I bought her mother Cora three years ago when I started buying cows for my herd. Cora was already old when I bought her, but she was such a nice animal, and although no longer possessing the body of a youthful cow, she had a regal air about her. As she walks, she holds her head up high, as if she were an age-ed queen, walking before her subjects.


In the three years that I have had her, Cora has given birth to three calves. Every year I hoped for a heifer, but for two years she had given me bulls. Royalty in human institutions have historically wanted boy children to carry on the royal line, but I wanted a girl. I wanted a heifer to carry on Cora’s line. This year she finally arrived – less than one week ago. Vivian named her Corabelle.


This morning as I walked out to see my cows, Corabelle was not with her mother. This is not altogether unusual, since the mother cows sometimes leave their calves sleeping while they graze. But that was not all that I noticed. Cora’s udder was very full and it looked like her calf had not nursed for some time. I became worried. I went down into the woods that comprises part of the pasture where the cows had been, inwardly knowing what I would find. Somehow, I walked right to the site without searching around. There on the ground was the head of my Corabelle, with the bloody spine and leg bones attached. Everything else was gone.


Suddenly, I realized another dimension to having a shepherd’s heart, or in this case, a herdsman’s heart. My thoughts were not on financial loss, they were not how this impacted my plans. Much to my astonishment at my own actions, I just began wailing for this little life that had been lost. “My little Corabelle!” I cried over and over again.

The Awakening of the Shepherd's Heart

There are a couple of things that I must say here. The first is that I know that there are other tragedies that are exponentially more heart breaking that this one. “After all,” we could say, “It is only a farm animal and not a person.”


I know that this is true. I am not trying to compare the two. I only wish to say that this incident taught me something about a shepherd’s heart. When I was a boy, growing up on the farm, an unexpected or tragic death of an animal was something that happened from time to time. That is the reality of farming. This has always made me a bit sad, but never do I remember being as painful of heart as I did with the death of my calf this morning. It brought something out in me that I did not even know about myself.


It also helped me to understand how David could grab a lion by the beard and smite him until he died. There was no calculation on the part of David in doing this, no weighing the consequences. David was responsible for the sheep, and he would protect them and save them.
****************

One winter day many years ago, when two of our sons were very small, Vivian came out to the woods where I was logging to see me. She was pulling a sled with the two boys in it, one of them about two years old, and the other only six months. Suddenly, she came upon a wolf, standing off to the side of the logging road. The wolf looked at her, and she at the wolf. Both Vivian and the wolf stared into the eyes of the other for a tense moment or two. Finally, the wolf put his head down, turned around and trotted off into the forest.


Vivian told me later, “If that wolf would have attacked my boys, I would have killed it with my bare hands.”


I believe she would have. Apparently, so did the wolf.


This is the heart of a mother, not a shepherd or a herdsman, but the need to protect those for whom you are responsible draws its energy from the same source. That is why, when there is a loss, the heartbreak is so severe. As I said, exponentially more severe is the loss of a child, but even with my calf, I was astounded to feel such grief.

Here is something else that this incident has taught me: I better understand what Jesus meant when he said, “I am the good shepherd. A good shepherd lays down his life for his sheep.”


What I understand better today than I did yesterday is that we have no idea the lengths to which Jesus will go to save us. Indeed, he did lay down his life to save us, but in a certain way, that same protective heart of the shepherd continues to go to any lengths to bring us to safety. He loves us more than we can ever comprehend.


Another thing that I understand better today than I did yesterday is that we also have no idea the grief that Jesus feels when one of us is lost, snatched up in the jaws of Satan. I was astonished at myself, how I wailed almost uncontrollably for this little lost calf. I cannot imagine the pain of our good shepherd when one of his is lost. 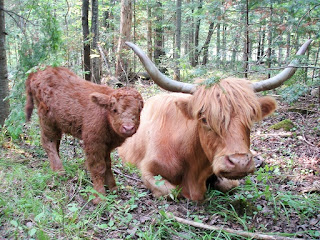 Posted by Donald Rhody at 9:44 PM No comments:

March 30, in the afternoon – The day of Effie

Effie was the first of my herd to give birth.
I found her calf lying on the cold spring earth.
The mother acted quite congenial this year,
Letting me pet her newborn calf on the ear.

Flory is Effie’s calf from two years ago,
She wisely waited until after the snow.

Today at midday, in the warm April sun,
She had her little calf – it was her first one.

April 24, just at the new dawn – The day of Maisie
Today as the sun was coming up yellow,
I heard my Maisie voice a fearful bellow.
She had just had her first calf up on the hill,

When two wolves appeared; they were ready to kill.

McTavish was there; he’s our bull of large horn,
Ready to protect one so recently born.
I also ran up. I was armed with my gun.
I shot and missed, but they set off on a run.

Our calves are now three, small bulls once, twice and thrice.
Bull calves are fine, but a heifer would be nice.

April 26, another early morning – The day of Agnes

This morning I went out to check on my herd,
Although during the night, they said not a word.
I counted the calves – one, two, three, but then four.
Our Agnes had given birth to one more.

When I tried to see this one born in the night,
The mom came at me as if ready to fight.
My neighbor tells me, “The wolves make them this way.”
“Cows were much calmer,” he says, “back in my day.”

But the good news is, from what I could see,
Agnes gave me a her, instead of a he.

Oh Cora, like last year we waited so long.
I know you are old now, and are not so strong.
But the wolves are gone – it has been a month now,
And McTavish and I would fight for our cow.

June 26 – Still waiting
One thing with Cora – she cannot be hurried.
But I must say, I’m a little bit worried,
Worried that something had developed amiss.
Cora is old, perhaps too old to for this.

But Cora lies chewing her cud unconcerned.
With age comes patience, and there’s much she has learned. 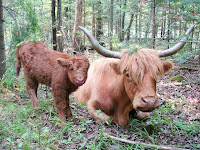 Today I saw Cora off standing alone
Away from the herd and just out on her own.
This is not common for my gregarious cows.
My interest was stirred, my excitement aroused. 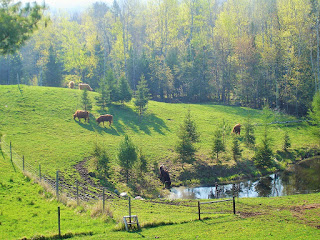 Posted by Donald Rhody at 8:17 AM No comments: