IT TAKES A HERD - PART 2: MAISIE AND THE WOLVES

MAISIE AND THE WOLVES

This morning, before the sun had risen above the trees, I woke up to the sound of a cow bellowing. She was in the paddock across the little valley to the east, in front of our house. Our bedroom is upstairs and faces the valley, but I could see nothing from the balcony outside our bedroom.
From that balcony, there are many tree branches that block my vision, so I went downstairs and stepped outside to where I could get a clear view. I did not like what I saw.


Our heifer cow, Maisie, was standing on a rise in the paddock. It was she that was bellowing. I had been expecting her to be having a calf this week, and I suspected her vocalizing had something to do with this. It would be her first. But when I saw the reason for her bellows, I became frightened for her. There were two wolves also with her in the pasture, running back and forth and circling her.


Seeing this, I myself bellowed. Not the same as Maisie, but I yelled as loud as I could. But the wolves were far away and I knew that they would need a louder sound than my own voice to frighten them. I ran back to the house to get a rifle.


I don’t know what the present law is for shooting wolves. It goes back and forth. But I was not really shooting for the kill. At that distance, and with the wolves running, I knew that I could never hit them anyway. So I just shot in their vicinity, but not to hit anything. The sound of the shot was enough, even though it was a small caliber rifle. The wolves ran into the woods.


Most of the other cows were up by the barn, but McTavish, our bull, was not. Although I had not noticed him at first, he was down by Maisie and facing off the wolves. As I stood there, the other cows now started down the valley to go out to where Maisie was. I expected that there would also be a calf lying there, but I wondered if it would be alive.


I was in my pajamas and bare feet, so I ran back in the house and put on my jeans and boots. With the rifle still in my hand, I followed the rest of the herd up the other side of the valley. Maisie seemed to have settled down.


By the time I got to her, all the cows were gathered around, 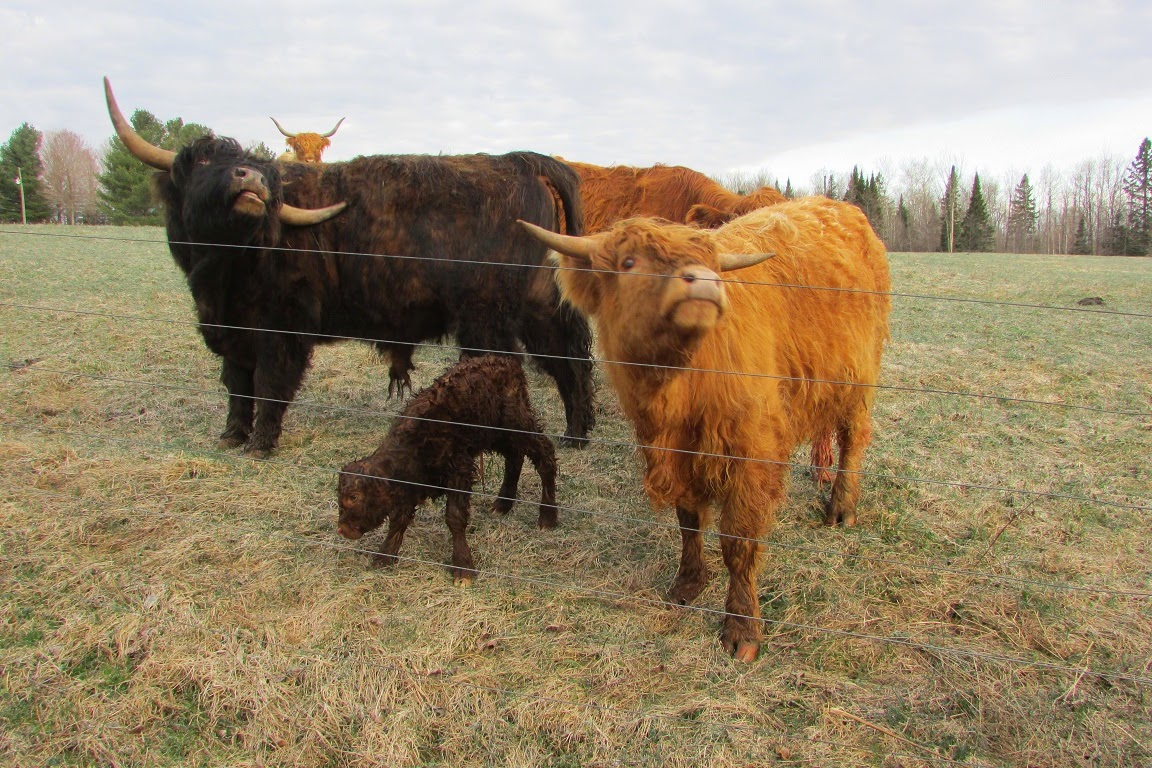 looking at and sniffing a little red calf that was lying in the short grass. There was also blood around the spot in the field. At first fearful at what I might find, as I approached the newborn, I could see that the calf was fine. It was alive and seemed healthy, still wet from the birth. The blood on the ground was that of the birthing process.


I stooped down to rub it a little and to check it over. A little bull calf. McTavish seems to be following the Rhody tradition. He has mostly boys.


Maisie was also fine. A couple hours later, she had her first calf nursing from her. She will be a good mother.


I will have all the cows and calves up by the barn tonight. 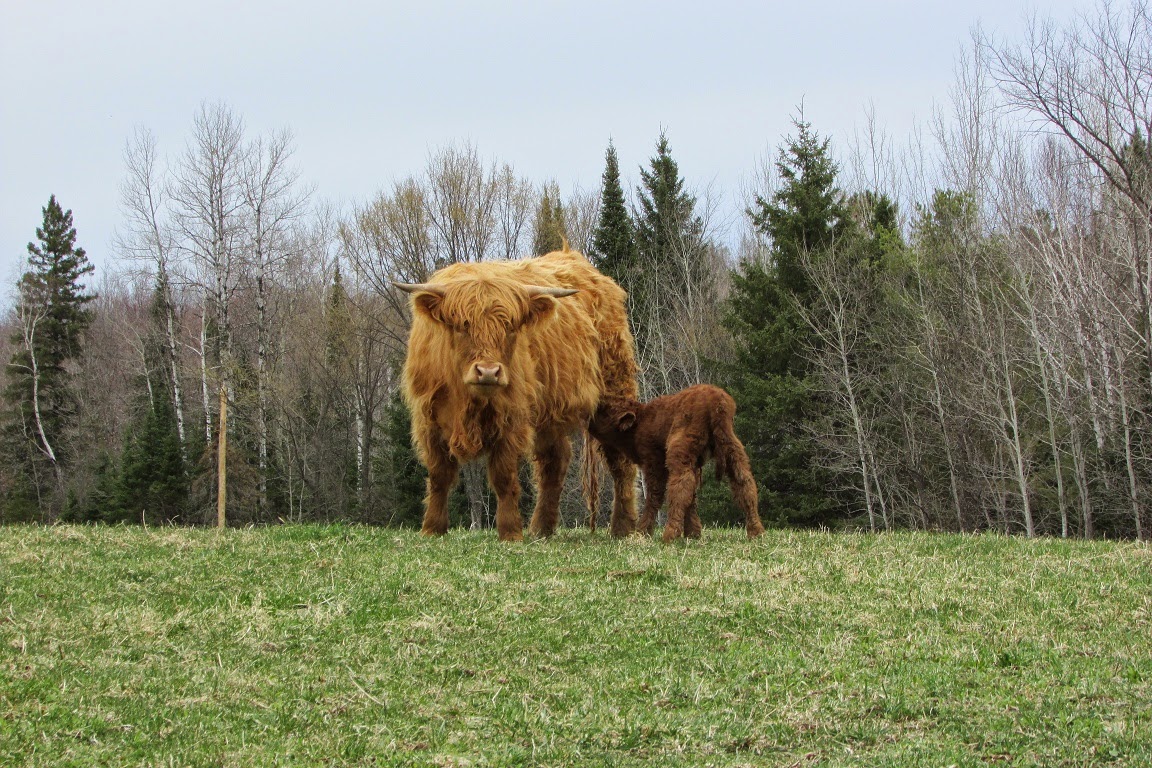 Posted by Donald Rhody at 7:59 PM No comments:

IT TAKES A HERD

Yesterday, our young cow Flory was standing down in the valley next to the pond. She was bellowing repeatedly with her cow-like bellow. It seemed that she had lost her calf.

She had this calf only two days before. It was her first one. On that day, I also heard her bellowing, but at that time she was farther in the valley and into the woods. I went to check on her, since it is not common for cows to stand and bellow for no reason.


When I got to her, she was standing in the middle of some small maples with newborn calf. The calf must have been born some hours earlier, since it was already dried and lying like a little furry ball in last autumn’s leaves. Flory was standing over her, looking quite pleased with herself. The bellowing had stopped and her only words now were softer moos. 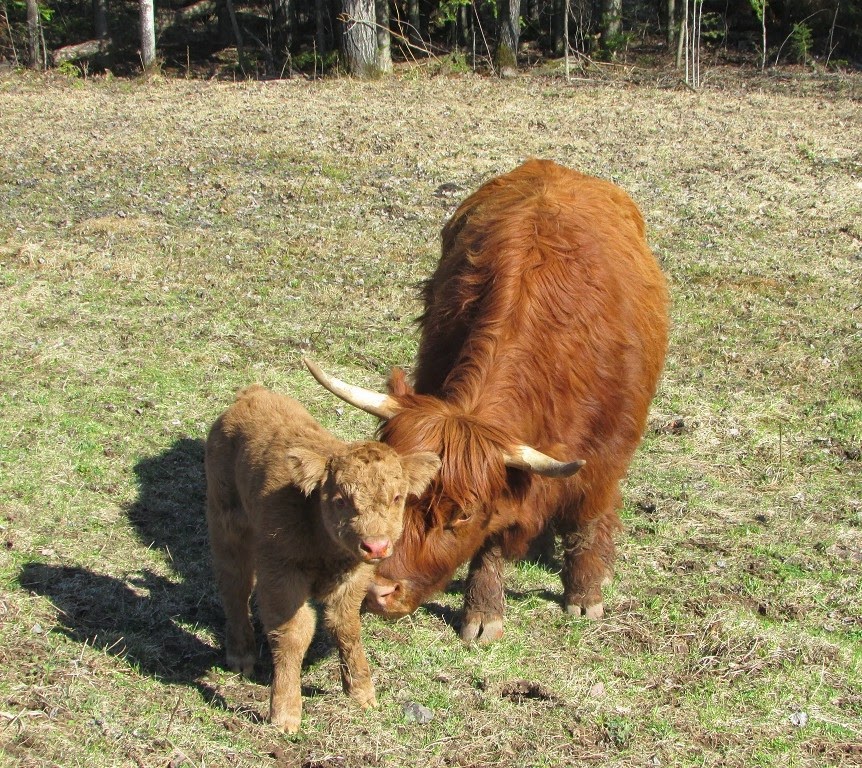 I left the two of them. Flory seemed to be doing well with her new role as a mother, so I thought that I should let nature dictate how she should care for the calf. I went back up to the barn, where I had my own concerns that I was working on. 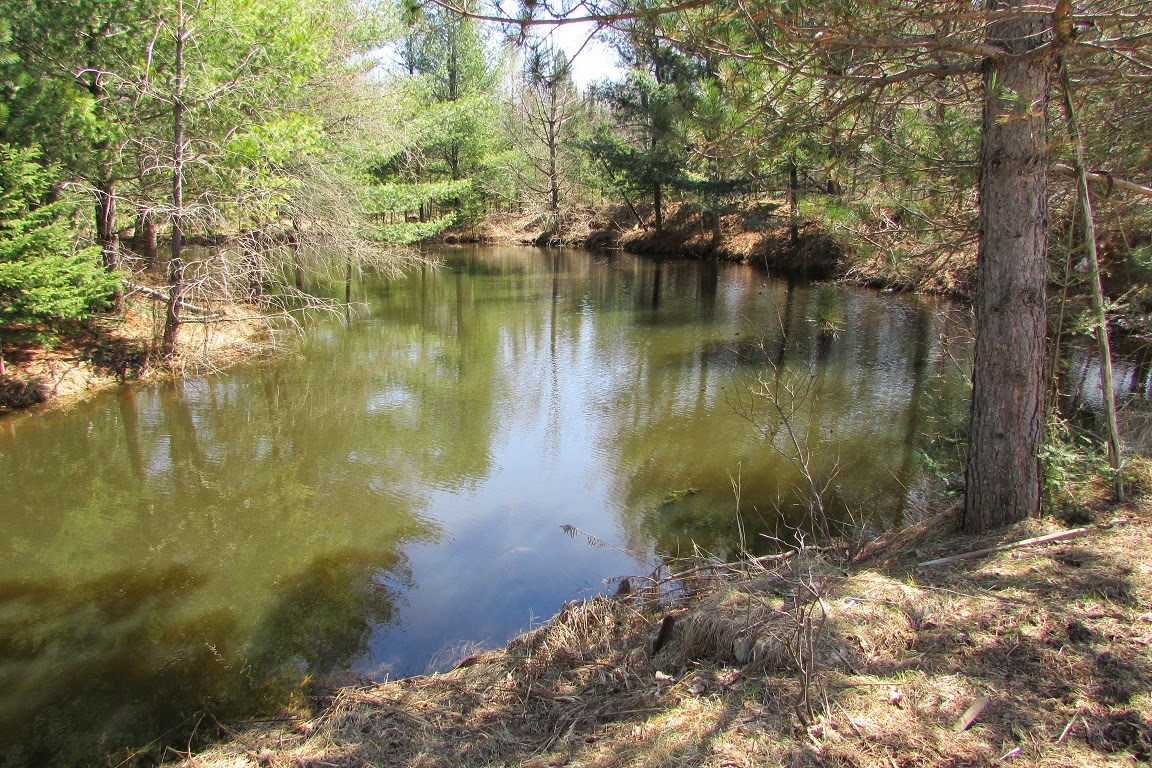 I do have a fear about my calves this year, however. The pond in the valley has very steep banks, banks down which a newborn little calf could easily roll. Just a couple weeks ago, another of my cows, Effie, had her calf right on the top of the bank.
I was also home when that one was born, so I went down and moved the newborn far  away from the water. However, an hour later when I went to check on the little one, he was again right next to the pond, this time on a narrow trail that is right on the water’s edge. Again I moved him. I ended up moving him three times before Effie was satisfied that where I put her little calf was better than where she put him.


But now, Flory was standing next to that same pond with a fearful (it seemed to me) tone to her bellow. I went to the pond, walked all around it and peered into the water, still icy cold in this early spring. I saw nothing, but I wondered if a calf, having fallen into the pond, would sink out of sight. Hoping that this was not the case, I next set off to the place where I had earlier in the day saw Flory emerge from the woods. Flory followed me.


Not only did Flory follow me, but our bull suddenly took an interest. He is named McTavish. He has wide horns that 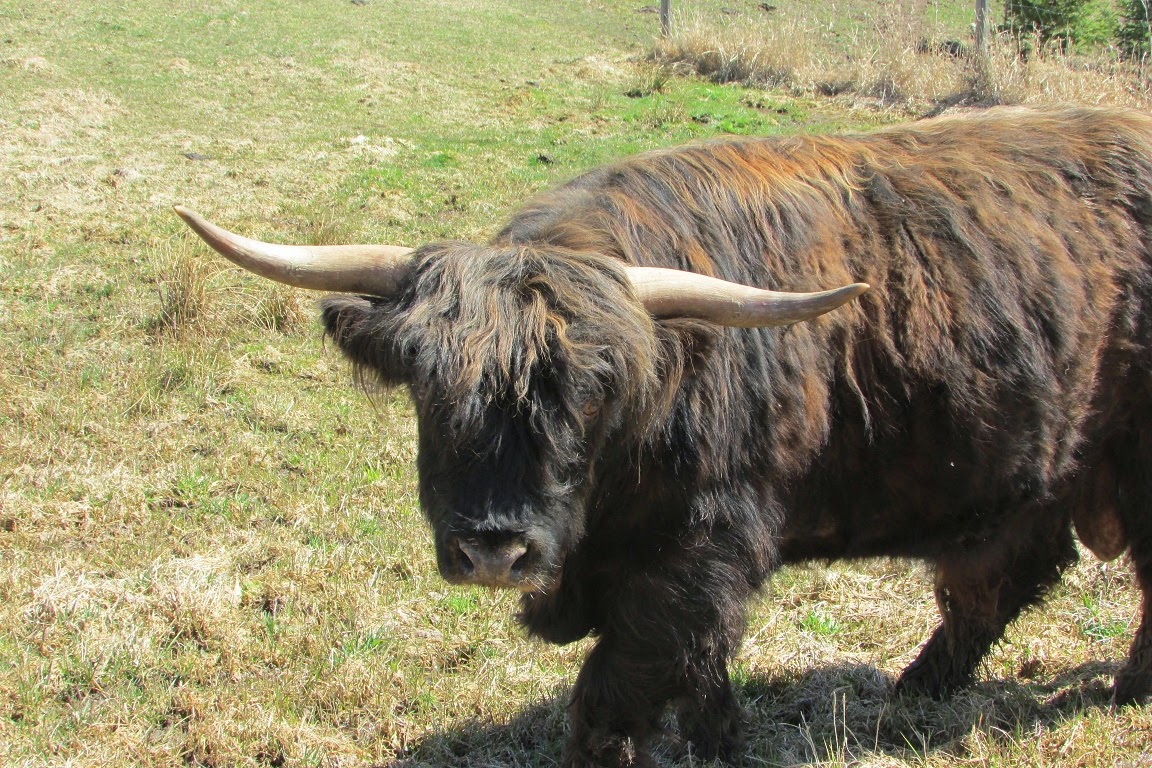 emerge from a forehead of long hair that hangs over his eyes. He has a very fearsome look, but he is really not aggressive at all. He is, as are all my cows, Scottish Highland cattle, which are quite docile by nature.


McTavish is also the father of this new born calf. In the cattle industry, they do not say “father,” but rather that the calf was “sired” by McTavish. But because of this interest that he showed in the lost calf, I think that perhaps father might be a better term in this case.


Not only did McTavish begin to follow me into the woods, but also Flory’s own mother, the grandmother of the newborn. This cow, as it happened to be, was the same Effie with whom I earlier had a discussion about leaving her calf so close to water’s edge. Effie also was the mother of Flory, who had given birth to her two years earlier near the same spot where Flory had her first calf. Flory had also been Effie’s firstborn.


So we all went down into the woods. I, followed by Flory, then McTavish and then Effie. The rest of the cows did not 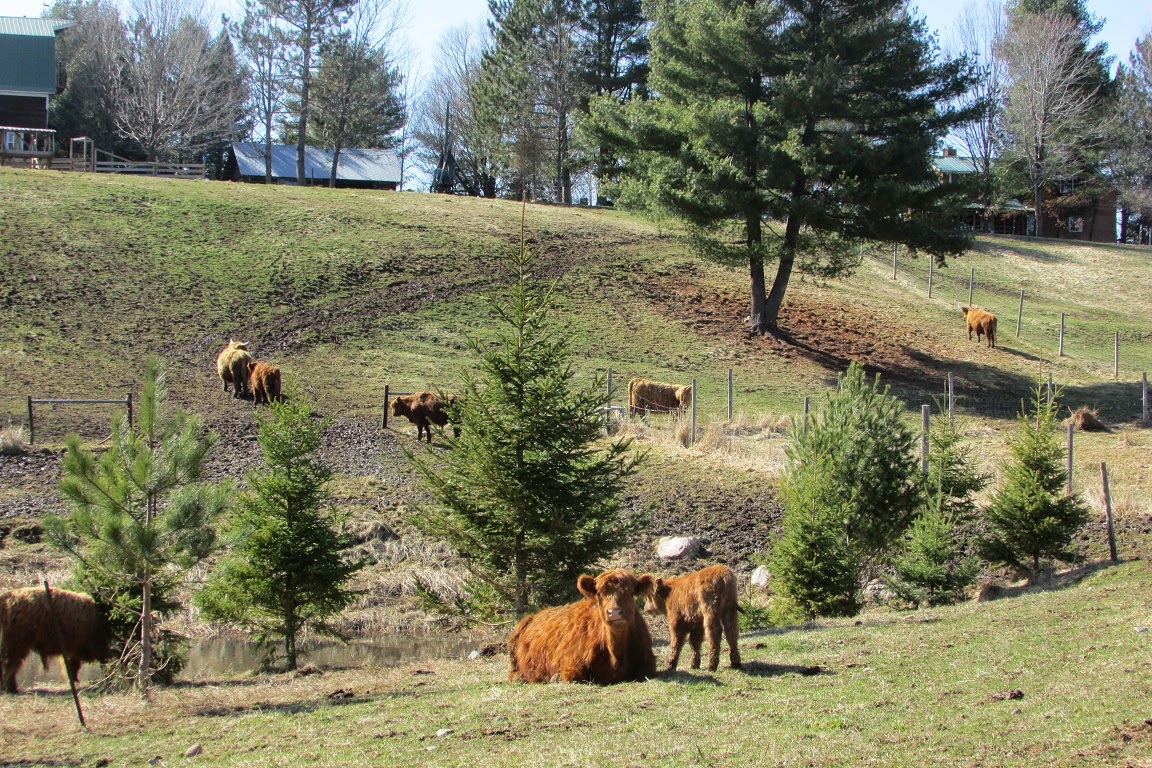 
I did not have any idea where in the woods I should search for the calf, but the ground is still muddy in this early spring, and I looked for fresh hoof prints. I don’t know if I saw the right prints, but it turns out that I was successful in approaching the general area where Flory had left her calf, because when I was about fifty yards away from where the calf lie, Effie seemed to remember the place. She ran ahead of me, followed by McTavish, and then by Effie.


I watched as the two-day old calf rose to his feet when his mother came near, and immediately start sucking on Flory’s 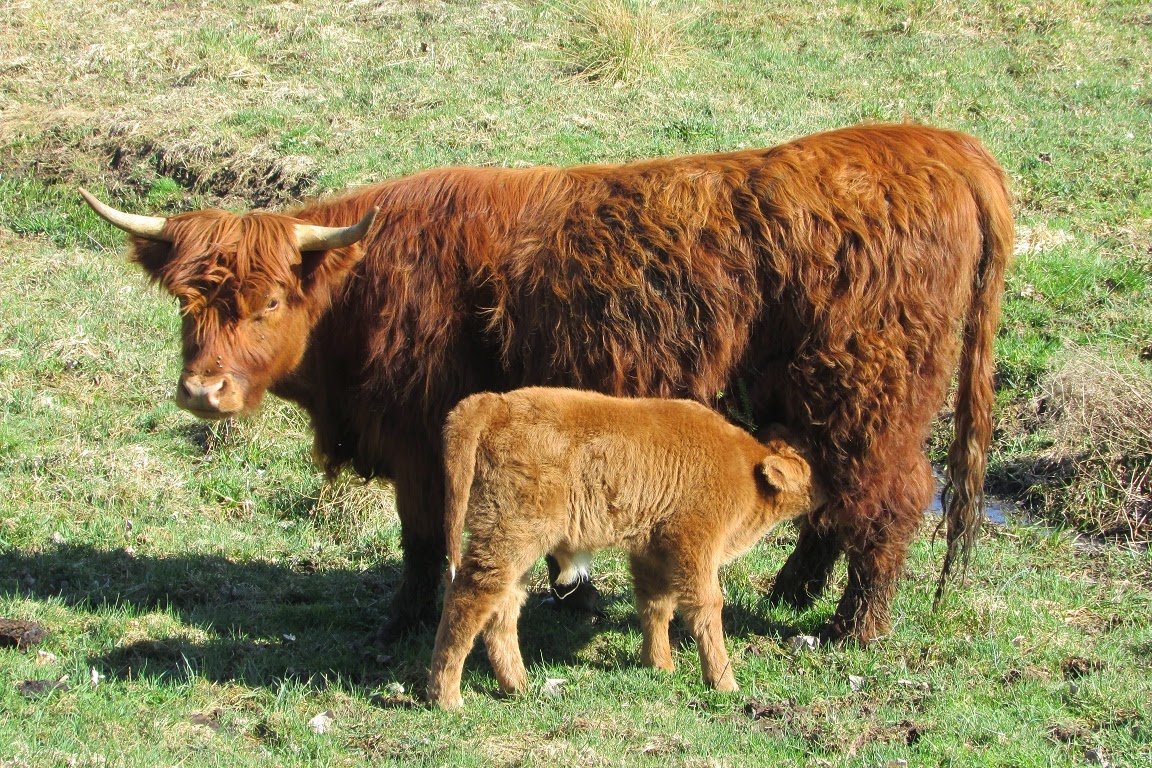 full udder. I stayed for a couple of minutes, then headed back up the hill to the barn. I was followed by McTavish and then by Effie. Flory’s bellowing had stopped. She now just gave contented moos as she stayed in the woods nursing her firstborn. 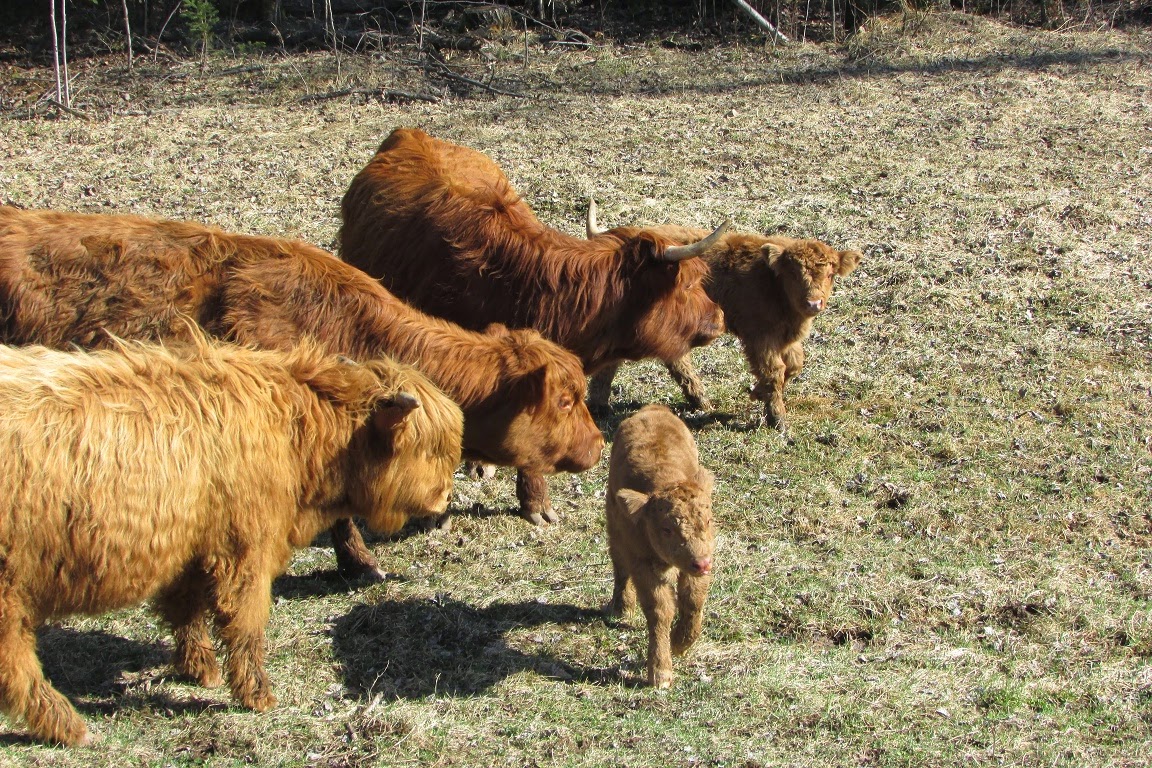