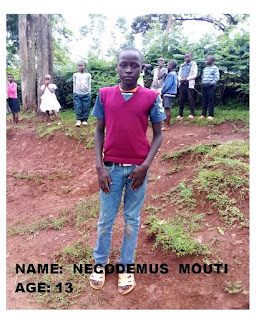 YEAR THE CAME TO THE ORPHANAGE 2018

Necodemus ‘s mother was a commercial sex worker. She lived in one of the rooms at Exchange Bar. Her family background was not known but she came to this bar in the year 2016 with her son Necodemus. This boy was enrolled at Orencho academy in grade 3, although his mother was so immoral she could support her son to attend school.

In the year 2017 Necodemus’ mother was hijacked at around 8pm with three men and one lady who had a black tinted car. They called themselves to be police officers from Igare station and they claimed that Necodemus’ mother had a case to answer to. It is sad news that when the neighbors visited Igare police station the following day in order to know the crime of Necodemus’ mother, they realized that those people were not police.

It was terrible that those people had gone with Necodemus’ mother to unknown place and this is when people came to know that Nicodemus’ mother had been hijacked!! Nicodemus was abandoned and his mother went missing and is still missing to date!!!

We adopted Nicodemus to the orphanage in the year 2018 February. Nicodemus is delighted to receive care and love in the orphanage through Pastor Donald and the church of Kenya. He is a dancer in church and after school he would like to use his talent in giving God Glory. 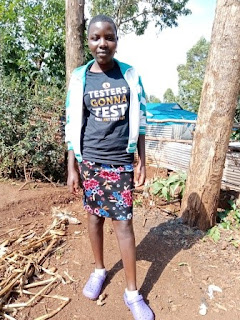 Happines was raised by a single mother known as Caroline Nyamusi. They lived in Kericho Estate where her mother was a casual worker in tea plantation. She had a good relationship with her mother until, when her mother committed a crime of stealing a neighbor’s cooking gas and Happines reported the issue to the gas owner. She led the gas owner to where her mother hid it.

It was her mother’s secret place but she revealed the theft and she was the witness of the case against her mother to the end. According to Happines’ statement, her mother had become a thief for several years and Happines had often cautioned her to stop the vice but she despised.

Now Happines decided to disclose her mother to the public so that she can be a shamed and reform from that habit. Caroline, the mother of Happines was found guilty and paid a fine of KSH 5000 /= during and after the case hearing Caroline rejected her own daughter Happines, and sought to kill her by poison but close neighbors from doing any harm to her daughter.

It was in the year 2017 November when Caroline seriously and thoroughly beat Happines to almost half dead!! She was reported to the Ibencho police station and she disappeared to avoid being arrested by the police officers. Caroline was nowhere to be found until when she was announced dead in the news and her body was buried in the cemetery since she did not have a home.

We found Happines almost deciding to go to the streets to beg food for her survival and we feared this girl might be raped since she was coming to age and we offered to adopt her into the orphanage.

Happines is greatly thankful for shelter, food, clothing and education through the courtesy of Pastor Donald. She is happy to attend school that could have been a great challenge if she was in the street. She has forgotten how the way her mother rejected and mistreated her and even beat her.

This girl always pray God to protect and guard the family of Pastor Donald and all well-wishers. She likes teaching the word of God and she has a passion to be a teacher of the word after school. 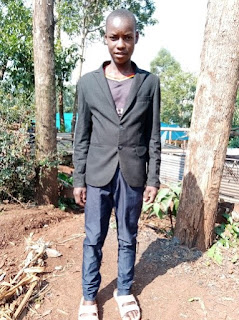 The family of Edmond lived in Ngararo. This town Ngararo is bordering Kisii tribe and Maasai tribe. Our Kisii community and the Maasai entered into border wars and the Maasai burnt houses of the Kisii and killed many residents of our community who lived at Ngararo border. Edmond’s parents were killed and his two siblings during this war.

Edmond escaped the death narrowly and came to Magena town. He passed through hard times. Most of the days he could go without food, his clothes were ragged and he slept at Magena Bodaboda shed on the floor.

When we were doing evangelism we met with Edmond being unconscious and the Spirit encouraged us to nurture this boy. We bought him some meals and we preached to him and surprisingly enough he accepted the Lord Jesus as his personal savior!!

Edmond requested us not to leave him helpless in the street and we decided to bring him into the orphanage. We took him to Riangakwara primary school and he was enrolled in grade six. Edmond is very much excited to belong to the orphanage family and he is thankful to God for using Pastor Joel to rescue his life.

He is grateful for every support he receives from Pastor Donald and the church of Kenya too. Edmond is talented in composing songs and he has used his talent to strengthen the orphanage kids spiritually. He wants to be a Pastor after school.