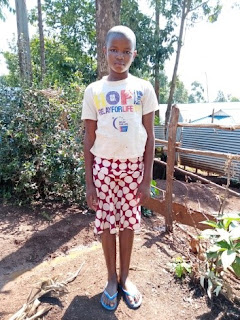 SHE CAME TO THE ORPHANAGE 2018

Syliviah’s mother was a very careless drunkard!! She was alcohol addicted. Although she was always drunk after work, she used to support her daughter with the basic needs such as food clothing and also education.

The landlord was now impatient and cruel enough to chase away Syliviah from her home! Syliviah became helpless and later after months of her hustling she visited our church during Sunday service after which she told one of our ushers called Isaac about her terrible life experience!!

She was given a chance to speak in front of all the believers and we were all touched and moved by her situation and through the sympathy and the mercies of God we could not let the girl go back to a miserable life in the street but we retained her and took her to the orphanage facility and in the following morning our two church elders went with her to the landlord to know the story and they came up with the very same information from the landlord.

We opted to allow Syliviah stay with other kids in the orphanage and now she is ever smiling for the provision she gets and the love in the orphanage facility. She has hope of finishing school and she has a passion of becoming a teacher by the grace of God. 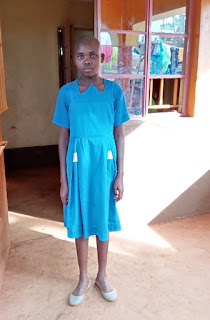 Yvonne was raised by a single mother in Mabera town. Her mother was known as Isabella. She rejected her daughter Yvonne for no reason!! She could hit her and drag her often without cause! Every day she could tell her daughter Yvonne to leave her house!!

But Yvonne had nothing to do and she endured the suffering and rejection. It was on a Wednesday the year 2007 November when Isabella hit her daughter Yvonne until the neighbors were angry and they also in return captured Isabella and beat her so hard. She was beaten by mob justice for what she had done to her daughter. The mob justice was angry because Isabella had beaten her daughter Yvonne until she became unconscious and blood was coming out of her nose!!

They ordered Isabella to vacate her rental house in their town because of that vice and look for somewhere else to stay with her daughter. They also cautioned her not to reject her daughter Yvonne and stop treating her daughter in this evil manner. Three days late Isabella left Mabera town and went to stay at Riosiri shopping center with Yvonne.

Immediately they arrived in their new rental house Riosiri, Isabella totally rejected her daughter and hated her more than before!!! She never wanted to see Yvonne anymore and could not allow her step even at the door of the house. Yvonne went to the chief’s camp and reported the issue and the area chief cautioned Isabella not to mistreat her daughter Yvonne.

She came down and listened the chief and allowed her daughter to sleep in that house but sad enough the following morning Isabella disappeared from that new house to unknown place leaving only Yvonne helpless and without even food. Yvonne struggled in this house for one month facing a lot of difficulties and challenges until when we met her in a miserable situation and adopted her into the orphanage.

Her family background is not known and her mother is still missing to date! Yvonne is excited to belong to the orphanage where she receives support from Pastor Donald and care from Pastor Joel among other leaders. She likes dancing in church and she wants to be a trainer of gospel song dancers after school. 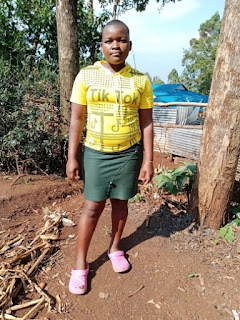 Maryjane’s mother lived in Kitale squatters; she was a single parent of Maryjane. Her mother lived in this government land illegally since the year 1992 when Maryjane was not yet born. This is the place they called home. In the year 2007 Maryjane was born. She was the only surviving child since her elder siblings had died in a tragic road accident!!  She was under good care of her loving mother for several years.

In the year 2014 her mother died after they were evicted by the government from this land; it was a stroke ill and she was buried in the cemetery!! A good Samaritan took Maryjane as her daughter so that she can nature and support Maryjane until she becomes a grown up. Maryjane enjoyed good care under new environment from this Samaritan by the name Mogusu until November the year 2016 when Mogusu schemed to sell Maryjane to someone for only 75,000 Kenyan Shillings (about $750).

When Maryjane received this evil report. She ran out of Mogusu’s home fearing to be sold to someone who eagerly wanted a female child. She joined street life whereby another volunteer begged to adopt this girl Maryjane but she totally refused thinking that it was a trap and a scheme planned by Mogusu!!

She refused to join any other family and remained in the street. This is where we found her in the following year 2017 January and when we heard her story we felt like crying and she accepted to be part of the orphanage here. She has been here in the orphanage and she now has hope of life together with other kids. She is very much thankful for the support from Pastor Donald and the church of USA she likes reciting memory verses and poems. She has a passion of becoming a missionary after school.

*********************
If you would like to help the children of the Log Church Orphanage of Kisii, Kenya, you may make your check out to “The Log Church” and write “Orphans” on the memo line.
Send it to:
The Log Church
PO Box 68
Tripoli Wisconsin 54564
We now need to pay a wire transfer fee with every payment, which amounts to $50 each time, but other than that, your donated money will be used only for purchasing food, clothing, schooling, and other necessities of living. Nothing is held back or diverted for any other purpose. Thanks!
Posted by Donald Rhody at 7:40 PM