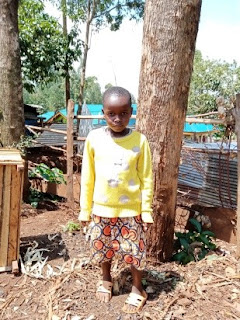 FOUND: IN THE STREET DURING EVANGELISM

Knight did not see her biological parents since she was found thrown in a rubbish bit of Nyambera in the year 2014. By then she was a kid of only six months old!!! An aged woman of 51 years adopted Knight and volunteered to take care of this young kid. This woman was known as Pamela Nyaboke and she lived in Itumbe town where she used to sell oranges and tomatoes for a living.

Pamela was raised in a family of conflicts and the conflicts increased after the death of her parents in the year 1992. There was total misunderstanding and disregard between Pamela’s brothers and sisters. Pamela was later chased by her brothers from their home whereby they were raising questions asking why she was not married and she was of age!!

They drove her out of their compound mercilessly. Pamela was childless and she adopted Knight from the rubbish bin many years later while staying at Itumbe. She met with Knight in the rubbish bin on her way from Daraja market and adopted her. She loved Knight and called her “granddaughter.” Pamela managed to nature this young girl Knight giving her good care until when she unfortunately died after suffering for a short period of time!!

After the death of Pamela, her brother by the name Fred offered a grave site to bury the body of Pamela through the intervention of the chief area. These families refused to adopt Knight from their sister!! Knight was now four years old when Pamela died. This is where Knight’s life changed to the worst and she was left alone in Itumbe town whereby she started wondering in the streets without help and she was homeless.

During evangelism, we met her and we had compassion on her and brought her to the orphanage. She is now happy to get shelter, food, clothes and education, based on the help from pastor Donald and pastor Joel she desire to be a nurse and in church she likes reciting memory verses. 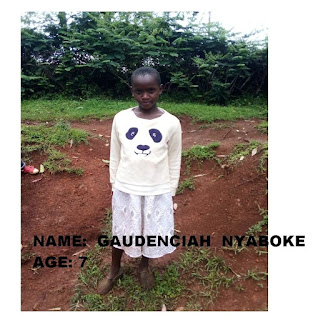 Gaudenciah was raised by a single young mother. We are told that Gaudenciah’s mother was called Jennifer Moraa. She came to live in Kenyenya town from Nyamache Shopping Centre in the year 2017 with her daughter Gaudenciah.

They started life in a rental house near Kenyenya market. Gaudenciah’s mother used to wash clothes for people to earn a living. In the process she was engaged with a certain man. This man promised Gaudenciah’s mother marriage but with a condition that only if she had no a child.

This forced Gaudenciah’s mother to reject her own daughter so that not to break the relationship with the man she loved most. She was totally changed and cautioned her daughter Gaudenciah not to call her “mother” but instead use the name “Aunt“ to call her!!! Gaudeniciah ‘s mother made sure that the name “mother” could not be spoken in the presence of the man who she was in love with and had lied to him that she was childless !!. This is because she wanted to secure her love with the man.

She now started mistreating her own child Gaudenciah and earlier January in the year 2018 she decided to boycott her daughter Gaudenciah and went missing with that so called “Husband” to unknown place.

Two months later we heard this story that Jennifer had abandoned her daughter intentionally simply because she was in love with a man who could not marry her with a child. Gaudenciah was abandoned alone in the rental house having nothing to eat and the land lord was about to lock her outside of that house.

When we had evangelism in that flat we asked someone to adopt Gaudenciah but no one was ready to take Gaudenciah because they feared her mother who was very harsh and could easily fight people. We adopted Gaudenciah to our orphanage.

Gaudenciah is now staying in the orphanage and she is comfortable to be with other children in this building. Gaudenciah had given up but now she is smiling for the care and help in the orphanage through Pastor Donald. She likes playing a drum and she can sing very well. She wants to be a gospel artist after school.

*********************
If you would like to help the children of the Log Church Orphanage of Kisii, Kenya, you may make your check out to “The Log Church” and write “Orphans” on the memo line.
Send it to:
The Log Church
PO Box 68
Tripoli Wisconsin 54564
We now need to pay a wire transfer fee with every payment, which amounts to $50 each time, but other than that, your donated money will be used only for purchasing food, clothing, schooling, and other necessities of living. Nothing is held back or diverted for any other purpose. Thanks!
Posted by Donald Rhody at 6:54 PM