WHY I WENT TO KENYA (conclusion)

You will notice that the title of this final installment of this series of posts is slightly different than the rest. Instead of saying, “Why Am I Going to Kenya,” it says, “Why I Went to Kenya. It in the past tense, because I returned home last night. Vivian drove down to the Central Wisconsin Airport to pick me up.


It was not until I arrived at Chicago that I remembered that this Sunday is Super Bowl Sunday here in the United States. Everyone was talking about it at the airport—either about that or about trying to find a flight home. So many flights had been cancelled in the previous days due to the record cold temperatures that everything was backed up.


I don’t care about the Super Bowl this year. You might accuse me by saying that it is because the Packers are not in it, and that admittedly may be part of it. If they were playing, I would have more interest. But that is not all of it. Even when my state’s home team still had hopes of post-regular season possibilities, my interest in the season had waned down toward zero.


During the past several decades, the sports industry, just like the music industry and the movie/television industry, has been elevated to a level in our society that it does not deserve.
This is made evident by the fact that the most well-know stars of these fields have become the spokes-people of our culture on almost any subject. When an opinion is needed on world affairs, a cultural shift in society, or even about what is right and wrong, it is to the sports stars, the movie stars, and the rock stars that we turn.


Increasingly, I am tiring of all of it. These are not the people that I care to have shape my opinion on anything. All three of the afore-mentioned industries are entertainment industries, and they are little more than that. The place of their professions in society is not to guide us into higher levels of thinking, but simply to provide diversion for us for a few moments—that’s it!

Perhaps it is possible for them to produce shows and music that have somewhat higher values, but while they have excelled at computer driven graphics and recording technology in order to better amuse us, they have remained primitive in  the more redeeming qualities.


In general, these industries that are mainly meant to entertain have outgrown themselves in levels of importance because our society has diminished itself in its ability to think critically. We have come to believe if someone has the ability to give us a few moments of amusement, then they are worthy to lead us in every aspect of life.


Freshly back from my time with the people of the Log Church of Kenya, this contrast of priorities of life hit me hard. These people of Kisii, who despite the fact that they themselves are among the most needy of the earth, have still opened up their lives to provide food, shelter, and a supportive community for the orphans of their area. 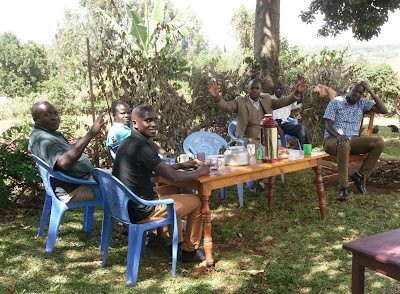 These are the kinds of people whom I would rather shape my world view.


“The Bible instructs us to care for the orphans and the widows,” the three pastors of the church told me in a meeting one day. “We decided to begin with the orphans, because they have the biggest needs in our area.”


I have always gained the most insight into life from the lowly of the earth, and I have worked with many in many different societies. The rich and the famous have had relatively little to offer me on living a life.

Part of this comes from the fact that they usually have too high an opinion of themselves. It is the humble man and the humble woman, the ones who live life where it actually exists, who have the most to teach.


And when history has come to a close, when all the Super Bowl rings have been been burned into ash along with all the Emmys and the Oscars, it is the work accomplished in the orphanage that will remain.


Thanks for coming along with me on this journey. I will continue to write of what is happening with the orphanage—not daily, but more like weekly.
I hope you continue to follow.
Posted by Donald Rhody at 1:59 AM