JUST TO SEE IF I COULD MAKE IT

After my first and almost failed attempt to use the kayak to cross the river, I did not think that I should try again until the water level was a bit lower. Vivian told me that half the population of the world would be thankful if they had instant coffee (which we found in the cabin), and with those words I was shamed into admitting that I had no real reason to again try and cross until the river level went down.


Nevertheless, a couple of days later I thought that maybe I would give it another try, just to see how it would go. This, I decided, was another similarity between being riverbound and being snowbound. I remember being snowbound in our house in Wisconsin and taking the truck out on the road just to see if I could make it, even though I had no real reason for going out.


I thought that I had learned something about kayaks on my first attempt to cross, and wanted to try out a new method that I had formulated. Besides that, the river had gone down a little. I planned on doing it on the day following.

However, that night we had a series of super strong thunderstorms move up the river gorge, causing the river level to rise even higher than before and making the current significantly stronger. Besides that, one very close strike of lightning hit the electric line someplace. As it struck, our lights instantly went out, accompanied by the added dramatic effect of a deafening crash of thunder.


This happened at about 9:00 one night; so when the lights went out, Vivian and I just went to bed. We fully expected to have power again sometime the next day. However, when the following evening began to fall, we still had no lights. We also discovered that the cabin was ill-prepared for a power outage. There were no candles or working lanterns of any kind in the cabin.


It was just after the winter solstice in the southern hemisphere, and at this cabin nestled between the steep ridges of the Waioeka River Gorge, the sun dropped behind the western ridge at about 3:45 PM. By 5:00, it was already quite dark inside the cabin, and with no lights, this made for very long evenings.


As it began to get dark on the first evening after the outage, I hastily tried to fashion some lamps out of cooking oil. Vivian had some cotton thread that would work as wicks, and she also had the good idea of making a wick holder out of some tin foil.


Nick had two types of cooking oil at the cabin. One was canola oil, and the other was olive oil. The olive oil jar said that it was “extra light” olive oil, so I told Vivian that we should use that one since it got pretty dark there at night (it took her a moment to get my little joke).


But darkness descended too quickly that evening, and I did not have enough time to make a very good lamp. It did burn, but despite what the olive oil jar said, the light that came from that first lamp was pretty dim. 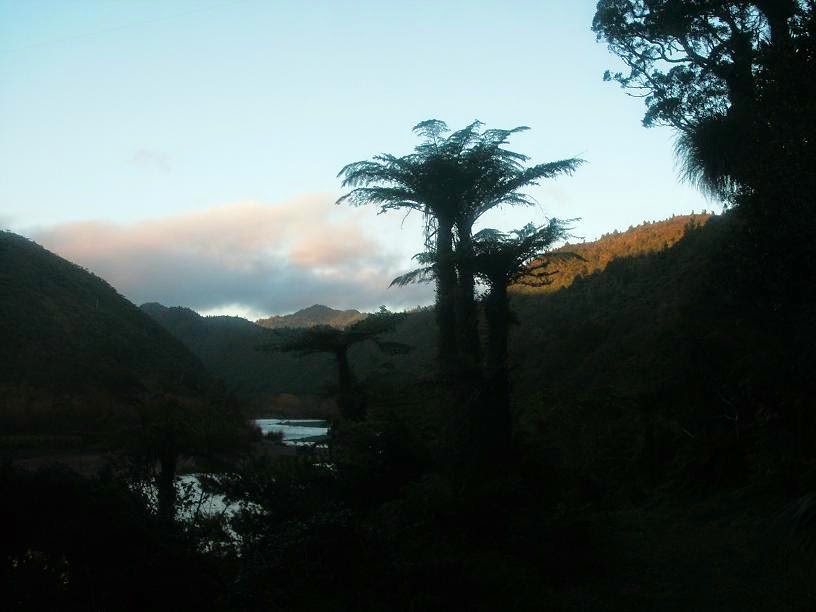 So instead, on that first night I tried to do some writing by the light of the fireplace. We had not actually used the fireplace much before that night. We lit a fire in it the first couple of nights that we were at the cabin, but we suspected that it was one of those fireplaces that draws more heat out of the room and sends it up the chimney than radiates heat into the room. But that night, I again lit it so that we would have the light of the fire to cheer the dark room. I found that if I sat just right, I was even able to write a little by its light.


Of course, we remember the stories of President Abraham Lincoln when he was a boy doing his schoolwork by the light of the fireplace fire, writing with a piece of charcoal and using a shovel blade for a slate. And Lincoln remains one of our most respected Presidents.


LET THERE BE LIGHT

The next night the lights still were not on. When it was beginning to get dark, I again returned to my plan to make a few lamps. This time my design was better. When I placed all of those lamps together on the table, it actually gave me enough light to see the tablet quite well. By the time the third night came with no lights, my lamp making technique was so refined that I may have even been disappointed if the electricity suddenly did come on. 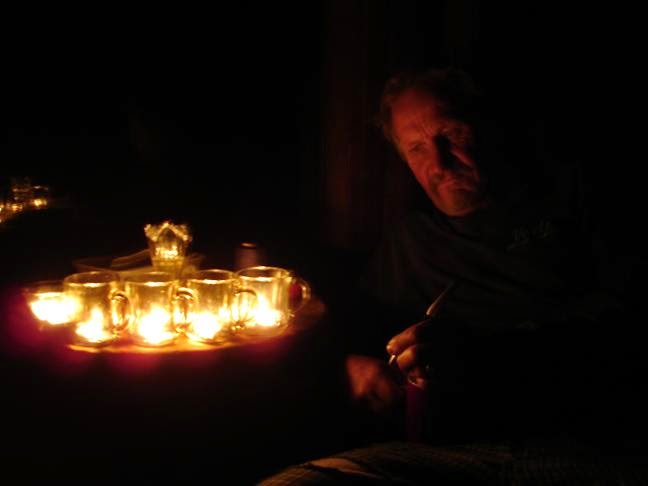 All of this effort that I put into bringing light into a dark room made me think of the words of Isaiah the prophet. Isaiah told the people of his day, “Arise, shine: for your light has come, and the glory of the Lord has risen upon you. For behold, darkness will cover the earth, and deep darkness the people, but the Lord will rise upon you.” (Isaiah 60:1-2).


Of course, the prophet was not talking about olive oil lamps, but the ultimate fulfillment of these words. This can be found in Jesus Christ, who referred to himself as the “light that came into the world.”


It is astounding, however, that as great as that light was (and still is to this day), Jesus also said that many people would avoid the light and instead preferred the darkness. They did this “because their deeds were evil.”

After about five days with no electricity, we decided that the electricity would not be coming on soon. I had hiked into the bush where the power line came in and found an ancient looking transformer a little ways up the ridge that served the cabin. I was pretty sure that the lightning strike we had heard blew it out. Because that transformer and line served our cabin and nothing else, I did not think that anyone from the power company even knew of the outage


But on the brighter side, as we listened to the radio (battery powered) we could hear that the weather forecast for the next several days was that it would be clear and sunny – “fine,” as they say in New Zealand.


Every day, the river level dropped a little and the water flow began to slow. Vivian and I grew quite accustomed to having no electricity. I kept my eye on the river every day and I thought about giving a crossing another try. Finally the day came when I did. I used the kayak, and not the canoe. I wanted to do it in the same kayak just to show it that I could. It went well and without a hitch.


The next day I was able to convince Vivian that we both could now cross using the canoe. Given my first experience at crossing in the kayak, she was at first quite nervous about going into the river, but the water level now had dropped considerably and she was convinced it would not be so bad.


We tried it once, and it again went fine. After that, we again could cross the river quite easily so that we could get out of camp to go into town if we needed to or wanted to. Funny thing though; we just stayed at the camp.


BACK TO THE PRESENT

﻿ One afternoon, as Vivian and I sat outside enjoying the air and sky, and the trees and the breeze, we heard a commotion on the opposite riverbank. We went down to the river to look. It was Nick. He returned and had brought with him motor boat, and not just an ordinary motor boat. It was one of those jet ski type powered boats that have a jet water pump instead of a propeller, allowing it to go even in rather shallow water.


He also had with him a repairman from the electric company. I notified Nick about the outage when I was finally able to get to town, so on his way to the camp, he picked up the repairman.


In all honesty, I was a bit ambivalent about the fact that we now had electricity again. The camp needed it; I knew that. And we also enjoyed the convenience of lights and other things. But to tell the truth, I had also grown to enjoy the inconvenience of not having it.


And the new jet ski boat? It would make living at the camp much easier and probably safer. I do not know how these boats are in handling fast currents, but it seemed to do quite well in the river as it was at the time when Nick came with it.


The boat would mean less isolation for the camp – easier to come and go. But like the return of the electricity, I was of two minds about this. I guess it must indicate something about me when I say that I enjoyed the isolation of the days when Vivian and I were alone at the camp, cut off from the rest of the world. 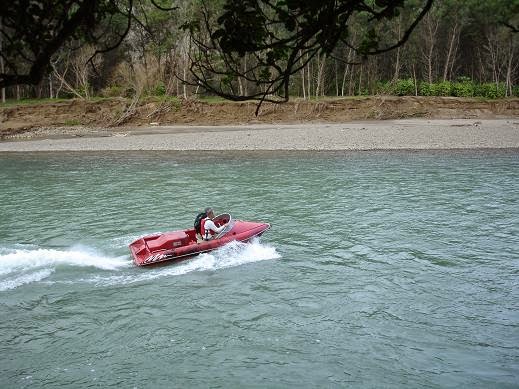 But no matter, we were leaving the next day. In the morning we crossed the river to get to our car. I put no thought at all into how we would make the crossing, no strategy to try out.


Nick brought us over in the jet boat.