As I stood on the bank looking at the river, I tried to work out in my mind a strategy for getting across in the kayak. I actually had first considered the canoe. Nick does it. Nick was the director of this small camp and usually lived there, even when there were no campers. He told me that he sits in the middle of the canoe instead of the rear when he is alone, since it gives him better control. I wondered if he would try it with the water at this level or if he would let the river go down.


I remembered many years ago when I lived in India, the people of Kashmir had canoe-like vessels that they used on the lake in Srinagar. They paddled them by squatting down right in the bow with the canoe behind them. To me this made some sense on calmer water, but I did not see how it could work here.


No, I thought…the canoe, would be too massive for me to handle. I had better use the kayak. I hesitated with this decision. In the past, the kayak had not been that faithful of a friend to me.


I still do not know the proper way to cross a fast-flowing river in the kayak. I now only know of one improper way. Or, perhaps it is the proper way but I just did it in an improper manner. My strategy was to point the kayak at an angle upriver and try to keep it at that angle as I paddled across. I of course realized that the current would carry me downriver, but that at least I would come to the opposite bank.


One of the problems was that I did not have a large target area. On the opposite bank, there was only a short distance where one could easily land a canoe or a kayak. After that small area of riverbank, the shore becomes steep and brushy, making landing difficult. And then the river begins a sharp bend, with the bank opposite the cabin being the main channel where the water is rushing around on the outside of the turn in the river. On this bend, the outside bank consists largely of rocks, which the water was striking very hard and even throwing spray up into the air as it rushed in waves around them.


Well, I thought… there was nothing to do but give it a try. I could not find the kayak paddle at the camp, only the canoe paddle. (Vivian later showed me where there were several kayak paddles. I should have asked her first). But I just figured that I would do it with a canoe paddle. After all, I thought, only one end can go it the water at a time anyway. 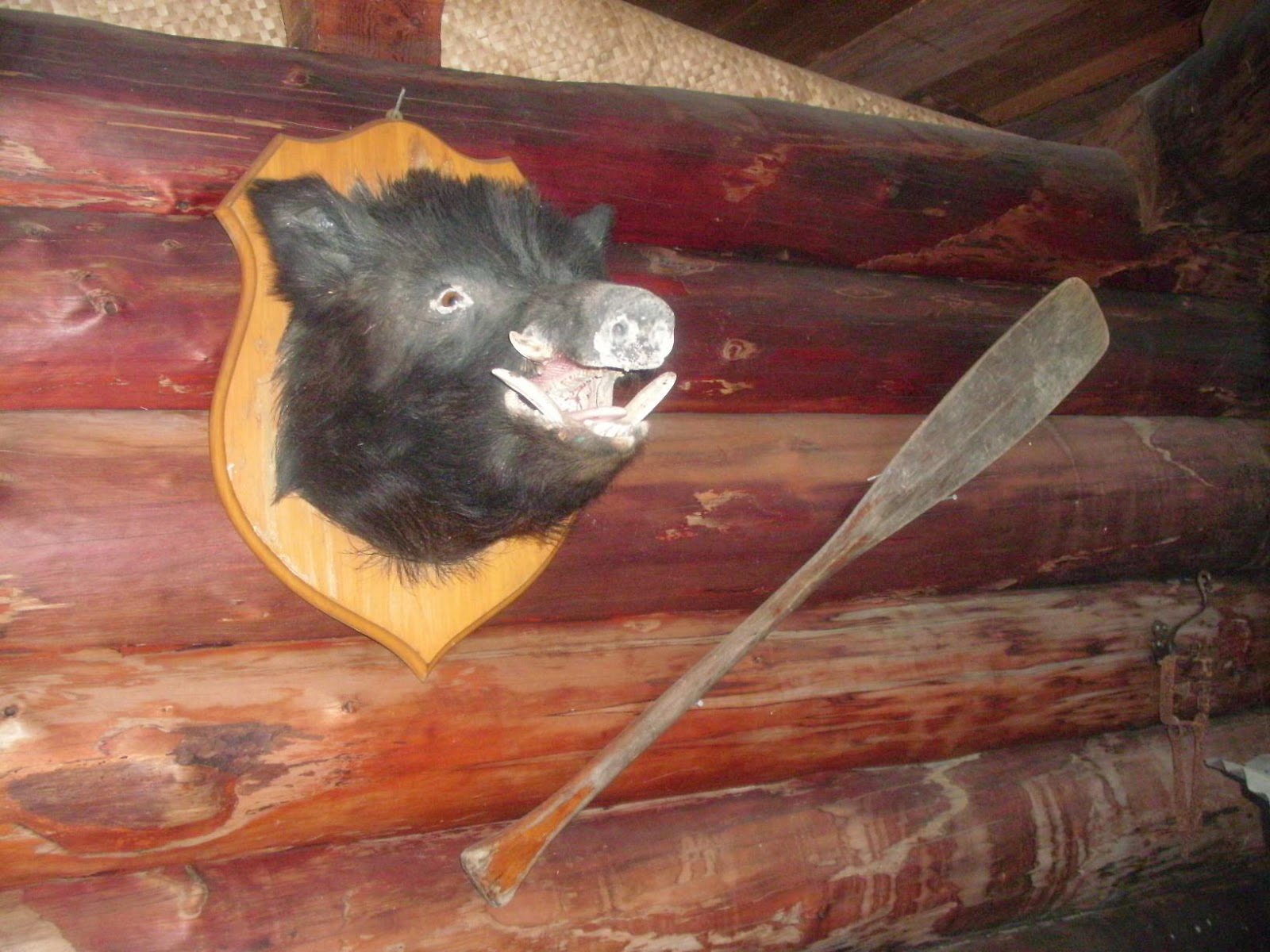 I had a plastic garbage bag (clean) with some dry clothes that I assumed that I would probably need when I reached the other bank. This bag I tied around my waist so I would not lose it in case I would capsize. After a short word to God for help in this venture, I got into the kayak.

The kayak, I decided, was not designed by a 60-year old person, but considering what it took me to get comfortably seated; I calculated that it was probably designed by about a 20-year old. Once settled in, I was ready to try out my aforementioned strategy for crossing the river.


True to my plan, I angled the kayak at about a 45° upriver and started paddling like mad. However, I soon saw the error in my calculation of how the kayak would respond to the current. There was no possible way that I was able to maintain this angle against the current. The force of the river immediately pushed the point of my kayak around and sent me heading quickly downriver. Sometimes the kayak was flowing frontward and sometimes backwards, depending upon the will of the river at the moment.


I kept paddling, now thinking that it would be handy to have a paddle blade on the other end of the paddle as well, since when the kayak was turning, I could not get the canoe paddle to the other side fast enough to help me control it. But control was just a dream anyway; at this point I was simply trying to stay upright.


Paddling like a madman, I did manage to get quite near the opposite bank, although I was now far downriver from the “ideal landing spot.” What was more, the current right at the bank was the strongest, so that when I got too near the bank, the flow would push me back out into the river, keeping me from actually getting to land.


Now brush was sticking out into the river, slapping at my face as I rushed past. I tried to grab onto it with my one free hand, but I was travelling too fast and could not hold on.

Then I saw it: a log that was lying just below the surface of the river, sticking out from the bank. Water was shooting up at the point where it hit it. The kayak struck the log hard and sent me tumbling into the water, which in the winter season when we were there, was quite cold.


The paddle went flying. I saw it in the water for an instant and grabbed for it, but at that point my head went completely under as I was being tossed around by the current. With one hand, I held tightly onto the kayak. I did not want to loose that as well. I think that without my hand on the kayak while I was under the water, I may not have known which way was up.


As I surfaced I saw that I was still near the bank, but I could not get over to grab something. I looked ahead and saw that I was rapidly approaching the rocks. I knew I could never survive if I hit those rocks.


Right then and there, I decided to follow the example of the Apostle Peter. When he found himself drowning in the sea, he cried out, “Lord Jesus, help me!”


This is what I did. “Lord Jesus, help me!” This now had become my new strategy for crossing the river.


I have heard sermons in the past that have criticized Peter for his lack of faith in the situation that he was in at the time. I may have even mentioned myself it in some of my sermons. After all, Jesus did say to him, “O you of little faith, why did you doubt” (Matthew ). But I think that after this experience of mine, I will be a little more judicious with my words about Peter.


In Peter’s case, after he had cried out for help from the Lord, Jesus reached down his hand and lifted him up, out of the waves. In my case, the hand that came down was in the form of a very small eddy along the bank that had been created by the way the brush was breaking the current at that place.


I suddenly found myself in this eddy and out of the main flow of the river. I am not at all sure how I got in there, since I did not even see it until I was in it. One of my hands still hanging on to the rope of the kayak, with the other hand I grabbed some of the brush that was there and pulled myself up on the bank, dragging the kayak with me. My dry clothes (I hoped that they were still dry) were still in the bag tied to my waist. The canoe paddle was long gone. I would not see that again.

I will not bore you with all of the other particulars of the trip. In town I looked for a new canoe paddle. One store had only kayak paddles, which I was going to buy until he told me the price was almost $100. I could not get myself to pay that much when I knew that one of my sons just bought a kayak itself in the U.S. for just about $300.


But another store had a canoe paddle for about $25, which was more to my liking. Going across the river in the other direction would not be so difficult. I had worked it out how I would do it and because I would be landing on the inside of the bend, the water on that side would not be flowing so rapidly. There was also a long and large bank on the cabin side where I could easily land the kayak.


I told the guy in the store about my experience and he must have somehow gotten the idea that I was telling him a funny story, since he laughed the whole time as I was describing my strategy for crossing, the brush hitting my face, and the kayak tipping over sending me into the river. He especially laughed when I told him that I reckoned that my canoe paddle was now somewhere out in the .

I will forgive him for this one day soon. I suppose in a similar situation and if I were the store clerk behind my dry little counter selling canoe paddles, I may also have seen a little humor in this story.


The return trip across the river went much better. I carried the kayak along the bank far up river before I put in. Also, since the rapid current was close to the bank where I put in, I could paddle through it and make it to the less rapid water near the other bank.


All things considered, I was thankful to be back at the cabin.


Oh, there is one more thing: I forgot to buy the coffee.