A MOST UNUSUAL RIVER
A river flowed out of Eden to water the garden, and there it divided and became four rivers (Genesis 2:10).

In our reading of Genesis and of the account of the Garden of Eden, we learn about a river with some characteristics that are very unusual. In fact, there is no river today on the earth with such characteristics. This river of Eden, which originated within the garden, then flowed out of the garden and later divided to create four separate river systems.
This simply does not happen. In our experience, we see rivers that have their headwaters usually in the higher altitudes, and then begin their long journey to the ocean. On the way across the continents, they are joined by other rivers that have begun in other regions. These rivers all merge to become one larger river. They are later joined by yet others, until they all become one very large river. The Mississippi is a good example of this, as are large river systems in every continent.
On rare occasions, there are rivers that will divide and become two rivers. This is called bifurcation (two forks). The largest river on the planet where this occurs is on the Orinoco in Venezuela. The Orinoco is a huge river. It is so large that the fresh waters flowing out of the river into the Atlantic reduces the salinity of the water far out into the ocean. The outflow of the river is so great, that on his third journey, Christopher Columbus knew that he must be sailing toward a very large continent with a large river system instead of another of the small Caribbean islands.
Deep in the jungles of southern Venezuela, where the Orinoco originates, there is one spot where the river divides. One fork remains the River Orinoco, and the other river becomes the Rio Negro. The Rio Negro, in turn, joins in the normal fashion with the great Amazon River. Thus, in this case, one river divides to become part of two separate large river systems.
When we lived in Venezuela, and when I was on a flight to Brazil, I once had the opportunity to fly over this region and believe that I saw this bifurcation of the Orinoco. I saw the point where the Rio Negro joined the Amazon.
But this phenomenon is extremely rare. What is more, in the case of the river of Eden, the river divided and became not two, but four rivers. Two of these rivers can still be identified as the Tigris and the Euphrates. The other two rivers, the Pishon and the Gihon are unknown to us today.

All of this is interesting to me, but of even more interest is the life giving nature of the River of Eden. The river seems to have had its source in the garden itself. It supplied water for the garden before flowing out of it and becoming the four separate rivers.
In our experience, rivers do not originate in this way. Large rivers require large watersheds. They begin small with many tributaries, and grow in volume when the tributaries join together.
The River of Eden rose within the garden itself. How it did this, we do not know. However, before God had prepared the garden, we are told that there was a mist that emerged from the land to water the face of the ground (Genesis 2:6). This is perhaps an indication that there was a large water source beneath the surface of the ground that bubbled out in an artesian springlike way and gave rise to the river of Eden. The river watered many the many trees of the garden. Among them was the Tree of Life. 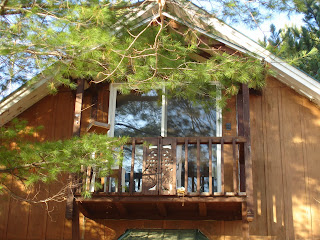 We cannot be certain how this all was, but it makes me think of another river that we learn about in the Scriptures. Indeed, it is one of my favorite passages and one that I read every so often. I have even carved a stylized wooden motif of it that forms a part of the railing of my balcony upstairs in our house. The Scripture is found at the opposite end of the Bible from where we read of the river of Eden:

Then he showed me a river of the water of life, clear as crystal and coming from the throne of God and of the Lamb The river was flowing down the middle of the great street. And on either side of the river was the tree of life, bearing twelve kinds of fruit and yielding its fruit every month. And the leaves of the tree were for the healing of the nations. (Revelation 22:1-2)

Here again is a very unusual river. It appears in the new kingdom, when God will bring all things to completion and again to perfection. Like the River of Eden, this new River of Life does not have a large watershed to collect its waters. Rather, it rises from the very throne of God to water the trees along its bank.
And what is the tree? It is the very Tree of Life that was once found in the Garden of Eden. Pure life and perfection will be restored!

Oh to drink from the crystal flow that comes from God’s own throne.
Along its banks, a tree will grow – the tree of life in my new home.
Oh, to lie in the shade of this tree; the nations, by its leaves will be healed.  (Revelation 22:1-2)
And its fruit will be life-giving to me, and to all that the Spirit has sealed.  (Ephesians 1:13)

(Excerpt from a poem I wrote years ago entitled, Foreign Shores – a poem for the road weary worker)