On the sixth day of creation, God created man and woman. The account of this is found in one of the first verses of the Bible. “And God created man in His own image, in the image of God He created him; male and female He created them” (Genesis 1:27).
Of course there is no way that we are able to comprehend the depths of meaning of this verse. We cannot know all of the implications of the meaning of what it is to be created in the image of God. Any explanation that we can give of this phrase falls far short of an accurate portrayal of what God actually did. Besides this, we cannot do justice in describing the love and the dedication that God put into his creation of man. 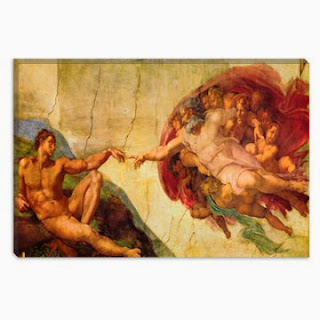 Since there no possible way in which we are able to envision how the actual creation of the man and the woman occurred, we often put no thought at all into it. We fail to contemplate the astoundingly great marvel of this event.
However, it is good to put a few moments into attempting to understand God’s creative act. What was the way in which God created the first man and woman? How was it that the first humans came to be? Did they just pop into existence, like a genie out of a bottle?
Even though the description of creation given to us in Genesis is of necessity a brief one, the writer in some small ways tries to communicate some of the wonder of the event. After the summary of what happened in the six days of creation in chapter one of Genesis, he then focuses in on what happened in the sixth of these days. He expands a little on the creation of man and woman.
In the first chapter of Genesis, the writer of the book said that the man and the woman were created. Bible students know that the Hebrew word used here is bara’, which is usually (but not always) translated in the Bible as create.
When God created the universe, I believe that he did so using no pre-existing material. He did not take some matter that was already in some state of existence and use it to make the galaxies, the stars and the planets. These things God simply spoke into existence by the power of his word. “He spoke, and it was done; He commanded, and it stood fast” (Psalm 33:9). This was creation by the power of God’s word alone, ex nihilo, as it is some times said (out of nothing).
In our verse of Genesis 1:27, when we first read of the creation of the man and the woman, this word bara’ is also used. However, when the author of Genesis tells us about it in the second chapter, he does not use this word. Here is what he writes:

Then the Lord God formed man of dust from the ground, and breathed into his nostrils the breath of life; and man became a living being. (Genesis 2:7 NAS)

Here the word create is not used, but we read that God formed man. For those of you who are interested to know, the Hebrew word here is yatsar, and it is here that we begin to get a glimpse of the devotion that God poured into our creation.
This word is used numerous times in the Bible. Often it is used to describe God’s involvement with his people even while they were still in the wombs of their mothers. As Isaiah the prophet wrote, “Thus says the Lord, your Redeemer, who formed you from the womb, ‘I, the am the Lord, who made all things, who alone stretched out the heavens, who spread out the earth by myself’” (Isaiah 44:24 ESV).
In fact, Isaiah realized that God had called him to be his prophet before he was even born. He said that the Lord “Formed me from the womb to be his servant… for I am honored in the eyes of the Lord, and my God has become my strength” (Isaiah 49:5 ESV).
The prophet Jeremiah realized the same thing: “The word of the Lord came to me saying, ‘Before I formed you in the womb I knew you, and before you were born I consecrated you; I have appointed you a prophet to the nations’” (Jeremiah 1:4-5 NAS).
As we saw in our verse in Genesis, God did not create man ex nihilo, but instead used some material that God had already created. He used the dust of the ground. God formed man from the soil. This fact gave rise to a biblical metaphor which may even be a bit more than a figure of speech. These same two prophets especially drew on this thought.
Isaiah writes, “But now, O Lord, You are our Father, we are the clay, and You our potter; and all of us are the work of Your hand” (Isaiah 64:8 NAS).
God sent Jeremiah to go to a potter’s house so that he 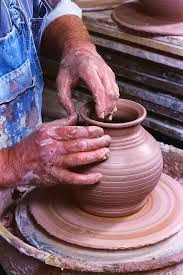 could better learn from this example. Jeremiah watched the potter working on his potter’s wheel, slowly shaping the clay. As the potter worked, the form of the pot gradually began to emerge.

However, the potter was not satisfied with how the pot turned out. Perhaps something happened to the freshly made pot to make it unusable. Since the clay was still pliable, the potter reworked the pot, again shaping and forming the clay in his hands. He did this until he was happy with the result and the clay pot was exactly how he intended it to be.
The lesson for Jeremiah was that God is still at work with his people. God continues to shape and to form us. The forming for some of us may take considerable reworking, for we do things that make us unsatisfactory in some way. But God is patient. As long as we, the clay, are still pliable, God will continue to work with us.
That God created us is marvelous enough, But to me, the thought that he formed us is even more splendid. He continues to mold us into His image.
Posted by Donald Rhody at 7:55 PM