LANDING ON THE MOON AND THE EXISTENCE OF GOD 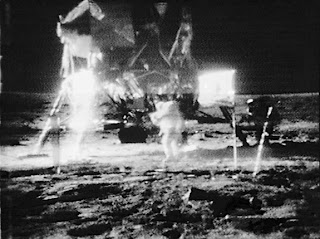 On a July day in the year 1969 (for those of us who are old enough to remember), all of us in the United States listened with great anticipation to what was about to happen. Some days before that day, a Saturn V rocket had taken off from Kennedy Space Center, and now, much to our amazement, the lunar module had actually landed on the moon and the first man was about to set foot on the lunar surface. As we sat and watched TV and as events unfolded, we saw the grainy video and we heard the crackling voice of Neil Armstrong saying, “That is one small step for man, one giant leap for mankind.” The mission of Apollo 11 had landed on the moon. It was the very first time man had visited another celestial body.

Do you believe that this really happened?

It was during the fourth lunar landing that I found myself sitting in a tea stall in a village high in the Himalaya Mountains. Across the table from me sat an old man from those mountains. As we talked, the crew from Apollo 15 was on the surface of the moon, not only walking around, but they even had a little car up there that they were driving around.
The old man had heard about this and asked me if I thought that it were true. It was evident to me that he did not. Frankly, I must say, that at that moment and in those primitive circumstances where the most advanced piece of technology was the tea strainer, I also found it a little difficult to believe (see the post from Feb, 2012).
There are, of course, people who do not believe that the United States ever landed on the moon and will vehemently put forth arguments that we did not. All of the video, all of the effects, they will say, took place on some Hollywood movie lot, and it was all contrived to convince the world of the superiority of the United States over the Soviet Union, with which we were in a “space race.”
Do you believe we ever landed on the moon? If you do, how would you prove it to someone who is an unbeliever? Any evidence that you could logically show him, he would simply deny or call into suspect its viability. Is there a way to physically prove it to him?
Ideally, one could say that if we could take the skeptic up to the moon and show him the hardware that was left behind, the American flag planted there and the footprints of the astronaut, these things could be presented as proof that was without denial.
However, there is a difficulty here. This is something that took place outside our field of experience. One could even say that it took place in another realm of existence about which we have no way of knowing or perceiving with our senses. Despite all of the evidences that we really did send men to the moon and despite how strongly you may believe all of these pieces of evidence to be true, there is no way to empirically prove this to a skeptic.

We come upon much the same problem when talking about the existence of God. There are a host of evidences that we see all around us, but if we think that we would be able to put together a list of empirical proofs that could convince any skeptic, we will fall short of our goal. Indeed, I question whether this should not even be our goal. We should never expect that any relationship that we, as mortal man, could have with the eternal Creator of the universe could be based upon God proving to us that He exists, as if He were the lesser man trying to convince a greater man to be his friend.
God tells us about Himself. We can read about His personality and His creativity. We can grow to understand that He desires for us to have a relationship with Him, but He also gives us the freedom to reject Him. It is amazing that, in the pride and the arrogance of man, most actually do reject Him. I will never understand how men can do this.

We have begun a Bible study at our church where we are going through all the basic teachings of the Scripture, and we have started with how we can know that God exists. In this short post, I will not try to reproduce everything that we spoke about in the study, including evidences in nature, evidences in logic, and even evidences within our own beings and personalities.

The only point I will leave you with is what has become perhaps my favorite Biblical passage concerning creation and the existence of God. The ancient man Job was a wise man. In the following quote from him, there is simplicity and, if you care to look, also astonishing depth: