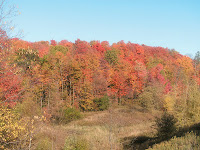 The autumn leaves were in full color and the day was perfect for hiking, so what else to do but put on a pack and head outdoors? Actually, it turned into more than just a short stroll through the woods, since I decided that I should hike one of our local trails, through maple covered hills and past small lakes formed by the glacier of the last ice age, until I arrived at Wisconsin’s highest point – Timm’s Hill. In all, it would be about a nine mile hike. 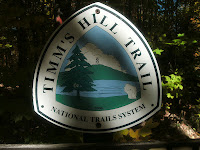 On another hilltop near Timm’s Hill a local man has constructed a prayer chapel, which he leaves open for visitors who are looking for a quiet place for prayer and meditation. It was for those reasons that I also went there, as well as a bit of studying a portion of the Bible that I have been reading lately. 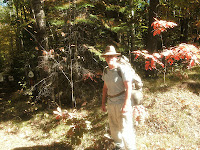 I then went off into a spot in the woods where I settled down to spend the night on a bright, moonlit night. The golden leaves of the trees seemed to become even more gold in the moonlight. The hike ended up being a pilgrimage of sorts. I am thankful to have had the opportunity and that the Lord has allowed us to live in such a peaceful place.
On the way to the top of the hill I stopped at my uncle and aunt's coffee shop for a piece of pie (raspberry cream cheese - two thumbs up). The coffee shop is part of a resort that they run, which is on one of the small lakes in at the foot of Timm's Hill.
There are two of these lakes, Bass Lake, which is in front of my uncle's resort, and Timm's Lake. On the photo of Bass Lake, you can see the tower on the top of the hill. This is TImm's Hill, Wisconsin's highest point (alt 1951 ft). Not that impressive you say? That's good, we are not trying to impress anyone, but just calmly enjoy the quiet beauty. 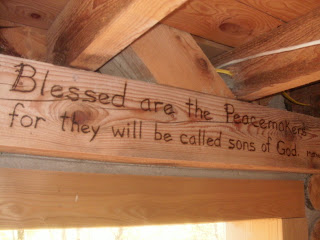 "Your going to the woods camping alone?"
He looked at me with astonishment.
In fact, if I could discern the tone,
It was meant as an admonishment.

"Do you not think it a little strange,
Your only companions trees and stones?
I'm quite certain that you could arrange
To bring someone, so you're not alone."

I replied to this bit of advice,
But knew he would not understand.
"A companion is usually nice,
But on this trip something else in planned."

"You may not agree with my choices.
If you must, just consider me odd.
But at times I want to hear no voices,
Except to hear the clear voice of God. 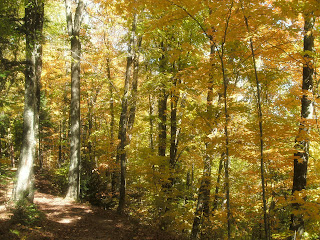