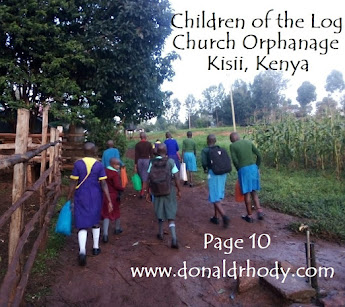 Today is not only primary election day in Wisconsin, but it is also the national election in Kenya for president. It is said to be a very close race between the two leading candidates.

If you have been reading about the children of the orphanage, you have seen that many of them were orphaned from post-election violence in the past. Please pray that this present-day election will be peaceful, and that whatever party takes control of the politics of the country, they will be able to move Kenya forward.

Please also continue to pray for the orphanage. They are going through a difficult time right now.

Deborah Nyanchera – 13 year-old girl who came to the orphanage in 2018 as result of post-election violence.

The family of Deborah owned a plot in a place called Kondere here in Nyanza. This family was misplaced during the political violence that happened in some parts of the country after the serious violence that engulfed the country in 2007. These clashes claimed more than 477 lives among which the parents of Deborah were involved!! Another 118,000 people were misplaced whereby Deborah was among them!

Deborah and other 21 refugees were brought by a lorry and they were dropped at Ogembo sub-county. People of good will volunteered to take these refugees to their various homes at least to provide them shelter and food as they regain and adjust themselves to begin a new life. Everyone who volunteered took one or two refugees according to his/her capability.

A business woman known as Zenah Kerubo took this young girl Deborah and adopted her. Deborah received good care from Zenah for 5 years until the time Zenah died in October 2017!! After the death of Zenah the life of Deborah started facing a lot of challenges. The four children of Zenah could unite against Deborah!! They were now denying her food at times, and most of the days they could beat her without cause!! She became patient with the challenges until mid-January 2018 when she totally faced rejection from Zenah’s children.

She boldly and personally came to the orphanage seeking for care and help. Tears was running down her cheeks as she was introducing herself to us!! We were touched by her situation and gave her access to the orphanage. She is good in athletics and singing and also she is one of the best soloists among the orphanage praise and worship team.

Deborah is thankful to God for the support and encouragement she receives from pastor Donald, her dear wife Vivian and the Log church USA. She is equally appreciating Pastor Joel and the leadership of log church Kenya for their love and good care towards all the orphanage children.

Constantine Mosomi – 17 year-old boy who came to orphanage in 2018, orphaned and rejected by family

This man Enock rejected the mother of Constantine and due this, the Mother of this boy went away to unknow place leaving her son Constantine in the hands of his father Enock. She went away in the year 2011 and her whereabouts are still unknown! Constantine enjoyed living in harmony with his father and step mother until May of 2017. That is when Enock died on the spot after falling down from a two story building where he was doing Masonry work.

Five months after the burial of Constantine’s father, Susan the step mother of Constantine, secretly sold the whole plot plus the buildings that Enock had bought. This was the place where they knew as home. This step mother disappeared with her two children to unknown place.

At the time, Constantine was staying at a boarding school in Nyabioto. When the term was over, he came home and was terribly surprised that their home and premises was of a different person who bought it from her step mother Susan. Constantine was denied access to this home and could not locate his step mother. She still cannot be located!

This is how Constantine suffered rejection until two four months later, when we meet him January 2018 in dilemma, wandering in Sengera village without hope. We brought him under the orphanage care. He is a simple and very polite boy. He is a good footballer and he likes teaching other kids the word of God. He has a passion of becoming a preacher.

Constantine is giving God all the glory for the wonderful connection with Donald and the log church USA. Thanks very much for the support of Log church. Blessings.