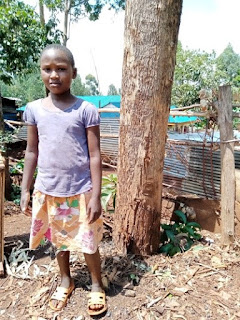 Faith was displaced during the post-election violence that took place in January 2018 at Kericho tea estate, where only her single parent was attacked and she was killed before the eyes of faith, a young girl!!

One of our young believer Caleb was by then working in the farm at Kericho tea estate. He managed to escape the brutal killings narrowly, also carrying the child Faith in his arms until he found the bus to Kisii some 200 meters to the border. Caleb was just but a neighbor to Faith! He is not married and upon reaching at his home Sengera location with the kid; Caleb’s father could not accept faith to stay in his family and the father is a drunkard, he also smokes marijuana!!

The father of Caleb is troublesome and sometimes he could beat Caleb’s mother and lock her outside the gate. Due to this, our believer Caleb brought the kid to us and requested us to adopt her in the orphanage. Brother Caleb has tried to inquire about Faith’s family background but it’s not yet known.

Faith is glad and comfortable to be under the good care in the orphanage and he is very much thankful to pastor Donald and the church of Kenya for the provision to her. She likes dancing and she wants to become a teacher after her school. 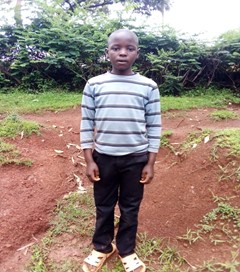 Justus was raised up by his aunt known as Banchiri. This boy did not see his mother but he was told that his mother died two months after giving birth to him and she was buried in the plot that Justus’s father had bought in Kisumu where both Justus and his mother were living together with Justus’ aunt by the name Banchiri.

Justus’ aunt took care of Justus from two months up to 9 years when post-election violence happened in 2018 and the perpetrators attacked their compound and managed to slaughter Banchiri,{ Justus’ aunt}. They spared this boy Justus and a certain vehicle was rescuing the Kisii People from the land of their political opponent, where someone who was escaping to Kisii took Justus and put him in the vehicle.

When the vehicle came to a place called Kenyenya the man left this boy at the market and told the boy to ask anyone for assistance and the man went away! This young boy was directed to our orphanage and he located us by himself. All of sudden he marched into the orphanage compound and explained to us about the story and how he arrived at Kenyenya.

We reported the case to our local area chief and the chief requested us to allow this boy to stay in the orphanage. Justus has stayed in the orphanage for two years now and he is humbled to be natured and taken care of by the support of Church and friends in the USA and the Log Churches of Kenya. This boy loves drawing and he desires to be a graphic designer after school. 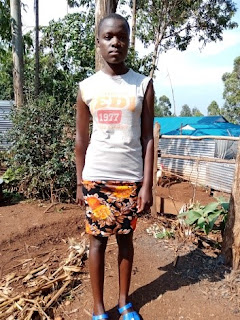 Mirriam was raised by a single mother known as Joyce Kerubo. Unfortunately her mother died of blood cancer and was buried in the government land at Eskimu grounds where her mother’s family stayed too and they had grabbed this government land where they termed as their original home for many years.

Joyce‘s parents died back in the year 2002 and 2003 respectively. Now Joyce was only remaining with his brother Tom Kebati who had a family and they both stayed in this piece of land. But years later Joyce, the mother of Mirriam, suffered of blood cancer and died in the year 2014.

Mirriam was left in the caring hands of his Uncle Tom Kebati until the year 2018 when post-election violence struck in Eskimu and there arose tribal clashes and Tom was killed and his wife too!!

Mirriam and the two children of the Uncle escaped the death and crossed the border to Kisii for safety. The government got angry and all the tribes who were staying at Eskimu government land were evicted. The two children of Mirriam’s uncle went their way and left Mirriam desperate in the villages!!

We found Mirriam helpless in the year 2019 and we were concerned to give her shelter, food and clothing. Hence we took Mirriam from wondering in the villages and brought her to the orphanage.

Mirriam is appreciating Pastor Donald and friends for their generous and continuous support. Mirriam is one of the praise and worship soloist in church and she likes singing to the lord and she also want to reach the unsaved through singing and save them to the kingdom of God.

*********************
If you would like to help the children of the Log Church Orphanage of Kisii, Kenya, you may make your check out to “The Log Church” and write “Orphans” on the memo line.
Send it to:
The Log Church
PO Box 68
Tripoli Wisconsin 54564
We now need to pay a wire transfer fee with every payment, which amounts to $50 each time, but other than that, your donated money will be used only for purchasing food, clothing, schooling, and other necessities of living. Nothing is held back or diverted for any other purpose. Thanks!
Posted by Donald Rhody at 2:25 PM