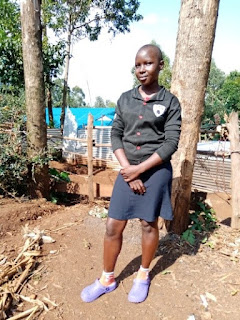 Yvonne was raised by a single mother known as Lillian Bosibori, Yvonne’s mother lived in place called Kiango. The mother Lillian had come to Kiango when she was 19 years old. She was homeless and she initially worked with a private sector known as clay works in  Nairobi, but after she was replaced she came  to this border and she started a business  of selling clothes.

Lillian later gave birth to Yvonne at the age of 21 while still living in this place alongside the Kisii and Maasai community border; she was living in a rental house with her daughter Yvonne.

It is sad news that during post-election violence that took place in the year  2017-2018, Yvonne‘s dear mother was killed by the Maasai solders while on her way from the market together will other 3 Kisii women!!. They were slaughtered mercilessly to death!!! The solders escaped after committing the killings!

The corpse of the deceased was buried in the cemetery. Yvonne‘s mother died at the age of 34 years while her daughter Yvonne was at the age of 13 years then. One of the Masaai woman adopted Yvonne to her home and Yvonne stayed there for only 1 year and in January the year 2019 this good Samaritan passed away after suffering from high blood pressure!! She left Yvonne and her two elderly daughters who were not married that they stayed with in their home.

Terribly the daughters of this woman immediately chased away Yvonne from their home after burial of their mother. We found Yvonne desperate and homeless January 2019. We sympathized with her situation and decided to bring her to the orphanage.

Yvonne is greatly happy to be in the orphanage premises. She was hopeless but she has hope now in this facility. Yvonne is much thankful for the church and friends of USA being led by Pastor Donald and Vivian to support and encourage the orphans where she is included. Yvonne likes teaching young kids during Sunday school lessons and she has a passion to become a teacher of the word of God. 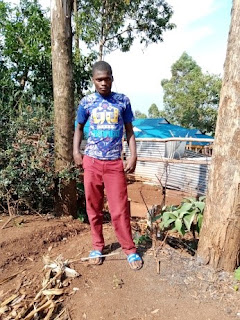 YEAR HE CAME TO THE ORPHANAGE 2019

Daniel Nyangieya lived together with his parents at Nyabioto shopping center near our location Sengera. His parents James and Mary are said to have come to this village shopping center from Nyansara where they lived for eight years. The family background of Daniel‘s parents was not known at all since their dwelling was based in rental houses.

Daniel used to sleep in a separate house from the family rental house. In fact this boy received all meals and necessities in the house of the parents but in the evening after supper, he went to sleep in his neighbor’s house. He could wake up earlier in the morning and walk to the house of his parents to get breakfast and other daily needs. The parents were supporting their son Daniel but the only challenge was a sleeping room. Hence he found somewhere to sleep in a friend’s house.

It was Sunday morning on date 27th the year 2019 when his parents were attacked at around 11pm at night and they were shot dead!! Some neighbors came to rescue them when they heard a sound of gun from their living house but they found dead bodies and the criminals who did this killings had ran away!! Their bodies were buried in the cemetery and the government officials vowed to do investigation of the matter for Justice but they have not come up with the information of this killing to date!!

Now everyone feared to live with this young boy Daniel Nyangieya since they did not know what caused the gun shoot to both his parents!! On 31st January (after four days) we meet with Daniel being psychologically tortured and terribly crying for the rejection he had gone through!! He explained to us how he lost his caring parents.

We also found the same information from people of Nyabioto village and we managed to allow this boy join the orphanage at least to give him hope and courage. Daniel Nyangieya is humbled to be taken care of through the support of Pastor Donald and USA church. He is equally thankful to pastor Joel and the church of Kenya for showing him love and care. He is a talented young footballer and he also likes dancing in church. Besides these talents he wants to become a pastor after school. 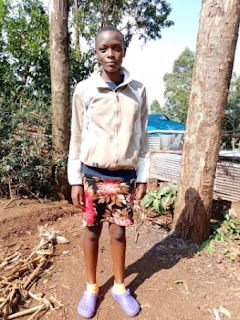 The name of Shadolin’s mother was known as Sheilla Kemunto. Sheilla was one of the casual workers at Ogembo tea factory. She got an access to live in the factory premises with her daughter and later with a man who was believed to be her husband for several years.

In the year 2017 February the mother of Shadolin collapsed and died while on duty!! After post mortem the doctors discovered that it was a disease known as fatal arrhythmias!!! it is during this time  that the “so called “ husband to Sheilla denied their marriage and said that Sheilla was just but a girlfriend and they were  not legally married with her!

People suggested that maybe this man denied this intentionally in order to prevent the body of his wife from being buried in his home.  And also they sensed that he wanted to reject Shadolin as her daughter: This is because this man was publicly announcing that, he found Sheilla with a kid (Shadolin) and they started living together as friends and not as married couples!!

By the fact that the deceased was homeless the body was buried in the cemetery and this young girl Shadolin was left hanging around without any consideration to her from anyone!! Pastor Vincent and our church elders were among the guests who attended the funeral and after they witnessed a total rejection to Shadolin by her “so called father” and none was volunteering to adopt Shaldolin and it was evening time they brought this girl to the orphanage and explained the situation.

We sat down as leaders the following morning and eventually accepted Shadolin to be part of the orphanage kids. Shadolin was helpless but now she is receiving good care in the orphanage through the coordination of Pastor Donald and Pastor Joel. She is talented in singing and composing new songs. She has a passion to become an artist after school.

*********************
If you would like to help the children of the Log Church Orphanage of Kisii, Kenya, you may make your check out to “The Log Church” and write “Orphans” on the memo line.
Send it to:
The Log Church
PO Box 68
Tripoli Wisconsin 54564
We now need to pay a wire transfer fee with every payment, which amounts to $50 each time, but other than that, your donated money will be used only for purchasing food, clothing, schooling, and other necessities of living. Nothing is held back or diverted for any other purpose. Thanks!
Posted by Donald Rhody at 8:30 PM