MORE ORPHANS - SOME YOUNG, SOME OLDER 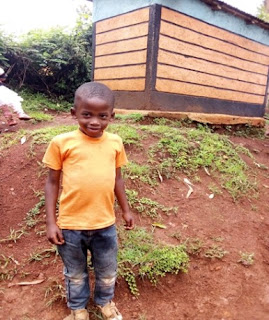 In the year 2017 March she disappeared and the efforts of tracing her was in vain!! She woke up earlier this day as if she was going to her normal job in the restaurant but she did not report to work and she did not return home to date!! Matwa was left helpless in the rental house and later he was rescued by his close neighbor known as Elijah Momanyi.

This man Elijah was a watchman at Gucha Mart supermarket in Ogembo town and his family was staying upcountry. Given that he was staying alone in the rental house because of the job, he decided to take Matwa to his house in order to support him with at least food and care.

Elijah stayed well with this kid Matwa but unfortunately he never went to visit his family back at home like before because he feared leaving Matwa alone in the house. Hence from March to December he failed to visit the family but he was just sending support to them. His wife Jack was upset and she came to Nyakorokoro where the husband was staying and she forced her husband to leave the work and vacate the rental house immediately!!

Jack did not want to allow this kid Matwa to go with them and they left him in dilemma and we met with her sad situation when we were coming from the funeral and we were moved to adopt him and nature him in the orphanage. Matwa is excited to receive care and support here in the orphanage.  He likes clay modeling and also singing. He wants to make clay   items after school and support the gospel. 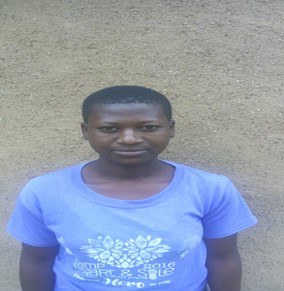 HOW WE FOUND HER: IN THE STREET DURING EVANGELISM

Sharon had a single parent. She stayed with her mother who was a single parent in Kibera slums at Nairobi. Her mother was homeless and when she died in the year 2018 August she was buried in the cemetery. Sharon was adopted by a person who volunteered to take care of her. This person was known as Mary Mbera.

Mary also had 2 sons and 3 daughters who she stayed with here in Kibera Slams, Now Sharon became part of this family. Sharon enjoyed staying with the family of Mary but the forth month became so complicated!! The family of Mary being accompanied by Sharon also started a journey to attend Christmas festive season back at the village.  Sharon did not know the location of Mary’s village home but she was equally happy to know the place and also to belong in that family.

It was heart breaking to Sharon to be left in Nyamache bus stop when they arrived here in Kisii!!! Mary asked Sharon to come down from the bus and she gave Sharon Ksh 1000 whereby she instructed Sharon to buy some loafs of bread but first she stay with the money until she receives a confirmation from Mary through the phone  directing how many loafs of bread  she would  buy . Mary lied to Sharon that motorbike of her brother was to pick this girl Sharon at Nyamache bus stop and take her home with the breads!!

Sharon stayed in this bus stop waiting for the call from Mary but this woman never called!! When it was heading to late evening Sharon used a stranger’s phone to call Mary but the call was not reachable. She tried calling several times but it was off. Sharon stayed in the booking office of the bus six days expecting to reach Mary through the phone but things were not   working!! The phone of Marry went off permanently!!

Sharon used the Ksh 1000 to buy food and after six days of staying outside in a hostile environment the money was over and she started wandering in the streets!! This is where we meet her on date 9 January 2019 and opted to rescue her after being touched with her sad experience right from Nairobi to Kisii without her knowledge that it was an evil scheme to her!! We had done with evangelism and now we came with Sharon in the orphanage.

She is humbled and extremely thankful to receive support in the orphanage through Pastor Donald and the church of Kenya. She likes singing and she has a passion to safe many souls through her talent. 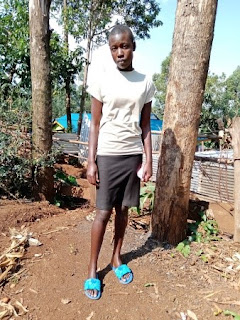 Annastanciah got misplaced during the 2017-2018 post-election violence. The town they lived was attacked by peace perpetrators who were burning houses of other ethnic tribes, destroying properties and also killing other tribes who were not Kipsigis!!! It was a terrible night to the residents of Bomet who were not of the Kipsigis community!

This is where the family of Annastanciah came outside of their house and all of sudden they were terrified by a great sound of gun shooting and screaming!! They dispersed everyone running for his/her safety! Annastanciah managed to escape the ethnic conflicts and crossed the border to kisii border  at Borabu sub-county.

Right there at the border she met with a Kisii woman known as Divinah Moraa who helped to pay fare for Annastanciah to Sengera bus stop. Annastanciah opted to travel to Sengera because she once heard her mother say that she has a close relative at Sengera market.

Upon her arrival at Sengera she was not recognized by anyone as a relative but one of our church believers took her to his home until earlier January the year 2019 when the believer was overwhelmed by his family needs and he was jobless, so he requested us to adopt Annastanciah to the orphanage premises!! We gave her permission to join other kids in the orphanage.

Annastanciah  is now staying in the orphanage and she is extremely joyful to receive support and help from Pastor Donald, Vivian, the friends and the church of USA and partially from the church of Kenya. She likes songs and she has a passion of becoming an artist after school.

*********************
If you would like to help the children of the Log Church Orphanage of Kisii, Kenya, you may make your check out to “The Log Church” and write “Orphans” on the memo line.
Send it to:
The Log Church
PO Box 68
Tripoli Wisconsin 54564
We now need to pay a wire transfer fee with every payment, which amounts to $50 each time, but other than that, your donated money will be used only for purchasing food, clothing, schooling, and other necessities of living. Nothing is held back or diverted for any other purpose. Thanks!
Posted by Donald Rhody at 9:34 PM