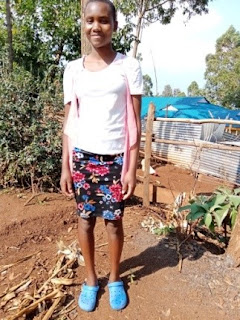 Violet ‘s mother was a Congolese (citizen of Congo), her name was  Naom, she escaped violence in the Democratic republic of Congo and they were brought as refuges to our country Kenya with her daughter Violet at the age of 4 years. Naom started a new life in Ogembo town and she was employed by someone  in a cyber café where  she earned her living  to feed and educate her daughter Violet.

It was the year 2017 December when Naom the Mother of Violet went missing! She went out for job but never returned to the rental house where they lived. Violet stayed alone in that rental house for three months until the end of February without her mother coming back and the rent was accumulated that the landlord wanted Violet to vacate the room. In that room Violet was being supplied food by good Samaritans but rent became a great problem.

Violet was desperate now and by the fact of being homeless went to the street to hustle but she could try to attend  school although her attendance was not prompt since school fees was a challenge!! When we were moving around in house to house evangelism we got her story and everyone was moved to hear that Violet wants to attend school despite her challenge with street life!!

After prayer I was encouraged by the Holy Spirit to adopt Violet into the orphanage. We took her to school and she is a bright girl in Std 8 now. She speaks our language Ekegusii very fluently and she is delighted to live with other kids in the orphanage. Violet is thankful to Pastor Donald for love and support. She sings very well in junior choir and she wants to be a gospel artist after school. 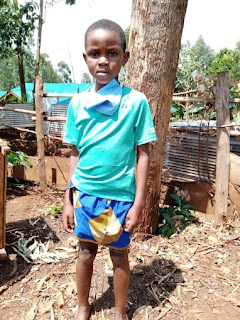 FOUND: IN THE STREET  DURING  EVANGELISM

Before Vivian was born, her mother lived at Itumbe town and she was a street vendor, she lived in Itembe town for 16 years and her family was not known by her neighbors. She was not married but  she conceived  through a boyfriend and bore Vivian her only child in the year 2012 at Getembe hospital.

In the year 2016 she unfortunately died at a fatal road accident that happened in Nyansongo when a bus they were boarding collided head on collision with a truck, leaving 7 people dead among Vivian’s mother !! Her body was burried in the cemetery and on the very burial day Vivian Felt seriously  sick and was rushed to Gucha level 6 hospital by an ambulance.

The same  day we were  also  doing evangelism  in the hospital premises, praying for the sick. Immediately on their arrival we prayed with Vivian before she was attended by the doctors since the patients were more than doctors!! Surprisingly enough God made an instant miracle and she recovered in an amazing way!!

The ambulance driver told us the story of Vivian, how she felt sick with shocking news of her mother’s death and he told us that Vivian had nowhere to go since her mother was  dead and her family background was not kown. Then he asked one of us to kindly adopt Vivian so that we will continue to pray for her and give her comfort as servants of God so that she can have courage.

The driver was not aware that  besides preaching and praying for the sick in the hospital we also have passion of kids ministry. After purchasing Vivian some medicine and pain killers ,we aske the ambulance driver to take us our  home with Vivian.  Vivian joined the orphanage by the grace of God. Vivian was miraculously healed and  from that day she has never been sick Vivian  is grateful to have received miracle healing and she is happy to be in a great company of other kids.

Vivian likes dancing in church. She has hopes of becoming a dancer that can give God glory in service. 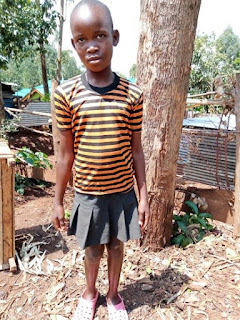 FOUND: FROM STREET DURING EVANGLISM

Kwamboka ‘s mother was homeless and she was raised by a friend who took her to school until form 2 when she received earlier pregnancy and dropped out of school giving birth to  Kwamboka. This caused her to be chased out of this home and she got married and stayed In a rental house until she gave birth to Kwamboka.

Her Marital life lasted for 5 years and later her husband disappeared, leaving her with this kid Kwamboka. The mother of Kwamboka struggled with hard life of being jobless for 3 years until one morning when she threw Kwamboka in Nyamasege street after selling house properties and went to unknown place.

Kwamboka joined other street children and continued to stay with them having  some hopes of feeding from  left overs and begging food from strangers until when this kid Kwambvoka saw us from a distance as we were carrying our  bibles to evangelism at Riteke Village. Leaving other street children behind, she ran to us and requested for prayers.

Her prayer Item was to get saved and God to touch her mother that she could come for her in the street. Information from close neighbors was that Kwamboka’s mother had said several times that because of hardship of life  she will poison her daughter Kwamboka and disappear so that she can be flexible and at least be free from struggles of taking care of Kwamboka. For a long time she said this until one morning when she managed to throw her in this street!!

We prayed for this kid and one of our orphanage kid who accompanied us by the name of Harite felt love for Kwamba. This kid Harite (scroll down a couple of posts to see her story) cried when we wanted to leave Kwamboka after praying for her!!! And Kwamboka also was following us behind not ready to leave us!! Our orphanage kid Harite was crying while begging us to adopt Kwamboka to the Orphanage.

We were eventually overwhelmed  with sympathy and allowed Kwamboka to go with us and after evangelism it was evening time and we brought her in the orphanage facility. Kwamboka was helpless in the street but now she has somewhere to belong. She is very thankful to Harite who caused us to give her access to the orphanage and she is also thankful for the support and love in the orphanage.

She likes drawing and she has a passion of becoming a nurse. In church she is one of the best kids who recite memory verses.

*********************
If you would like to help the children of the Log Church Orphanage of Kisii, Kenya, you may make your check out to “The Log Church” and write “Orphans” on the memo line.
Send it to:
The Log Church
PO Box 68
Tripoli Wisconsin 54564
We now need to pay a wire transfer fee with every payment, which amounts to $50 each time, but other than that, your donated money will be used only for purchasing food, clothing, schooling, and other necessities of living. Nothing is held back or diverted for any other purpose. Thanks!
Posted by Donald Rhody at 8:01 PM