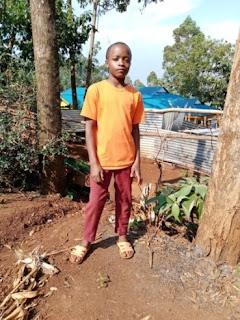 FOUND IN THE STREET DURING EVANGELISM

His parents lived with him in Eldoret town at the rental houses and unfortunately they died from HIV/AIDS After the dead of both parents the landlord decided to adopt this boy, he stayed with the boy for 1 year and later chased him away, one of the caretakers also adopted him to his family but the caretaker died 2 year later after which this boy joined street children and when we had an evangelism we met him being hopeless and helpless we were moved to take him under our care.

Vincent is appreciating God for this orphanage, he always says, “really God is the father to the  fatherless, he gives home to the homeless” he says that he doesn’t even remember the dead of his parents compared to what God has done in his life, he likes singing and he has a passion to train more choirs that will give God glory through singing. He is courageous to stand alone at his age and bless the church with at least a song  in every service we meet to worship God!!. 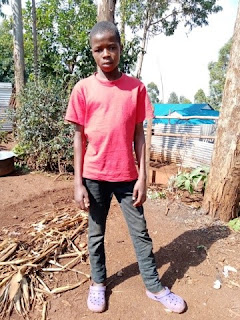 AGE: 12 GENDER: MALE
PRIMARY GRADE 7
FOUND: IN THE STREET DURING EVANGELISM
YEAR HE CAME TO THE ORPHANAGE: 2018

During evangelism this child followed us and being a total orphan he lived with his aunt when the aunt heard that the child was with us in the gospel he came and took him beating and dragging him all the way back home.

We later realized that his aunt was a devil worshipper and from that day this aunt started mistreating this child, because she did not want to hear about Jesus and he wanted to distract this kid Kijana from the faith!!

In the year 2018 we found this child coming to the orphanage by himself seeking for help. We adopted him but 1 year later his aunt died. The family background of this child is not known by anyone.

This boy Clinton always walks with small bible and sometimes he gathers kids of his age in the orphanage compound trying to act as pastor preaching and laying hands on these children saying that ‘ I am a pastor Joel’ Really wonderful! This boy gives thanks to God whenever we ask him to say something concerning his new life in the orphanage.

He gives thanks for shelter, food , clothing and education. The boy says that after school he will go to live with Pastor Donald and preach to the white people who have touched his life through sending donations. We always feel happy and encourage him to work hard in school so that he can know how to preach English at that time if God will confirm his dream. Amazing!!!

We now need to pay a wire transfer fee with every payment, which amounts to $50 each time, but other than that, your donated money will be used only for purchasing food, clothing, schooling, and other necessities of living. Nothing is held back or diverted for any other purpose. Thanks!
Posted by Donald Rhody at 7:22 PM