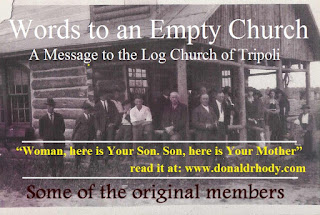 this day a typical Good Friday.

Typically on Good Friday, we as Christians enter into a type of mourning, at least there is a sense in which we do this. In any case it is what I do, and this is the message I usually try to bring in my Good Friday messages.


It is true that we now know the full story. We know that Jesus not only died to secure our redemption, but also that on the third day after his death, he came back to life. He demonstrated his power over death. It is a power that is also promised to all who believe in his ability to give this life.
“O death, where is thy sting? O grave, where is thy victory?”
Nevertheless, even if we today know the full story, it is good to enter into some measure of mourning on this day. It is good to realize the immense burden laid upon Jesus on that crucifixion day, lest we lose the sense of the incalculable price that was paid for our redemption.
Typically, my Good Friday thoughts center on these things. But as I said, this is not a typical Good Friday. Today, I want to focus on an aspect of that crucifixion day that is usually overlooked on other Good Fridays.
***********************
As Jesus hung on the cross on that day that he was crucified, he had been severely beaten. His back had been lacerated by a brutal whipping. The slashes in his flesh that were now rubbing against the rough wood of the cross with even the slightest of his movements.
He was suspended from that cross by three massive spikes, one through each hand and one through his two feet that had been placed together, one over the top of the other.
It was an extremely painful death, but I have heard that the cause of his death was not actually as a result of his wounds, as severe as they were. It was not the loss of blood, and it was not succumbing to the pain. The actual and final physical reason for the death of Jesus was exhaustion asphyxia—he couldn’t breathe!
Because of the manner in which Jesus had been mutilated and maimed, and because of the manner in which he was suspended with arms outstretched on the cross, Jesus could not get enough oxygen into his lungs to sustain his life.
At the very end, the gospel writer Mark tells us that Jesus “Let out a loud cry and breathed his last.”
**************************
It has taken me a little while to get here, but I now want to relate this to our present coronavirus Good Friday.
If you have been watching any of the accounts of the coronavirus sufferers on the evening news, you have heard that the primary complaint is that the lungs of those stricken with the virus have filled with fluid. They cannot breathe!
That is why there is the desperate need for respirators. That is why the doctors are performing record numbers of intubations. These are done to provide oxygen to the patient.
But even that is not the main point that I want to make in relating the death of Jesus on the cross with our present coronavirus situation. The main theme that I want to bring out involves some words spoken by Jesus in his last minutes.
As Jesus was hanging on the cross and as he looked down upon those standing around him, he saw not only those who were mocking him and those who had spat upon him. He not only saw those soldiers who were busy gambling for his cloak, having already divided up the other four pieces of his garments—his only earthly possessions.
As Jesus looked down through bloodied eyes, he also saw his mother Mary. Standing by her he saw the disciple who, in some special manner, had become to him like a brother.
Seeing these two people who had become so close to him, he first said to his mother, “Woman, here is your son.”

Then he said to the disciple, “Here is your mother.”

We are told that from that moment on, the two became as mother and son.

Jesus, as he hung in great pain and unable even to breathe, looked to those whom he had come to love. In that familial connection he had with them, he demonstrated his great compassion for their present sufferings and needs, and sought to fill the emptiness that they were experiencing.

Though his hands were nailed so that he could not move, he nevertheless reached out to them in love.

This is the message of this unique Good Friday. There are many who are suffering on this very day. It is not only those patients, who themselves have the virus and are struggling to breathe and who find themselves in a fight even for their own lives, but it is also those who are caring for them.

It is the doctors and the nurses and other health care workers. These dedicated laborers are not only suffering from being overtaxed in energy and emotion, but suffering also from lack of medical equipment and supplies. They are also suffering because they know that with every person that they treat, they are also putting themselves in great danger.

And it is not only in the hospitals where there are people living with a great degree of fear. It is also those people whom before perhaps felt that they had gone unnoticed. They are the delivery drivers, the store clerks, the garbage collectors, and many others who before were always a part of our daily lives, but who now have also become all of our critical care-givers.

In a sense, we all need one another. We realize this today perhaps better than we ever have before.

When it comes down to what we cherish, it must be our connection with one another. We may not be able to shake hands, give a hug or kiss of greeting, or even stand within arm’s reach of one another, but we can love one another. We can reach out in love.