Never have I been involved with a work that has been so challenging, and yet at the same time so rewarding. On the rewarding side, to know that we have been involved with a work that has literally saved the lives of these children has been very gratifying and deeply satisfying. If no one had intervened in their lives, many would by now probably have been dead, and the rest living on the streets scrounging in garbage heaps. 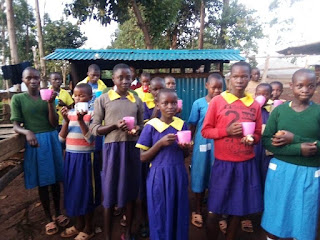 One day in Kisii town, when I was walking in the market, I walked past two huge garbage dumpsters. As I was passing, two boys emerged from them, probably about 12 years old or so. They had an appearance like death itself— two starved and emaciat-ed children wearing filthy rags to cover what they could of their muck-caked bodies.

Of course this was horrible to see and my empathies went out to these boys, but I could not also help thinking that this would have also been the fate of our own children who would have managed to still stay alive even if we hadn’t begun the orphanage.

Another aspect of this work that has been very rewarding is that the kids are truly thankful for what has been done for them. Before they were rescued, they were aware of their fate, at least the older ones who had an understanding of life. They knew there were no prospects for them to improve their lot, and no one who cared.

Because of where they had come from, they now joyfully praise God for having rescued them. They are alive and are being raised in an atmosphere of Christian love and nourishment.

These have been my rewards, and if you have been involved with this work, they are also yours.

The challenging side of this work is that the needs never end. We are accustomed in America to give a donation to some work and then congratulating ourselves for “doing our bit.” But of course this approach does not work in running an orphanage. You cannot feed a child one day and expect that he will not need to eat again.
﻿

Food costs are now about $1400 to as much as nearly $2000 per week (depending upon the highly fluctuating food prices - you can pray that the prices for food will eventually return to their normal "cheap" prices where we were only paying about $1000/month).

In addition school fees for the kids cost more than $1000 per month. Besides this, some items that I thought were covered, such as clothes and shoes, have worn out.

Even the mattresses are wearing out! These are not Temperpedic mattresses, you understand, but just thin pads of foam. 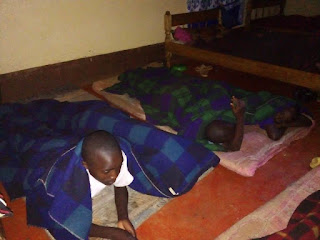 I also just learned that some kids are still sleeping on the floor, which may be why the mattresses are wearing out so quickly. I had previously thought that we had sufficient bunk beds, but we apparently do not. They still need two more beds, but the people of the Log Church of Kenya have dedicated themselves to contribute for this need until there is enough.
And of course food is a constant challenge. The amount of money that I send from our own funds and from those of you who donate do not nearly meet the needs. It is not uncommon for the orphans to go four or five days eating nothing but one meal a day of thin soup made of ground maize.

So these are some of the rewards and challenges to this work. Am I﻿﻿ glad that I became involved? Of course I am, but it really was not a matter of choosing. God would not let me rest until I did something about these children.

Send it to:The Log Church
PO Box 68
Tripoli, Wisconsin 54564
Every nickel given in this way will be used for only aid for the orphans. It will be used for purchasing food, clothing, schooling, and other necessities of living. Nothing is held back or diverted for any other purpose