WHY I AM INVOLVED

Like it or not, to most of the people in the world, if you are an American, you have money—a lot of money. At least this has been my experience with people in most of the countries where I have worked. I suppose this is not true in some of the wealthier countries of Europe, Asia and elsewhere, but since the greatest portion by far of my work has been in financially strapped places, this is the perception of Americans that I have usually encountered.


In some sense this is of course true. Financially speaking, I believe that Vivian and I live below the poverty line here in the US, but we are still far, far wealthier than most of the people in the world.


Being a rich American is a disadvantage while working in a poor country, especially if one works in the church. It is a barrier to true fellowship and partnership—and that is not the worst of it. It is a barrier for the people in their trust and faith in God.


After living for several years in one South American country, I felt I had finally reached a place in my relationships where people actually wanted to befriend me simply because I was me, and not because I was an American. But that did not mean that their perception of the US changed.


Once in a meeting, where we were discussing a looming financial crisis, one board member of the church made this statement: “Perhaps there is some way we can get some money from the north” (meaning the US).


I would not have responded the way that I did if I had been new in the country, but since at that point I felt that I was more a citizen of that country than I was of the US, my comment on this statement was, “Sometimes it seems to me that we look to the north first, and to the Lord second. Brothers, it should not be this way.”


Since returning to the US, I cannot tell you how many requests that I have received from past acquaintances to sponsor them so that they can immigrate to America, or how many requests to help with hospital bills, school bills, past-due rent, etc, etc. You may think all of this would have calloused me long ago.


Nevertheless, here I am quite deeply involved with a church and orphanage in Kenya, East Africa—a continent where I had never before worked and where I had no plans to visit.

Why am I doing this? What’s different?


It is a long story and if you go way, way back in these blog posts (I think to about October or November of last year), you can read the history behind it. You can also read how I resisted becoming involved for a good long time.


In part, the reason that I am involved and the difference is this: In the very beginning, the relationship between Pastor Joel and I began by him writing to me about my sermons from the Log Church (which I place on my blog page) and responding to some of the things that I said. He also began to send to me some of the things that he shared with the people of the church where he was the pastor. Our relationship was built on sharing our thoughts on the Word of God.


He said nothing of the needs of the orphans. Indeed, I did not even know of the orphanage that they had until after we had been corresponding for a good long time. I will not say that Joel never had any thought of me helping them financially, but it was only after I began to gradually learn of some of the things that they were trying to do there, and then it was with great humility and deference.


That is part of the reason that I am involved in Kenya. The other part and the greater part is this: God has told me that I am to do this.


He has also told me that this is His work and not mine. It is not my responsibility to make appeals for funding, but only to tell the story of the orphanage in Kisii Kenya. God told me that He (God) will move hearts for people to contribute—not me. You will get no guilt trip from me. No passionate appeals.


But I will say this, If God does so move you to contribute, 100% of the money that you give goes to the orphanage and the needs of the orphans. There is of course no “administration fee,” no office overhead, and I foot the bill for the transfer of the funds. This is also where Vivian and I are now sending most of our own “sacred money” (tithes).


So I will continue to tell the story of the Log Church and Orphanage of Kenya (as they have come to be called). I will try to do it in a matter-of-fact manner, but you will have to forgive me if I get a little passionate from time to time, since I am actually very passionate about the work. But you can also be assured that the passion is not meant to invoke you to give.
If that comes, it is God speaking—not me. 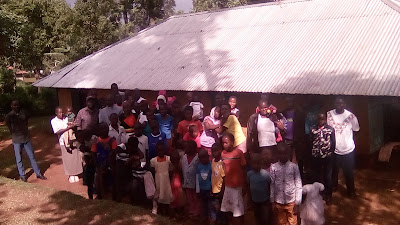