Perhaps the best known of the churches of Lalibela is the church of St. George. This church is the best preserved, most likely owing much to the fact that it is the most recent of the churches to be sculpted. In some ways, it was surprising to me that a church was constructed in Africa that commemorates St. George. 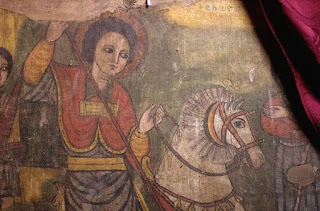 Like many historical figures, St. George is not only a person of history, but also of many legends. As an historical figure, it seems that George was born in Lydda of Cappadocia (now central Turkey) to Christian parents. His father was named Gerontius, a name I kind of like because it means “old man” (I suspect that we get our word Geriatrics from this word). This Gerontius, the father of George, was a well-known soldier in the Roman army. However, despite his name, Gerontius died when George was only fourteen years old.


As in many military families, the son followed his father in this career. Gerontius had been one of the finest soldiers in the Roman guard. Thus, when George enlisted, the Roman emperor at the time, a man by the name of Diocletian, was happy to have George also join his forces.


However, after some time, things changed in the Roman Empire. Some time after George became part of the Imperial Guard, the emperor Diocletian suddenly became opposed to Christians and ordered that all the soldiers should offer up sacrifices to the Roman gods.


George, not only a Christian by name but especially by conviction, refused to do so. What was more, his refusal was not done in secret, but in front of the other soldiers and even in an audience with the king himself, before whom George strongly held to his conviction as a believer in Christ. Diocletian did not want to lose George as a soldier, and tried to convince him to renounce his faith by offering him many gifts of land and money and slaves if George would make a sacrifice to the gods of Rome.


After repeated refusals, the king then subjected George to many torture sessions, three times from which he had to be resuscitated only to endure more torture. Before his death, George had distributed his wealth to the poor. His end came with a public decapitation on April 23 of the year 303. Among the witnesses to his death was a pagan priest and a Roman empress, who thereafter also became Christians.


His body was returned to his birth place of Lydda. Almost immediately Christians from the area visited his tomb, recognizing him as martyr for the faith.


That is the story of St. George, at least the part that is at least
somewhat substantiated by history, but George’s story goes far beyond this. For instance, you have no doubt heard of how St. George slayed a dragon. This event is said to have taken place in a now unknown location, but one which had a small lake, in which the dragon lived. The dragon carried a plague that was ravaging the countryside, so in order to keep the dragon appeased, the townspeople would feed it two sheep every day.


Eventually however, the town ran out of sheep. After that time, so the story goes, each day one of the children of the town was given to the dragon for his food, each child chosen randomly by lot from among the village children.


This was the case until the lot fell on the daughter of the king. The grief-stricken king offered the people of the town all of his wealth and half of his kingdom if his daughter could be spared, but the people would not have it. They demanded the king to feel the pain that many of them had already felt.


Reluctantly, the king complied with the decision of the people. His had his daughter dressed up as a bride, since she would never see her wedding day, and brought to the lake to be fed to the dragon.


However, as chance would have it, George happened upon the situation. As he was speaking to the girl, asking her why she was dressed the way that she was, the dragon emerged from the lake. George, instead of fleeing the dragon as the girl had told him to do, instead made the sign of the cross in the air and charged the dragon, seriously wounding it with his lance. After some additional dramatic details in the story, George then struck the final and fatal blow to the dragon.


So that then, is the legendary part of the story of St. George, at least the shortened account of it. It may seem incredible, but it is accepted widely enough that the image of St. George on horseback slaying a dragon is seen on many coats of arms, and the sign of his cross found on several flags of nations and cities. During the Second World War, Winston Churchill named his own personal aircraft after the name of St. George’s lance, Ascalon. I am told that there are several sculptures of Saint George battling the dragon in Stockholm, the earliest of these inside Storkyrkan (The Great Church). 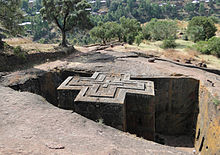 And, as we see now, the image of St. George battling the dragon is also found in the town of Lalibela, Ethiopia. Not only is
the image of George on several wall hangings in some of the churches, but the cross of St. George elaborates many of the window openings. But King Lalibela did not stop there paying honor to the saint of old. The entire structure of the Church of Saint George is made in the shape of what we know to be his cross, patterned after the sign the saint made in the air before charging the dragon, while mounted on his steed and brandishing his lance Ascalon.


There are those of us who may question what we might see as the sometimes excessive veneration of past saints, but we should not be so harsh in our condemnation. After all, the eleventh chapter of the book of Hebrews also brings many of these saints of yester-year to our attention, calling them “A great cloud of witnesses that surround us.”


In our culture, wearing the football jersey to honor our favorite player, or a tee-shirt emblazoned with our favorite rock band seems always to be acceptable – even to church. Instead of this, why do we not honor some of these men and women of the past who teach us that true virtue is not that you can throw football, or hash out some mean chords on a guitar, but true virtue can be found in doing good, in helping people, and in staying strong in our Christian convictions in the face of great persecution?


Don’t know where to start?