It was not until fairly recent decades that there has been a road to the town of Lalibela that has been better than barely passable. Before just several years ago, there were no vehicles in Lalibela, no petrol stations, and little to offer in regard to services for travelers. Lately however, much work is being done on the road. I believe much of this is owing to the fact that the church site of Lalibela was named a historic site by the UNESCO World Heritage Centre in 1978. Even with this, when Levi and I traveled to that town by backcountry bus, much of the road was still under construction.
It was largely a long and dusty ride of about seven hours from Dessie, with one stop to pee on the side of the road if you needed to, and one more stop later for lunch, or perhaps to look for a more discreet place to pee if you were too embarrassed the first time (if you had managed to hold it for the additional three hours). The entire way we crammed ourselves into school-bus type seats with our luggage on our laps.
As on my other bus rides in Ethiopia, the green plastic store bags were occasionally passed back to car-sick passengers in the bus, soon to be filled and then thrown out of the window. Thankfully after that first experience on the bus up from Addis Ababa, I had no further need for a bag to be passed to me. Seemingly I had made my adjustment to the bus rides over the mountains and around the sharp turns of the roads of Ethiopia (see part 7).

At the bus station in Lalibela, the manager there was somewhat surprised to see us. “Most foreign tourists come here on the airplane,” he told me.
I suppose that is true, but I was also told by someone that some Ethiopian pilgrims come even on foot to Lalibela as part of their pilgrimage.


******************
The eleven rock churches of Lalibela in Ethiopia remained largely unknown to the world for many years. I call them rock churches instead of churches made of stone, because they are not stone churches in the traditional sense. These are not the work of stone masons who began the structures by laying a foundation of stone footings, and then building upon the footing with succeeding courses of stone. This is the way in which we usually think of stone churches.

The churches of Lalibela however, are monolithic in structure. That is to say, they are chiseled and carved from one solid piece of rock. This is not done from the bottom up, but rather from the top down. Most of the structure of the churches was made by first chiseling straight down into the rock of the mountain, or perhaps into a side, leaving only the rock that was to remain as part of the structure. Any material that was chiseled away and not wanted had to be carried away. Only the rock of the building itself remained.
Thus, these churches were not of stones that were cut from the mountain of their origin, made into blocks, and then constructed into a building at another site. The churches of Lalibela were made from stone that was undisturbed from its origins. In this way, it is said that the churches are made from “living stone.” 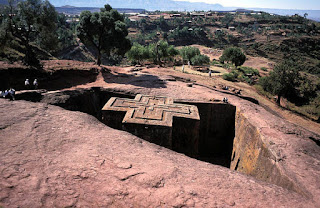 The clearest example of all that was involved can be best seen in the Church of St George. Here, a nearly forty-foot deep cavity was chiseled straight down into the rock of the mountain, leaving only the middle intact. Until the cavity had been completed to its full depth, there was no entrance into the excavation except from the top. That means that all of the rubble from the removed debris had to be carried up and out the top. It was only when the cavity was dug to what would be the floor, forty feet down, that a cave-like entrance was added. 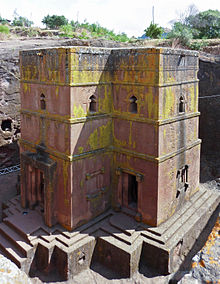 Then slowly and painstakingly, the inner church began to take form. The churches of Lalibela are not crude hollows cut out of rock, but are ornately designed, complete with door and inner supporting arches, elaborate windows and door frames, and interior and exterior columns. The builders very obviously exceeded far what was merely necessary to make their churches. This was a labor of love, and labor that held deep spiritual meaning for the people of that time.
However, despite the fact that these were magnificent structures that held deep meanings for their builders, and despite the fact that Ethiopia also had large communities of Christians in the early centuries, 12th century Ethiopia was not medieval Europe, and for hundreds of years the churches of Lalibela remained unknown to the outside world. It was not until the 1520’s that the Portuguese began to explore the area and came across the city.
In the first of these expeditions to this region, the priest Francisco Alvarez who accompanied the group wrote of these magnificent buildings, describing them in some detail until finally concluding with these words:
“I am weary of writing more about these buildings, because it seems to me that I shall not be believed if I write more…but I swear by God, in Whose power I am, what I have written is true.”
After visiting these churches, I will say the same. In an earlier post about Levi’s village I mentioned that there are some experiences that cannot be described with even a thousand words, and if a picture is truly worth a thousand words, then even a thousand pictures are not adequate. What I will tell you about the churches of Lalibela can never be adequate to describe them. The best that I can hope to do is to give you some sense of what it was like for me to see them.