THE WIDOW OF ZERAPHATH - Part 2

(Please scroll down to read part 1 before reading this post)


THE WIDOW OF ZERAPHATH - PART 2


But Elijah instead said this: “Do not fear; go, do as you have said, but make me a little bread cake from it first, and bring it out to me, and afterward you may make one for yourself and for your son.”


We may first think that perhaps Elijah had not properly 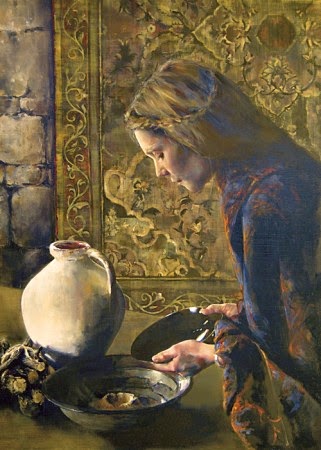 heard the widow. She told him that she only had a “handful of flour,” hardly enough to make Elijah a bread cake and still have some left over for her and her son.


But Elijah had indeed heard her. However, he also told her what God had said: “The bowl of flour shall not be exhausted, nor shall the jar of oil be empty, until the day that the LORD sends rain on the face of the earth.”


It is almost astounding to me that the widow did as Elijah told her to do. Whatever was the depth of her belief in the LORD God, she at least decided that she would believe him this far. The result was that she made the cake first for Elijah, then for her and her son. After that, just as Elijah had told her, the flour and oil lasted for many days, until the drought had ended.


The lessons for the widow did not end, however. God tested her belief (and that of Elijah) even further. Her son became so ill that he died. The distraught widow came to Elijah, and in not so subtly a way, blamed him for the boy’s death.


“What do you have against me, O man of God?” she cried to him. “You have come to me to bring my sin to remembrance and cause the death of my son!”


Elijah seems to be shocked at this turn of events. He took the boy in his arms and brought him up to the room on the roof where he was staying. Now it was his turn to cry out.


“O LORD my God, have you brought calamity upon this woman by killing her son? ...Let this child’s life come into him again!”


God answered the prophet’s request and revived the boy. Elijah then brought him down to the widow. “See, your son lives,” he simply told her.


“Now I know that you are a man of God, and the word of the Lord in your mouth is truth,” the widow responded. Whether she had been a true believer in God before may be in question, but it seems that now she had been convinced.
Posted by Donald Rhody at 8:21 PM