My sweet wife Vivian did not like my poem about logging on a windy day. She said that she related too much to the thoughts of the wife at home and remembers many evenings when we were first married that she had felt the same way when I was in the woods working late.
Here is a happier story about the logging industry. This one is about an old sawmill here in our town of Spirit, Wisconsin. It is no longer in existence, but was until about 20 years ago. I was the last to work the carriage of the mill, and my cousin Gene was the last sawyer. The old sawyer in this story, however, is an older man who passed away many years ago. The photos are from some of the last logs that this old sawyer cut when we were cutting lumber one spring.
I have put up a few posts in the past days, but Vivian and I leave for New Zealand today and I am not sure when I will be able to again. I have training seminars to do in Samoa, Vanuatu, and Fiji. I appreciate your prayers.
We will be back for maple syrup season.


The old sawmill stood, a bit stooped over, on the north bank of the Spirit River.  She had ripped her way through many giant pine and hemlock logs from the great forests of Northern Wisconsin.  It was these forests that built Chicago, and when the city burned late in the 19th century they built it again. 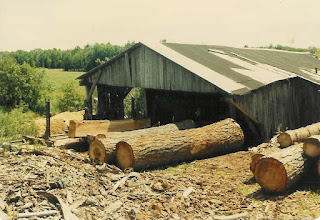 But that was when the sawmill was in her prime.  It was when every metal part glistened from constant use and from care.  It was when she watched as the logs came floating down the river next to where she sat, and she anticipated the fine lumber that would be made.  Men would gather every day to discuss the happenings of the new community while they tended and cared for her. They then start up her snorting engine to begin the day’s sawing.
It was a different age back then.  Today’s sawmills were of a new generation.  The new saws had computerized laser tracking and even x-ray scannars to get the most usable lumber out of each log.  The old sawmill admired them.  She once prided herself in her accuracy, but she knew that even at her best she would have been no match for the precision and speed of her younger sisters.
Now, many of the sawmill’s parts were worn from years of use.  Her once gleaming steel had been invaded by rust, like gray hair on a once youthful head.  The track that her log carriage rode on was not quite level, as the frost from many winters had shifted the ground under her.  The beams of the roof were sagging and the sawmill felt that she had lost her girlish charm.  The old sawmill stood abandoned for most of the year.
But every spring something happened.  The old sawmill by the river dreamed about it all winter as she lay sleeping under her deep white blanket of snow.  When the sun began to find his strength again and draw the sawmill’s blanket back, and when the river that had also been lying, sleeping silently all winter, began to gurgle and spill over its banks, she remembered the days of her youth.
The old sawmill once again began to hear the voices of men.  She would again feel their hands as they put grease into her creaking joints and shim up her track that had sagged a bit more this year.  She felt like a young girl again as these suitors came to tend her.  It was for these days she waited all year.

Although she had been sleeping, the men of the community had been busy all winter.  Most of the men were farmers now instead of lumberjacks.  Oh, there were some that were still loggers, but others had employment in town.  However, all of these men who came to tend her had had some time during the winter to fell a few chosen trees from their own forest and bring the logs to her rollway.  All the men needed lumber for some building project they had or for repairs around their farms.  The sawmill was old but she was still needed and loved. 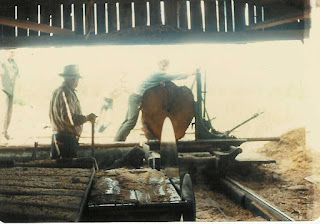 There was one these men who knew her best.  He was the old head sawyer.  His age did not match hers but he, too, had seen his days of prime melt away like the snow.  He walked a bit hunched over and with careful and measured steps.  Some of the old sawyer’s fingers were missing from an agony of the past.  It still grieved the sawmill to remember the day.   The haste of youth sometimes causes carelessness.  The sawyer’s hand had come too close to her whirring teeth and a knot of wood had caused his hand to slip.  The sawmill also had been too hasty.  All she knew was to cut whatever was given to her, and when she felt his hand in her teeth it was already too late.
But the grievous deed seemed to have not diminished the sawyer’s love for her.  There are some days of hurt that come from any love relationship, and the sawyer had forgiven the sawmill.  Now, after their many years together, it was the head sawyer who knew just where the old sawmill needed a shim to level up her track.  It was he who knew exactly the right angle to run the file over her blade to bring the sharpness back to her teeth.  He seemed to hold no bitterness as he stroked the very teeth that had cut him.
The other men followed the head sawyer’s instructions.  They were younger and eager to get their lumber sawed so they could get on with their affairs, but she and the old sawyer could not be rushed.  Both of them lacked the precision of their movements of past years.  Now each motion had to be measured carefully.  Each cut had to be performed with deliberate care.  The old sawyer told the men how to prepare the sawmill for her task.
The old sawmill by the river felt like a queen as her subjects where tending to her every need.  She felt like a lover as she sensed their caressing hands upon her.  She felt like a young athlete whose trainers were getting her ready for a championship event.  She felt needed.
She was needed.  Perhaps not in the same way as she was in the past, but in many ways her role was even greater today.  Certainly, these men who had put their logs on her roleway had a need for the lumber that she would saw in the spring.  That need remained unchanged.  But she noticed a deeper need.
The community had changed.  Each of these men was busy all year with their own personal affairs.  They each had many responsibilities that occupied their time.  Each had, in many ways, become self-sufficient.  They had their own employment and their own resources.  Not all of these changes were bad, but she knew that one must never lose the sense of community.  The old sawmill happily began to see that same community spirit come to life again each year as the men came together to work with one another to cooperate on their common objective. 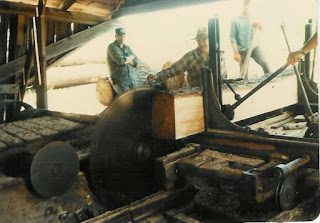 The antiquated sawmill had none of the automation of the newer generation of sawmills.  With her, the heavy logs had to be moved and positioned by hand.  The men grunted and sweated side by side as they tried to put a burdensome log in just the right position onto the carriage that moved the log past her teeth.  She giggled to herself as she saw their clumsy efforts.  They were not used to this type of work.  Sometimes what one man was doing on one end of the log was exactly countered by the man on the other end.  Then there was always two or three of the men present who seemed to think they could best help out by watching and yelling instructions.  The sawmill thought she heard the old sawyer chuckle, too.
Finally the log did come to rest in its place.  The dog clamps of her carriage came down to hold the log firmly so that it could be sawed.  Above the noise of her ripping blade the sawyer signaled instructions to each man, as each had a role in sawing this log into lumber.  The men were unskilled at the tasks and tools that their fathers knew well, but working together they finally were able to saw good boards from the trees they had brought to the sawmill during the winter.
A deep satisfaction came over the old sawmill as she saw these men work together.  She was more than a queen.  She was more than an athlete.  What she accomplished each spring was to remind each man that they needed one another.  She could see something come to life in them as well.  They could not exist isolated from one another and still live a contented life.
When the last log of the spring had been transformed into lumber the men shut off her engine and she lay there silent.  She was tired!  When she was younger, she felt she could work straight through the night.  But no more.  The men once again cared and tended her so she would sleep well.  They put grease in her old joints so the rust would not steal more of her movement during the year.  Then they loaded their fresh smelling boards onto their trucks and bid each other farewell.  The old sawyer was always the last to leave.  He made her as comfortable as he could before he left her to rest.
The muscles of the old sawmill were tired and she looked forward to a long sleep.  She began to close her eyes and grow drowsy.  She had relived her youth for a few short days and it was enough for another year.
The sawmill by the river knew she could not match the precision of her younger sisters with all of their advanced technology, but she felt as if they would never know the joy that she lives again every spring.   The sawmill had relived her youth but she had also brought to the men a reliving of an age of yesteryear, and they were made the richer for it.  She began to close her eyes until the following spring.  May all rest well.
Posted by Donald Rhody at 6:13 AM