LOGGING ON A WINDY DAY

This is only a story. No deeper layers of meaning or anything like that, but only a story in the form of a poem. However, I think that this is the first poem that I have ever written that I would call a tragic story. The poem began to take shape in my mind on one windy day when I actually was out in the woods logging. Honestly, when I started writing it, I did not have in my mind the story below, but as the poem came, it took on a characteristic of its own. This is what happens in any creative work, a phenomenon that I describe in my book, Reaching for Eternal Truths when I talk about the sovereignty of God and the free will of man. 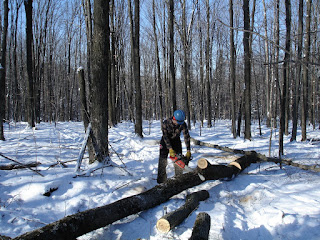 As tragic as the story in this poem is, it is a real danger. I have read that logging is the most dangerous of occupations; even more dangerous than mining. You will have to look it up to see if this is actually true. But whatever is the case, I have had at least three friends and high school chums that were killed in a manner that may not have been exactly like that described in this poem, but neither were they very dissimilar to this. May God be with them and their families.

The photo is of Levi, who worked with me while he was home on break this winter. I put him in here because I thought he struck a much more manly figure than me.
LOGGING ON A WINDY DAY
By Donald Rhody
The top limbs of the trees were whipping around
Like scandalous tongues when they are left unbound.
The tale they told was, “If you do not take care,
Danger is waiting for you high in the air.”
The wind had blown itself into a fury,
An impatient wind, a wind in a hurry.
If any tree had a weak branch or a top,
It would break in that wind and fatally drop.
The logger knew all that could happen that day,
But he had payments to make and bills to pay.
He kissed his young wife as he told her goodbye,
Trying hard to hide the concern in his eye.
************
He started his chainsaw, it was new that year.
With the noise of the saw he failed to hear
The roar of the wind and the snap of the limb;
But as it struck, he knew what happened to him.
He scarcely had time to make even a sound
Before his lifeless body fell to the ground.
The spot where he fell was his last earthly place –
The blowing snow melting on his still-warm face
************
Back at his home the supper was all prepared,
And the children all sat squirming in their chairs.
Their mom let them start, “Dad will soon be along.”
But her heart was telling her something was wrong.
As the children sat eating, she called his friend,
“He’s not home yet, and I’m afraid of this wind.”
The cold night was black and devoid of all light.
The friend feared the truth he would find in the night.
He drove his truck, and in the headlight’s dull glow,
He found his young friend lying still in the snow.
The flakes no longer melted on his friend’s face.
There was nothing now but depend on God’s grace.
“What will I ever tell his kids and his wife?”
“How will they bear this great tragedy of life?”
And there in the snow of his friend’s logging job,
He fell face down and uncontrollably sobbed.
************
Back home it was late; the kids were put to bed.
Though mom sensed the horrid truth, nothing was said.
She kissed their little heads and told them, “Sleep tight.”
Then waited the news coming later that night.
Posted by Donald Rhody at 7:10 PM