WHAT I LEARNED FROM MOSES AND THE ORPHANS OF KENYA 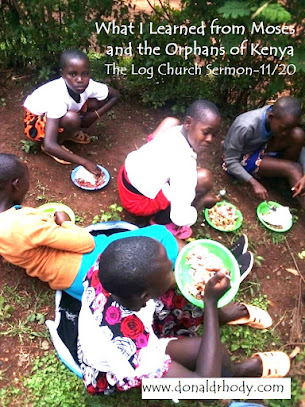 Do ever experience moments when a seemingly insignificant action or item suddenly triggers a memory of something that happened years in the past? This happened to me some days ago as I was putting on my warm boots to go outside.

When we were growing up, Northern Wisconsin was not a wealthy area. It still is not, of course, but for you younger people and for those who have moved here, it is much different today than it was in the 1960’s. In 1964, as part of what then President Lyndon Johnson’s called “The War on Poverty,” Price County, Wisconsin was named one of the poorest counties in the United States.

Most of us who grew up here grew up in very humble circumstances. Interestingly however, probably none of us realized it. Our neighbors lived in the same conditions that we did. In our farming communities, we always had plenty of food to eat. We grew up happy. President Johnson may have said that we were poor, but we just laughed at that notion.

But in retrospect, we probably were poor. At that young age, I was unaware of the struggles that my parents may have had financially. I did not know what they talked about after all of us kids were in bed. I do not know of their worries and concerns. I do remember that my dad painted the back-seat windows of our 1955 Dodge Coronet, because of some loophole in the Wisconsin DOT laws, the sedan then qualified as a pickup truck. In that way dad could license it as a “farm truck,” and save maybe five or ten dollars every year.

But as kids, our bellies were full, and we were happy. So for those of you who are new to the area or of a younger age, that was the situation growing up here in the 50’s and 60’s. And as I said, I tell you these things not to attempt to evoke some kind of emotional response from you, but just to tell you how it was.

Additionally, being used to growing up with no money, when many of us got married, it seemed not so important to have much money. Vivian grew up in similar circumstances in South Dakota, so none of this was too foreign to her. “Getting married on a shoestring,” they used to say.

When she and I got married, I remember getting wedding cards, many of them including a dollar or two, and even ten dollars. And I remember also one card that, on the front, said something to the effect of “I know you’re getting married on a shoestring, so inside you will find something to help you get started…” then you open the card to see, not a ten-dollar bill, but a shoestring! Inside the card said, “Here is the shoestring. The rest is up to you!”

It was a humorous card, but perhaps also just a little bit cruel as well.

But the fact was, the person who gave the card actually had very little money herself. Many gifts were very simple and practical. For one wedding shower gift, Vivian received a can of beans with one of those old type hand can openers. And I remember thinking, “What a great gift! Something we can use!”

And just as we were in childhood, Vivian and I were happy. Our clothing, appliances and furniture came from garage sales and second-hand shops (much of it actually still does). We had nothing, but we had everything. We were happy, and more significantly, we were so thankful.

And now to the memory that came to me as I was pulling on my warm boots to go out into the now cold winter weather. When it comes to having warm feet and hands in the winter, I am rather a wimp. My hands and my feet either seem to get cold faster than they do on other people, or else I am just a wimp.

When we were first married, I worked in the woods. I was a lumberjack. Since I have this weakness for cold feet, whenever we went to a second-hand store, I was always on the look-out for a warm pair of boots. Some that I found were better than others, but I will not say that I ever found a pair that kept my feet warm. There was a reason that the people were selling them. They all seemed to have a little unpatchable leak that let some snow in.

Finally one year, we had gotten ahead enough that I bought a new pair of Sorrels with thick felt liners. Putting my feet in them was like wrapping them in a thick, cozy quilt. My feet stayed warm all day.

How thankful I was for those boots! During that first winter, I thanked God every time I put them on, and throughout the day I made note of how my feet were warm, and thanked him again.

So, the other day when I was pulling on my warm, completely waterproof, felt lined and steel toed boots, for some reason the memory of those first boots came to my mind. For years I have not thought about those times of working in the woods with cold feet, and then getting my first pair of warm boots. I thanked God again for my boots.

God has been good to Vivian and I in these intervening years. As I said, we still may frequent second-hand stores and garage sales, but when it comes to buying winter boots, I look for the best. God has continued to bless us, but as I pulled on my boots that day, I realized that although God’s blessings in my life have continued and have even grown, I wasn’t sure if my thankfulness had kept up with his blessings. I now usually just pull on my boots and go outside without any further thought.

I think that it was perhaps my experience with the orphans in Kenya that made me aware of my lack of thankfulness. I have lately been putting the stories of the orphans on my blog page. Hearing some of their histories is heart-wrenching. Four- and five-year-old kids found looking through garbage heaps for food. Parents killed before their eyes by a neighboring tribe. When the kids lived on the street, several of them, even seven- and eight-years-old children, were suicidal. They saw no escape from misery except in death.

But the people from the Log Church of Kenya rescued them from their life of hopelessness. Of course there are scars, but the kids are so thankful to be alive and with a hope for some type of future. Their life now is not perfect. They pass some days each month without food to eat. They often walk without shoes. But they remember from where they had come. They are so thankful for what they have now.

As I remembered my own years of cold feet, the thought of these kids also came to my memory. I prayed, “Lord, may they ever be thankful for Your rescue.”

But perhaps more importantly to me at that moment, the thought came to me that my thankfulness had not kept up with the blessings that I have received throughout the years. Things that I once considered as great gifts from God were now just expected. I did not think of thanking God for the provision.

As I sat in the chair, my boots now on my feet, I determined that I would thank God every time something good that I have received came to my mind.

There is great danger that we should merely expect that we should live in comfort and with warm feet. It is a lesson that Moses tried to teach the people of Israel as they came out of Egypt. He told them this:

Remember that these forty years the LORD your God led you all the way in the wilderness, so that He might humble you and test you in order to know what was in your heart, whether or not you would keep His commandments.

He humbled you, and in your hunger He gave you manna to eat, which neither you nor your fathers had known, so that you might understand that man does not live on bread alone, but on every word that comes from the mouth of the LORD.

For the LORD your God is bringing you into a good land, a land of brooks and fountains and springs that flow through the valleys and hills; a land of wheat, barley, vines, fig trees, and pomegranates; a land of olive oil and honey; a land where you will eat food without scarcity, where you will lack nothing; a land whose rocks are iron and whose hills are ready to be mined for copper. When you eat and are satisfied, you are to bless the LORD your God for the good land that He has given you.

Be careful not to forget the LORD your God by failing to keep His commandments and ordinances and statutes, which I am giving you this day. Otherwise, when you eat and are satisfied, when you build fine houses in which to dwell, and when your herds and flocks grow large and your silver and gold increase and all that you have is multiplied, then your heart will become proud, and you will forget the LORD your God who brought you out of the land of Egypt, out of the house of slavery.

He led you through the vast and terrifying wilderness with its venomous snakes and scorpions, a thirsty and waterless land. He brought you water from the rock of flint. He fed you in the wilderness with manna that your fathers had not known, in order to humble you and test you, so that in the end He might cause you to prosper.

You might say in your heart, “The power and strength of my hands have made this wealth for me.”

But remember that it is the LORD your God who gives you the power to gain wealth, in order to confirm His covenant that He swore to your fathers even to this day.

If you ever forget the LORD your God and go after other gods to worship and bow down to them, I testify against you today that you will surely perish. Like the nations that the LORD has destroyed before you, so you will perish if you do not obey the LORD your God. (Deuteronomy 8:2-20 BSB).

The Israelites have their own story. Each orphan in our orphanage has his or her story. And each of us have our story. But all of these stories, although they are different in detail, are actually the same story.

For this we must be thankful, and be ever thankful—not forgetting from where all good things come.

“Every good and perfect gift is from above, coming down from the Father of the heavenly lights, with whom there is no change or shifting shadow” (James 1:17).