Kwamboka’s mother was homeless and she was raised by a friend who took her to school until from 2 when she received earlier pregnancy and dropped out of school giving birth to Kwamboka. This caused her to be chased out of this home and she got married and stayed in a rental house until she gave birth to Kwamboka.

Her marital life lasted for 5 years and later her husband disappeared, leaving her with this kid Kwamboka. The mother of Kwamboka struggled with hard life of being jobless for 3 years until one morning when she threw Kwamboka in Nyamasege Street after selling house properties and went to unknown place.

Kwamboka joined other street children and continued to stay with them having some hopes of feeding from left overs and begging food from strangers. One day this kid Kwamboka saw us from a distance as we were carrying our bibles to evangelism at Riteke Village. She ran to us and requested for prayers leaving other street children behind. Her prayer item was to get saved and God to touch her mother that she could come for her in the street.

Information from close neighbors was that Kwamboka’s mother had said several times that because of hardship of life she will poison her daughter Kwamboka and disappear so that she can be flexible and at least be free from struggles of taking care of Kwamboka! For a long time she said this until one morning when she managed to throw her daughter in this street!!

We prayed for this kid and she was in love with one of our orphanage kid who accompanied us by the name Harite. This kid Harite cried when we wanted to leave Kwamboka after praying for her!!! And Kwamboka also was following us behind not ready to leave us!! Our orphanage kid Harite was crying while begging us to adopt Kwamboka to the orphanage. We were eventually overwhelmed with sympathy and allowed Kwamboka to go with us, and after evangelism it was evening time and we brought her in the orphanage facility.

Kwamboka was helpless in the street but now she has somewhere to belong, she is very thankful to Harite who caused us to give her access to the orphanage and she is also thankful for the support from Pastor Donald Log church USA and love in the church to continue sending help and God bless everyone who gives financial support to our orphanage.

She likes drawing and she has a passion of becoming a nurse. In church she is one of the best kids who recite memory verses. Kwamboka is requesting Pastor Donald and log orphanage to continue. 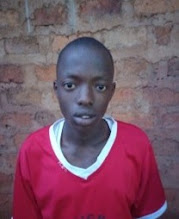 
Mathew’s mother was employed as a house girl by Ogembo tea factory manager since the year 2005. In the year 2006 she was given pregnancy by a married man who worked in this factory as a watchman. When this watchman realized that this girl had conceived his pregnancy, he abruptly stopped working and disappeared with his family to avoid shame and as a means of protecting the possible separation of his family, in case his wife should find out what he had done to the house girl!! The wife of the manager where this house girl worked was good enough to contain the situation of Mathew’s mother despite the fact of getting pregnant while staying with them as a house girl.

Mathew’s mother was given humble time and was shown love until when she gave birth to Mathew in November 4th the year 2007. Mathew’s mother again came to seek for a job in the manager’s house, because she had already been misplaced from her family due to conflicts. Her family could not be traced and this also contributed for sympathy on her from the manager’s family.

She was given the job and faithfully served as a house girl until the year 2017 February when she went out for shopping in Itibo market but never returned to the working place. The manager’s wife continued to stay with her son Mathew and could support to educate him as he did from the previous years when her mother used to work there as a house girl.

Mathew being abandoned by his mother could not have peace although he was under good care. One day he left school without the knowledge of his guardians (the manager’s family) and went missing for three days. On the fourth day upon his return he explained that someone lied to him that he saw his mother at Riosiri market which is located in our neighboring county called Nyamarambe selling sugar cane. He had made up his mind to seek for her personally.

This offended the manager’s family and he was chased from  this family because of staying out of home for three days while avoiding classes and without the manager’s authority and knowledge.

From there Mathew started going around into different families searching for help but he could rarely get accommodated and given a place to sleep for only one night to vacate in the following day. This young boy went through hard times and his lifestyle was not promising.

We met him in need of help and with that big heart brought him to the orphanage. His mother is still missing nowhere to be seen. This boy had been in a hopeless situation, but now he has hope.

Mathew gives God gratitude and his best regards goes to Pastor Donald for the continuous support he received from him and the church too. Mathew likes athletics and dancing. He will use his talents for God’s glory and more especially to train others in dancing for God as a means of serving Him with his talents.

God will reward Pastor Donald and Log church for their generous giving to support us in the log orphanage. AMEN