Because we have not seen the children of the orphanage for a very long time, I asked Pastor Joel to once again begin sending the histories and present stories of them to share on the blog. We will try to post two or three each week.

Here are the first two: 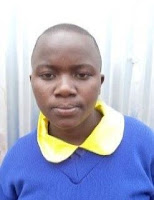 
We found Yvonne in Kembua Street in the year 2018 February. This girl had been in this street for six months before we meet her during evangelism. She used to live with her aunt in Kebirigo town but quit unfortunate one day Yvonne came back from school and found none in the rental house where they used to stay with her aunt!! It is said that she was raised by this aunt from childhood after her mother died.

This aunt was childless but could support Yvonne as her daughter. Yvonne was raised in this town of Kebirigo and didn’t know any relative throughout her life!!! This girl was shocked to find an empty house where they used to stay!!    She tried to inquire from neighbors what had happened but no one could tell the story, eventually one of her friends told Yvonne that her aunt migrated to a place called Kembua. Yvonne had only Kshs 150 in her pocket and she used it as bus fare to this place Kembua looking for her aunt. She could not manage to locate her aunt. Now being in a new town she found it very difficult to interact with strangers in this new town.

This is where she started a new difficult life in the street being homeless and starving without food most of the days until the 6th month of her struggle with street life when we meet her during evangelism and she demanded our attention and help. After questioning her we took a tax and travelled to Kebirigo where they used to stay with her aunt before but the result was not that good, because the rental house was still empty!!!

We decided to adopt Yvonne in the orphanage and now she has the joy of our Lord Jesus in her life. She was at the risk of being raped and ambushed in the street but now she is secure and she is cared for. Yvonne is appreciating God for the generous hand of support from Pastor Donald and she is very happy to be in log orphanage where she has been given security, provision to her needs and education. She is extremely glad for knowing to write and read.

Yvonne is one of the talented singers and wants to praise God through her talent to save the lost souls and win them to Christ. Recommendation to pastor Donald for love and support.


Sylviah’s mother was a very careless drunkard!! She was alcohol addicted. Although she was always drunk after work, she used to support her daughter with the basic needs such as food clothing and also education. But the house rent was a serious challenge for her to settle and it had accumulated for 2 years.

The landlord was now impatient and cruel enough to chase away Syliviah from her home! Sylviah became helpless, and later after months of her hustling she visited our church during Sunday service after which she told one of our ushers called Isaac about her terrible life experience!! She was given a chance to speak in front of all the believers and we were all touched and moved by her situation.

Through the sympathy and the mercies of God we could not let the girl go back to a miserable life in the street but we retained her and took her to the orphanage facility. On the following morning our two church elders went with her to the landlord to know the story and they came up with the very same information from the landlord.

We opted to allow Syliviah stay with other kids in the orphanage and now she is ever smiling for the provision she gets and the love in the orphanage facility. She has hope of finishing school through Pastor Donald, she never knew that she will live with hope but through Pastor Donald and good friends from a very far country God has manifested to her life. She has a passion of becoming a teacher by the grace of God. Thank you very much pastor Donald and Glory be to God almighty