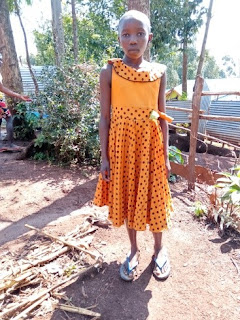 Harite’s mother was suffering from mental illness!! Her mother was called Mary. She came to Ogembo sub-county with a child of 5 years old (Harite) from unknown place. Mary could spend the night in public shelters and sometimes in streets together with her child Herite.

Harite could face challenges of being raised up with a mentally disturbed parent but at her age could not realize the condition of her mother. In the year 2018 we were shocked one morning that Mary was found dead but her child. Harite was huggingh her mother not knowing she was no more!!! Her body was buried at Nyambera cemetery.

We had to pick the child and come with her in the orphanage through sympathy. The following day was on Tuesday and pastor Vincent took her to Kimai Primary school after we bought her school uniforms, books and a pencil. Upon reaching at school, Harite was interviewed by class one teacher and the teacher enrolled her in class one.

We asked our upper classes kids in our orphanage to keep coaching Harite evening times daily after school and by the grace of God Harite is now in class 4. Harite is very proud to be in the orphanage and she is delighted to receive good care and love in this premise, she likes making decorations and she wants to be a decorator in the church after school. Keep her in prayers. 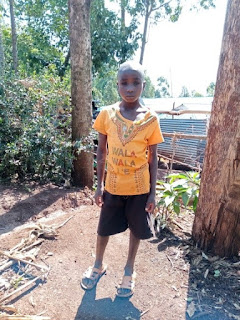 YEAR HE CAME TO THE ORPHANAGE 2017

Emmanuel’s mother was a prostitute in Nyakuerigeri bar located at Mogonga. She served in this bar right from the early age of 16 years to 23 years when she conceived and bore Emmanuel while staying within the bar premises. When Emmanuel was six years old  his mother went through medical examination and the doctor diagnosed her with HIV/AIDs.

The same evening after  the test, she hanged herself in the room where she was  living and died whereby she left an orphan. Since the family background of Emmanuel’s mother was not known, the government ordered the bar owner to adopt this child Emmanuel, but he refused. After persistent pressure from the government the bar owner took Emmanuel to his home, but conflict started among the family members wanting this kid Emmanuel to leave their home.

Because of disagreement, the bar owner went to unknown place and one month later his wife also chased Emmanuel from their family. With her two children she also vacated the home. This boy Emmanuel became homeless for the one week until a certain lady brought him to our orphanage as a good Samaritan requesting us to admit Emmanuel and give him care. It was a challenge for us to accept Emmanuel, because but the situation was really demanding. That is how this young boy became part of the orphans.

Now Emmanuel is in class one and he leads in his class with position one out or 65 children enrolled. Emmanuel is thankful to be in the caring hands of God, he is excited to join school like other kids and he has a passion to be a pastor.

*********************
If you would like to help the children of the Log Church Orphanage of Kisii, Kenya, you may make your check out to “The Log Church” and write “Orphans” on the memo line.
Send it to:
The Log Church
PO Box 68
Tripoli Wisconsin 54564
We now need to pay a wire transfer fee with every payment, which amounts to $50 each time, but other than that, your donated money will be used only for purchasing food, clothing, schooling, and other necessities of living. Nothing is held back or diverted for any other purpose. Thanks!
Posted by Donald Rhody at 5:15 PM