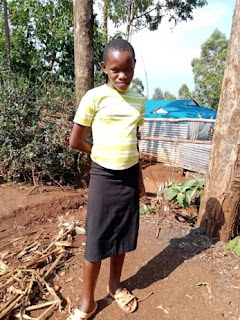 YEAR SHE CAME TO THE ORPHANAGE 2016

It was two months after we had rescued a boy by the name of Kemiso David out of the street and bringing him to the orphanage that he requested us that we may go and pray for the three other kids that used to be with him before in the street. We went there for prayers with our prayer team but we did not find all the three kids in street but only Jackline was there. The other two street kids had gone to join other street children in the next sub-county called Nyamarambe to search for food since the environment where they used to stay was becoming hostile with inadequate food left overs and they were rarely fed by strangers in the town.

We did not follow them to Nyamarambe but we prayed for the young girl Jackline. We bought her some snacks and provided her with two clothes. But at the time when we were leaving she terribly cried that we should not leave her alone in the street and she was very tired with street life, she told us that if we were not to go with her she would simply kill herself by taking poison later on after we have gone!!!

The only option was to bring Jackline to our orphanage. Jackline is happy and thankful for the orphanage environment where she is being provided with shelter, food, clothing and she is glad to join school like other kids of her age. She likes singing and always tells us to pray for her that  in future she would be a gospel artist who can bless the nations with good singing and praising God through her voice.

She likes to quote that “with God all things are possible”. 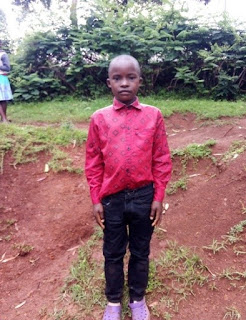 FOUND :        FROM THE STREET DURING EVANGELISM

One Friday Evening when we were heading home from house to house evangelism at Riteke village we met Moses lying beside the road. There was a huge crowd surrounding him just watching his unconscious body down on the ground.

We also stood with pastor Vincent and Janet our praise and worship leader, when we inquired we were told that the boy Moses was a street boy and in the previous two weeks, he was seen that his health was not good but that day it worsened!!! The market people were there just watching him die because everyone feared taking him to the hospital thinking about what will happen if he will die on their hands!!

We over stayed there within  the crowd hoping that a good Samaritan will volunteer to carry  the responsibility  of taking this helpless boy to the hospital but unfortunately no one was ready for that!!! All of a sudden Janet our praise and worship leader touched me on my shoulders and whispered to me saying “kindly pastor Joel let us take this kid to the hospital and do not worry he will not die on our hands for the grace of God upon us can cause healing to the boy.”

After Janet finished whispering this on my ears, I only said “No problem let us do our part and God will do the rest.” We picked the boy Moses from the midst of the crowd down on the ground and took him to Tabaka Hospital whereby we shared the issue with the medical officer and he received treatment on debt.

The doctors discovered that Moses was suffering from severe pneumonia since he was exposed to excess coldness there in the street where he slept on the cold floor. On the third day when we went to visit him in the hospital we were amazed that he had totally recovered from the disease. We could not manage to settle the bill but by good luck one of the doctors helped us to clear the bills after discovering that Moses’ Mother dropped him in this market and lied to him that she went for some shopping in the super market before they proceed their journey from Nairobi  to up country.

But it is so sad that this was a way of escape abandoning his son by the roadside while away from home. This is how the boy started hustling with street life after his mother failed to return to pick him!!!

Since then it is almost two years the mother is missing and the family background is not known. By the advice of the doctors that Moses needs good care and a good sleeping to avoid more attack from pneumonia and other diseases we found that we were the only option to take care of Moses then we came with him in the orphanage.

Moses is humbled for the way God used us to save his dying soul and he is praising God for the support and love he receives  from Pastor Donald in connection with the church of Kenya Moses likes quoting that he is  a live through the grace of God and he will live to worship him and serve him with all his strength.

We now need to pay a wire transfer fee with every payment, which amounts to $50 each time, but other than that, your donated money will be used only for purchasing food, clothing, schooling, and other necessities of living. Nothing is held back or diverted for any other purpose. Thanks!