IT CAN BECOME FRUSTRATING


It’s like I told the lady from the call center, “Neither was it my 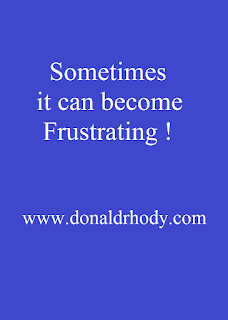 intentions for my retirement years to be involved with a work so stressful as managing an orphanage in Africa.

My own intentions for retirement were to live out some peaceful years with my wife on our little farm. But I found I needed to respond to a need. This work is something that has been given to me to do, and I am simply looking for a way to get it done.”


What was I talking about?
I was responding to what she told me was the reason that I could no longer use the Visa Travel Card to transfer money to our Log Church Orphanage in Kenya.

“How you are using the card is not the way we intend for it to be used,” she told me.

Apparently, the card company did not like the idea that the money was placed in the account on one day in the United States and the entire amount withdrawn on the following day in Kenya.

“The intention of the card is that you put money into the account and then it is withdrawn little by little. It is meant for hotels, restaurants and other travel needs.”

I explained to her about the orphanage and that using the travel card was an easy way for us to get the money to them. The orphanage staff in Kenya do the great majority of their shopping in the market where the merchants deal in cash and where ATM machines are unknown. In fact, in the entire town of Kisii, I know of only one cash machine, which is at the bank and where Joel has always withdrawn the funds.

“Well, that is not the way that the card is intended to be used.”

It may not be the way they like to see the card used, but by doing what we were doing was not violating any policy.

I only found out about the cancelation of the card by a letter in the post on Saturday, the same day in which I made a special trip to town to send $800. The orphanage was already out of food at that time. The day was almost Sunday there, but Joel told me that they would be able to get the money even on Sunday.

It was when I returned from town and checked my mailbox that I found the letter from the Sioux Falls processing center. MetaBank, it is called. The letter was short and curt. “The card number XXXX-XXXX-XXXX-1234 (Joel’s card) has been suspended.”

No explanation, no warning. It is simply suspended. “If you want to discuss this issue call 555-555-5555 on normal business hours Monday through Friday.” Of course the letter came on Saturday.

It is on that following Monday now that I am writing this and it is after I talked to the processing center of MetaBank. In my calmest and kindest possible voice, while at the same time pressing my point, I explained to them the situation that they had put us in, and the fact that while we deliberated, 49 children and additional staff at the orphanage had not eaten for three or four days.

After getting nowhere, I finely pleaded, “In the name of humanity, can’t you allow this one transaction to go through? After that we will stop using the card and we will bother you no more.”

I don’t know if they suspect me of being a nickel and dime money launderer or what, but I could see I would get nowhere talking to this lady.

She probably did not have the authority to make that decision, and I asked her if it were possible for me to speak to someone who did.

I could “make an appointment” she told me. They would get back to me in 24 hours.

“Don’t bother,” I resonded. I did not feel like going through this entire thing again to only hear the same lines.

For those of you who donated that money, do not worry. I can still withdraw the money here and send it by another method. I did send $600 later today by Western Union, which is a little more expensive to send, but it works. But the closest kiosk that I know of is an hour and a half from our farm, so not handy.

In these days of electronic transfers, I know that there must be other options that I have not yet explored. I must say that, in general, I resist these electronic methods because I like there to be a physical paper trail in case there is a problem, as there was in this case. I also probably resist them because I am old. But this case also demonstrates that having paper does not guarantee that there will be no problem.

International money transfers are often suspect, as it was for me another time when we lived in Guatemala and when I had to make a large bank transfer. We were buying an apartment in a condo to live in at that time. When I transferred the money, I found myself needing to answer a few questions to the Ministry of Finance in that country. They told me that they had to make sure I was not laundering money.

“Ninety-five percent of the time there is no problem,” they informed me, “but we need to try and catch the five percent.”

This present problem also will be resolved. I simply need to find the best way. One thing that I will always assure you, as I state below, every nickel of your gift will always go directly for the needs of the orphans. I cover any other cost associated with the money transfers or anything else.

But I will also ask you to pray that I find the best way, the cheapest way, and the way which will raise the least “red flags.”

It’s like I told the lady on the phone, “I am simply trying to figure out the best and easiest way to do this job that has been given to me.”


If you would like to help the children of the Log Church Orphanage of Kisii, Kenya, you may make your check out to “The Log Church” and write “Orphans” on the memo line.
Send it to:
The Log Church
PO Box 68
Tripoli, Wisconsin 54564
Every nickel given in this way will be used for only aid for the orphans. It will be used for purchasing food, clothing, schooling, and other necessities of living. Nothing is held back or diverted for any other purpose
Posted by Donald Rhody at 8:06 PM