If there is such a thing as a “normal” weather cycle in Kenya, the traditional month for the rainy season to begin in Kisii would be in March, with another beginning in September. But of course, weather cycles are influenced by many variables in climate, including the monsoon winds that blow along the East African﻿ coasts.

These winds were known to the ancient Arabic and Indian traders as the muusum winds (see the similarity) which depending on the time of year, blow either northward along the coast, or southward. In the normal cycle of weather, these convection wind currents will bring rains to Kenya around the autumnal equinox, and the vernal equinox, the last of these which occurs on either March 21st or 22nd, as all of you who watch the weather at 5:15 know.

But lately, things have not been normal in the muusums. Especially in the past couple of years, there have been heavier than normal rains at odd times of the year, including this year. The rains have come early to the Kisii area, and even now there are days of heavy rains. It is not every day, but it is enough that the mosquitoes have already begun to multiply, and with them the new season of malaria. We are thankful for the new dormitory, which offers a great amount of protection, but our children have not escaped entirely this year. Five of them have fallen ill. 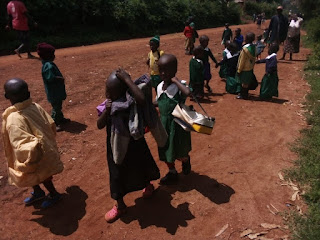 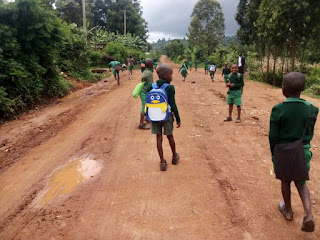 When Pastor Joel wrote to me last week about these five children, he was not sure if they were ill with malaria or pneumonia, since the symptoms are similar in some ways, and they had not yet been able to take them to the doctor. Besides that, they had no money to buy medication.

Pneumonia also can be a problem with the children, since they are often wet from the rain. They walk to school each day, ½ hour coming and going in the mornings and evenings, and an additional time at noon when they are sent home for lunch.

They have no raingear, or even umbrellas, so when they return to the orphanage, they are often shivering from the cold. Kisii is in the higher hills of Kenya, so even if it is quite near to the equator, the climate is rather temperate. A rain can be quite chilly.

Thankfully, last week the Lord supplied (through you), $800 that I could send to them.

Here is how it was spent (figures rounded):

$500 food
Medication for the sick children $200
$100 used to buy warm jackets.
Thank you once again for your kindness in helping these brothers and sisters in Christ. Joel reports that with the medication, they are now improving.

Folks have also been asking me about the locust plague. The latest on this is that the government says that they have it now under control (although many farmers disagree). The federal government has been doing aerial spraying to combat the infestation of locusts, which of course has its own ecological consequences.
It sometimes seem to me that the difficulties that our little orphanage faces are insurmountable, but we have also seen the faithfulness of God in amazing manners.
For me personally, this ministry for me in many ways has been one of the most challenging of my career, but also one of the most rewarding. These children are alive and being raised on God’s word, and the Log Church Kenya is thriving despite their poverty in material possessions.
********************************************
If you would like to help the children of the Log Church Orphanage of Kisii, Kenya, you may make your check out to "The Log Church" and write "Orphans" on the memo line.
Send it to:
The Log Church
PO Box 68
Tripoli, Wisconsin 54564
Every nickel given in this way will be used for only aid for the orphans. It will be used for purchasing food, clothing, schooling, and other necessities of living. Nothing is held back or diverted for any other purpose.
Posted by Donald Rhody at 3:30 PM