There are many very remote places in the area where our Log Church of Kisii is located. In some of these areas, there seems to be relatively little knowledge of the gospel of Christ. When the pastors and people go visiting in these areas, they find a mixture of belief systems—some animism and witchcraft, some Muslims, some with no definable beliefs at all.

When visiting areas, Pastor Joel is convinced that God is leading them to where the people are especially receptive to the message of Jesus, since they are seeing very many people come to the Lord.

The last time that I was in Kenya, which was now almost a year ago, the pastors began to tell me about another area in Kisii County where they had been visiting the homes and bringing to them the message of Jesus.
It was quite a walk away. Pastor Vincent told me that it was 64 kilometers from the where the orphanage and church is located. I am not sure how he came up with that number, but one afternoon Vincent said that he had been there the previous day and had just returned that morning, walking all the way.

I found it just a little hard to believe. 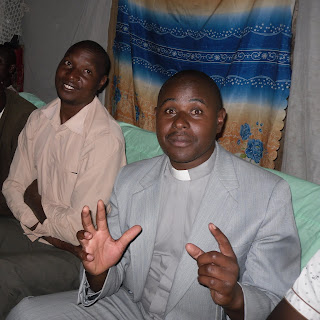 “Well…” he responded with a small smile and a wink in his eye, “You have to understand. The trail is not straight. The way is so hilly and the path winds back and forth so much, sometimes you even cross over where you have already walked!”

Later that day I asked a friend that I have made there about this 64 kilometer number. He is a taxi driver from the area, so he knows the different roads and back trails quite well.

He just laughed. “Those pastors don’t know how far a kilometer is. That area is not sixty-four kilometers from the church.”
﻿﻿
So I am not sure if Vincent actually believes it is that far, or if he was just having fun with the American, but I am quite sure that it is a four or five hour walk and I am also quite sure that since that time, he has walked that path many times. I am also very positive that despite the fact that Vincent has an active sense of humor, he is quite serious about his work for the Lord.

On the last day of my stay there, during the Sunday worship service, some of the people that Vincent had been visiting in that area came walking to the church. They had started out 4½ hours earlier, just as soon as it was light enough to see the trail. They village from where they came and where Vincent has been visiting is called Nyakembene. 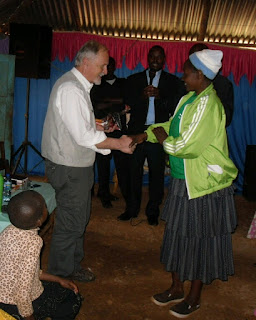 I was so honored that they had come specifically because it was to be my final day there, and they wanted to meet me. One lady presented me with a gift that she had made for what they said was in appreciation for helping the people of the area. It was a stone carving of an African dove. Kisii County is actually known for these types of carvings. I accepted it for all of us. 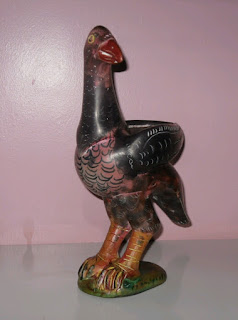 Since those beginning visitations by Vincent and the other pastors, the people in Nyakembene have gathered themselves together to begin a church in that area—a second Log Church of Kenya. Pastor Vincent Osoro has continued to minister there, along with a local brother they have named as the associate pastor, Pastor Moses Nyanducha.

I am told that the people of the area are very poor, even more so than where the main church is located. There are many financial needs, but they have managed to construct a place of worship and to purchase 40 chairs. But the number of chairs along with the building itself is far from adequate, since they currently have about 170 members. 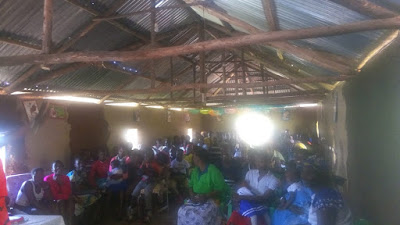 Between the two churches, there are now about 450 members in the Log Churches of Kenya. The work is growing very rapidly, since the response to the gospel has been so dramatic.

In it all, the burden of the people for the children is very high. With the work in Nyakembene, seven more children have been given a place in the orphanage, making the total number of orphans in the home to 49. 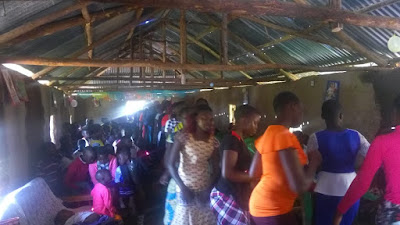 The need is so great. The leaders of the church have to be very careful not to overextend what we can do. As you know, it is a struggle even now. We trust the Lord at every step, but we also must be wise about what he has given us to do.

I will be writing more about this work in Nyakembene, as well as the other efforts of the pastors and church members of the Log Church.

I have also lately been talking more with them about some new efforts in food growing, such as beginning a hydroponics garden for raising vegetables. Since cropland is so scarce, I am wondering about the feasibility of growing food even on the roofs of the buildings.

If you would like to help the children of the Log Church Orphanage of Kisii, Kenya, you may make your check out to "The Log Church" and write "Orphans" on the memo line.

Every nickel given in this way will be used for only aid for the orphans. It will be used for purchasing food, clothing, schooling, and other necessities of living. Nothing is held back or diverted for any other purpose
Posted by Donald Rhody at 7:43 AM