KISII REPORT - A MESSAGE TO NAYSAYERS 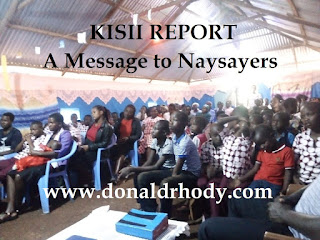 I am constantly asked these types of questions by people who are questioning my involvement with the Log Church and Orphanage in Kisii. I must admit that it sometimes becomes a bit frustrating, because of course I am not there in person. I cannot go to the market with the people. I cannot be at the schools when they
pay the bill.

We live in a dangerous world: Hackers and Scammers. Cheats and Con-men.

It all becomes more difficult in these days of the 21st century and global communication. 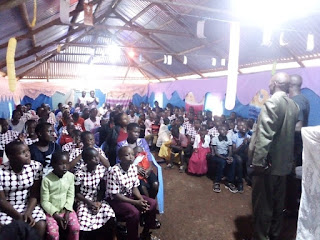 There are evil people in the world who will try any means to take what is not theirs. These evil ones we try to confront: Verification and Corroboration.

But there is also other factors involved in the work of God. There is a point where one must listen also to the Holy Spirit. When God is involved, there is Faith, and there is Belief in what He is saying.

This difficulty in verification of what is happening in remote places may seem like a new phenomenon to us, but it  has actually always been this way. The Apostle Paul also had to deal with a similar problem of not being present with the people even in the very 1st century.

“Some from Chloe’s household have informed me that there are quarrels among you,” he wrote to the church in Corinth.

“It has actually been reported to me that there is sexual immorality among you.”

“I hear that when you come together that divisions exist among you.” 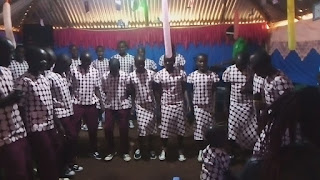 Paul was not in Corinth to verify this. He had only been there some years earlier. He had heard of the news there only by word-of-mouth.

Some years after this, probably when Paul was in the prison in Rome, he also wrote this to the Colossians, “For I want you to know how much I am struggling for you and for those at Laodicea, and for all who have not met me face to face... For although I am absent from you in body, I am present with you in spirit, and I delight to see your orderly condition and firm faith in Christ.” 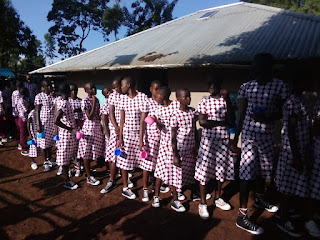 I somewhat feel the frustration that Paul must have felt. I am sure that there were many things had been reported to him concerning the churches that he had begun. How was he to know what was actually true? He was not there. He could not see these things with his own eyes.

Nor am I in Kisii when I am told how much the food is costing—but I have been there before to see, and I know that the heavy rains have prevented many vegetables and other crops from being harvested, if they were planted at all. 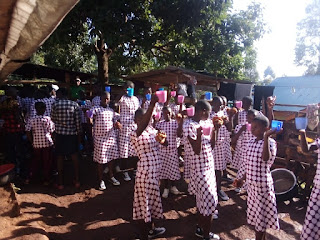 I am not at the schools to know what the fees are, but I have looked at the on-line Kenya newspaper articles to see some of the costs at various schools (ours are less expensive than most).

From the very beginning of my involvement with the church and orphanage, I have tried to verify what was told to me at every step. You have to go way back on this blog site to November 7 of 2017 to read what I think was my first entry about the work in Kenya. At that point, I was about to embark on a trip to see for myself what was happening there and what the true situation was. 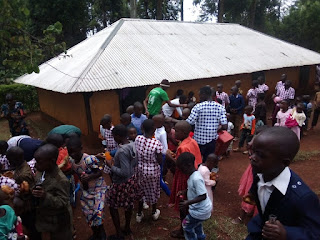 But it is long before that when I was first shown this need—more than year before that time. From the very beginning, I had a sense that this was a work that God was giving to me.

For an entire year, I fought against God’s leading. 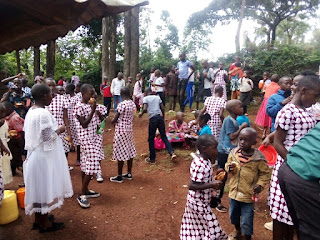 But God did not let me rest.

After a year of that spiritual struggle, I finally told Vivian, “I have to go to Kenya. I cannot continue my life and pretend that God is not calling me to this task. I at least need to check it out.”

In the years since that time, almost every decision that I have made has been a combination of faith in God's leading and trust in the people, coupled with verification as much as I could. But it is not cheap to go to Kenya. I cannot simply go whenever I have a question. Besides that, there is the fact that I really am not looking to make another trip. 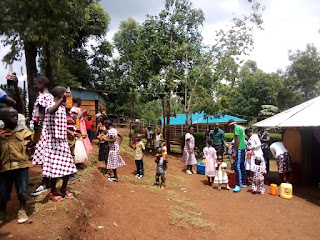 have doubts, I will continue with this work as long as the Lord directs me. I have come to have great confidence in Pastor Joel and the Log Church leadership there. As far as I know, they have always been 100% straightforward with me, and they are doing a work that no one else seems to want to do in that area.

Am I sometimes still plagued with doubts? I still sometimes wonder about things. But until I see that I have been misled, I cannot stop being part of this work. If pressed by naysayers, I probably cannot clear up every doubt that some may have—but I will do my best.

But this work also has great rewards. I myself am growing in my faith as I see how God is meeting what appear to be impossible needs in the lives of the orphans. This is not being done by great fund-raising campaigns or emotional appeals. It is only being done by God quietly speaking to the ears of his people to be involved.

Besides this, the Log Church Kenya is growing as many more people in the area are coming to know the Lord. One of the pastors now has also been working in a new area where they have begun another church—a second Log Church of Kenya. They now have about 450 people who attend the two churches.

I hope to write about that soon.


If you would like to help the children of the Log Church Orphanage of Kisii, Kenya, you may make your check out to "The Log Church" and write "Orphans" on the memo line.