I AM AND I WILL 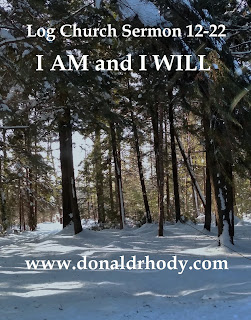 Getting to know God is not as difficult as many would make it out to be. In the first stages, every one of us, all men and women, every adult and every child—we are all able to learn a lot about God simply by observing the environment around ourselves and by contemplating the complexity and personalities of our own being.

God is one who creates, and through his creativity, he teaches us much about who he is. It actually is not much different than when we are coming to know another person. We can learn a lot about this other person by seeing the things that he or she makes, whether practical and utilitarian tools and other items, or by their creative and artistic works.

However, if we are truly to know a person, that person must speak to us. We must learn about him not only by what he makes, but also by his words. He must explain his thoughts to us and he must tell us about himself with words that we can understand. If he does not do this, our knowledge of him will always remain superficial. We may even find ourselves assuming things about him that are not true.

So it is also with God. We may be able to learn a lot about God with our contemplation of nature and the cosmos, but it will only ever be a superficial knowledge.


What is more, by knowing God only at this level, we will begin to assume things about him that are not true. This is what has happened numerous times throughout history.
To get to know God on a deeper level, it would require God to speak to us. And this is what God has done.
How is it that he has spoken to us so that we may know him?

The Early Days
I think that in the first days of creation, God speaking to man was not a difficult task. In those early days, God walked in the Garden of Eden in the cool of the day, presumably having conversation with the first man and woman (Genesis 3:8).
However, when Adam and Eve rebelled against God’s sovereignty, that fellowship was lost. Adam and Eve were driven from the garden, and those days of easy conversation came to an end.
For the first time, there was estrangement between God and his creation. This separation from God has been the natural state of man ever since that time. Even today, we remain in this state of estrangement until we make an effort to try to get to know the Lord. For his part, God is doing his best to reconnect with us, and has always done so.
Some people may question this fact. Some may think if God were only to do something more, or to do something different, such as speak directly to us or to answer our prayer for healing when we are sick, we would more likely to believe in him.
But this simply is not true. Any reading of the Biblical stories and narratives show us that belief in God is not a question of an insufficiency of evidence. Rather, our belief is a question of our willingness to respond to the evidence that we do have. It is a question of our acceptance of what he shows us.
If we are sincere about our desire to pursue a knowledge of God, we will try to learn what God is telling us about himself. When we show that we accept God on one level, he will then open up more about himself to us.
Again, it is not so much different than getting to know another person. When you first meet someone, that person does not immediately tell you all of his deepest hopes and dreams. They do not immediately tell you their most intimate thoughts. Instead, as the friendship deepens, this person increasingly begin to trust you with who he is. He begins to open up more to you about himself.

Abraham’s Journey to Know God
Concerning a relationship with God and learning who God is, a very good example of this is the Old Testament story of Abraham. When we first learn of this man, he was living in the city of Ur, which was near the Persian Gulf in present day Iraq, quite far to the east of present day Israel. Ur was the city of one of the earliest advanced civilizations that archeologists have been able to excavate. In those explorations, they have found some astounding evidences of progress in that ancient city.
This was the home of Abraham when God called him to leave all that he had, and to go to a place where God was going to direct him (Genesis 12:1; Acts 7:2-3). I do not know how much information about this future home God had given Abraham before he was to leave, but apparently, Abraham had never previously been to this “promised land” of which God spoke. I would be surprised if Abraham really knew much at all about what God had in mind.
We often do not think about the implications of the decision that Abraham was asked to make. Abraham seems to have already been a rather wealthy man in the city of Ur. It is probable that he could have chosen to simply stay there and have a comfortable life—comfortable at least by the world’s standards.
Or he could believe God and go to this unknown place of unsure future.


From these statements, God continues speaking telling of the many things that he will do. He continues in the next chapter to reveal himself in ways that before were unknown, and actually in ways that are yet to be revealed.
So you are My witnesses,” declares the LORD, “that I am God.
Even from eternity I am He, and none can deliver out of My hand.
When I act, who can reverse it?”
…Do not call to mind the former things; pay no attention to the things of old.
Behold, I am about to do something new; even now it is coming. Do you not see it?
Indeed, I will make a way in the wilderness and streams in the desert. (Isaiah 43:12-13, 18-19 BSB)
“I am the LORD;” God says in the book of Ezekiel, “I will speak the word that I will speak, and it will be performed. It will no longer be delayed” (Ezekiel 12:25 ESV).
“I am the LORD and I do not change,” God declares in the book of Malachi (3:6).
These statements of “I am” and “I will” continue in the New Testament. They are especially striking in the book of John. The statements are spoken by Jesus Christ.
“I tell you the truth,” Jesus said. “Before Abraham was even born, I am!” (John 8:58)
Shortly after multiplying five loaves of barley bread to feed five thousand people, Jesus said to them, “I am the bread of life. Whoever comes to Me will never hunger, and whoever believes in Me will never thirst” (John 6:35). True life is sustained through Christ.
“I am the light of the world” (John 8:12). The world stumbles along in spiritual darkness. Jesus brings the light of truth.
“I am the door of the sheep.” (John 10:7, 9). The door is on the sheepfold so that the sheep can rest in peace and safety. Jesus offers that same peace and safety to his followers.
“I am the resurrection and the life” (John 11:25). The world can only offer death as a final solution. But death is not the final word for those in Christ. He will give life.
“I am the good shepherd” (John 10:11, 14). As a trustworthy shepherd is attentive to the needs of every sheep in his flock, Jesus also will care for us, and watch over our safety.
“I am the way, the truth, and the life” (John 14:6). In the world we constantly seek direction, we debate the truth, and we argue about life. Jesus is the source of all truth and knowledge about our Creator God.
“I am the true vine” (John 15:1, 5). Life is not self-sustaining. It can only be sustained if nourished by the life of Christ. A life that produces fruit is only able to do so through the life of Christ.
I Am and You Will
The statements of “I am” continue to events that have not even yet occurred.
The Lord God says, “I am the Alpha and the Omega. I am the One who is and was and is coming. I am the Almighty.” (Revelation 1:8)
“I am the One who lives; I was dead, but look, I am alive forever and ever!” (Revelation 1:18)
“I am,” Jesus said. “And in the future, you will see the Son of Man sitting at the right hand of God, the Powerful One, and coming on clouds in the sky.” (Mark 14:62)
“I am coming soon. Hold fast to what you have, so that no one will take your crown.” (Revelation 3:11)
The One who was sitting on the throne said, “Behold! I am making everything new!” (Revelation 21:5)
Jesus, the One who testifies that these things are true, says, “Yes, I am coming soon.”
Amen. Come, Lord Jesus! (Revelation 22:20)
The passages are quite numerous in the Bible where God couples the “I am” with the “I will.” I want to mention just one more verse. This one is from the book of Psalms:
“Be still and know that I am God; I will be exalted among the nations, I will be exalted in the earth” (Psalm 46:10 ESV).
It is time for you to exalt him in your life.
Posted by Donald Rhody at 6:48 PM