Construction of the dormitory for the children is somewhat on hold at the moment until we have enough money to buy the tin sheets (or the “iron,” as they call it) for the roof. But as you saw in the previous Kisii Report, we have the logs for making the trusses and rafters, and that is currently happening.


As we wait, I thought that I would take the opportunity to show some of the other things around the orphanage.


Some have asked me why the people there cannot grow enough food to feed the orphans. Here is a photo of the land that they have to grow crops. It is an area of about a quarter acre. 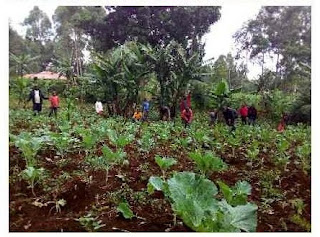 How big is that?


In our increasingly urbanized US, not many people have any idea what a quarter acre is unless it is compared to a city lot, or as more common in these days, comparing it to a football field. (I recently heard a news report about the recent devastating Carr Fire in Northern California, comparing the area burned to the number of hundreds of thousands of football fields instead of the number of acres! This alone is a commentary of where our culture has moved).


The crop that is grown there is called locally sukumu wiki (kale), which should be to the considerable delight of all you health food enthusiasts out there. The fact is, it is a good food to grow for them.


Besides the dormitory which is being built, I see that they have also have taken advantage of the construction happening in the orphanage to upgrade the swing. It is the only playground equipment that the children have.

When I was there a year ago, I had purchased those chains because the nylon rope that they had kept breaking. But I see that they also have put in some concrete footers for the uprights.


I wonder if they still have the football (soccer) that I bought. They before had none. One of the boys came up to me and said so politely, “Sir, we would like a ball that we could kick.”


The signs that the children are holding are not legible on the photo, but they say: 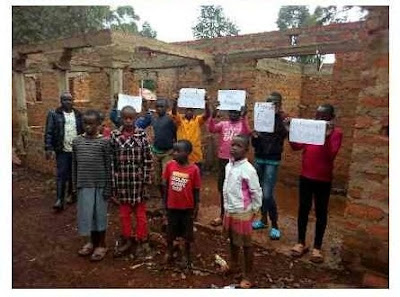 
Joel tells me that these statements of gratitude were written from the hearts of the children. I believe that it is true. The thankfulness of the children is one of the things that was so notable to me when I visited.


God willing, I will be back in about two months.