STAND AND SEE THE SALVATION OF THE LORD (PART 1)

The Biblical story of David and Goliath is one that I am quite sure almost all who will read this blog know. The story is even known outside the Christian community and in the wider culture. From sporting events to political competitions, everyone knows what is meant by a “David and Goliath” matchup. 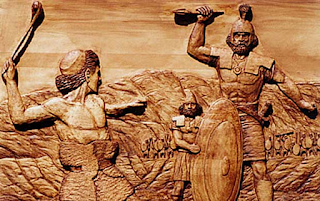 
As the young shepherd approached the giant Goliath, David calls to him, “You come to me with a sword, a spear and a javelin, but I come to you in the name of the Lord of hosts…that this assembly may know that the Lord does not deliver by sword or by spear; for the battle is the Lord’s” (1 Samuel 17:45-47).


Many of you have no doubt heard sermons about David’s prowess with a sling. As the young lad spent many hours and days tending sheep, he had honed his ability to hit the mark exactly as he hurled his sling around his head and let the stone fly at just the right moment. And there is no doubt that David was no coward in confronting wild beasts. How many of us would dare to seize a lion by the beard and strike him until he was dead?


I think that I would tend to say, “Let the lion have just this one lamb.”


It is a fact that God had given David previous life experiences that would enable him to do the task that he would one day be called upon to do. I do not deny that to be true. But the greater point of the story is found in David’s own words to the giant Goliath before the young shepherd killed him.


Who would have guessed that this young shepherd lad could kill a giant trained in warfare? It is so unlikely. The only reason that David was allowed to try it at all is because the entire Israelite army trembled in their sandals at the sound of Goliath’s boasts. I do not want to diminish David’s skill or bravery, but the main point of the story is not David’s skill and bravery, or even the preparation that the Lord had given him. The main point of the event is just what David said, “The battle is the Lord’s.”


Moses at the Red Sea


There is another incident in the Bible that has a lesson very
similar to this one. It is an incident that has special meaning to me, since God used this passage of Scripture in a very personal manner to me at one time in my life. I may one day share that, but for now, let me just tell you the story.


The year that this event takes place is not known exactly, but lets just say it was about 1400 BC. The nation of Israel had been in captivity and in slavery in Egypt for about 400 years. After all these years, the time had come for God to fulfill his promise to lead them out of that captivity and to return to their own “promised land.” The person that he put in charge of this task was Moses, a man with his own interesting history.


Moses went to Pharaoh on numerous occasions with the message from God. “Let my people go.”


This is another well-known story, and I will not go into details at this point, but I bring you to the place in the event where Moses is standing on the banks of the Red Sea. He has behind him perhaps a million Israelites, and perhaps many more. They had managed to leave Egypt proper, but they had not yet escaped completely. Bearing down upon them was the Egyptian army, the greatest in the world at that time, complete with horses and chariots. These were the state-of-the-art fighting units in that era.


There seemed no escape for Moses and the Israelites. Because of the sea in front of them, they could not flee this army, and they had no army of their own to fight back. The Israelites had just left generations of slavery. All that they knew was mixing straw and clay to make bricks. And now, all the forces of Egypt were bearing down upon them. The Red Sea lie before them. The Israelite people could already see themselves being slaughtered on the banks of the sea.


As Moses stood at sea’s edge, he himself did not know what to do. The only thing that he could do was to express his faith in God.


“Do not fear!” he shouted to the multitude. “Stand by and see the salvation of the LORD which He will accomplish for you today; for the Egyptians whom you have seen today, you will never see them again forever. The LORD will fight for you while you keep silent” (Exodus 14:13-14 NAS).


“Stand and see the salvation of the Lord.”


Of course you know what happened, and we shall return to that point in a moment.


However, I would first like to tell you of another incident in the history of the people of Israel – more specifically, the nation of Judah. Again, I don’t want to get specific with the dates, but this incident took place sometime in the 9th century BC.