THE LOGGER (FROM THE NOVEL)

It was Emil who had suffered the most during the hunger years. In addition to the food shortage during those years, there had been a stomach ailment that had been afflicting many. They called it “rödsot.” It was a type of dysentery.
Emil was nineteen years old at the time and living in a community that was going through an outbreak of rödsot. He was barely able to keep down any of the little food that he was able to find. Most people, including Anders, really thought that Emil would not survive.
But Emil did survive. In fact, he did more than survive. Anders' brother had always been tall, but also always quite lanky. However, after he recovered from his rödsot and after food became more available, Emil had such an appetite that it seemed like he could eat from sunup until sundown, and sometimes even put in a little overtime.
His lanky frame filled out. It was if the rödsot awakened in his body the need to put in some reserves. Although the family teased him about getting a little broad around the middle, Emil’s weight really was not primarily fat and it was not just about the middle. The bulk in his arms and legs increased, and his chest broadened considerably. This was not fat, but Emil had become very muscled. Anders was glad that his days of wrestling with his brother were over.
The teasing that he got from the family was given and received with good humor. In truth, everyone in the family had been so worried about whether Emil would survive his illness and survive the hunger, that it always was a great release of joy to be able to actually joke about his health.

THE LOGGER
One of the reasons that Emil had become so strong was that he had been involved with the forest industry. He was a logger. In some ways, Anders envied the life that Emil had. Emil was constantly out in their beloved forests of Sweden and among the trees through which they used to 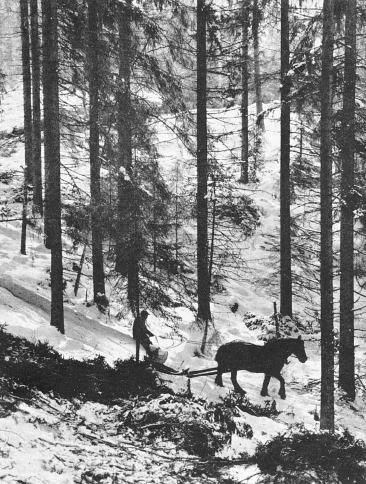 wander as boys.
As with Georg, Anders now could see that Emil showed an early inclination to the work that he would eventually choose. Although all three brothers enjoyed hiking through the forests, it was Emil that mostly seemed to initiate these excursions, and it was Emil who took most of the leading role, even though he was not the oldest of the three.
Now Emil continued in this role. The forest industry was going through a transition during this time. For centuries, the normal way of living in the forested areas was not primarily through the use of the timber, but rather through burning them down so that crops could be grown. This was called the slash and burn method of agriculture.
In the slash and burn method, all of the trees in an area of the forest would be cut down and allowed to dry for a year, or preferably two. Then, normally just before Midsommar’s Day (June 21), and depending upon the weather conditions, the dried out trees and brush would be set ablaze. The ideal conditions for these farmers were a good dry spell in early June that was to be followed by a short period of rain. In this way, the farmers could plant their seed in the damp, but still warm ash. This, they believed, produced the best crop.
But this method of agriculture was not self-sustaining. The first year of the burn over was the best, but the yields grew less in the subsequent years. Many people, after a few years, would slash some different acreage in order to start again with some renewed soil. But the general trend was toward depletion of the soil. It was not a good farming practice.
But the logging industry was now becoming increasingly important in Värmland, and Emil was heavily involved with it. This importance rose with the mining industry, which required lumber, and also with the increased exportation of lumber to other countries.
Emil began as a sawyer and a river man. In fact, as Anders rode in the wagon north along the river Klarälven, he thought often of Emil. Emil had been a river driver on this water, and as far as Anders knew, even earlier this spring had rode down the Klarälven on the logs.
Most of the logging in Värmland was done during the winter months. The trees were felled, cut into lengths and skidded onto and piled on the frozen river. This they did all winter long. It was not only one logging company doing this, but the logs piled on the ice were from the cuttings of various areas along the river.
When spring came and the ice melted and broke, all of these logs floated en masse down the river to the sawmills near Karlstad. To keep the logs from forming jams and stopping the flow of logs, men had to ride the logs carrying long pikes. Some years before, these log drivers had formed themselves into an association called “Gentlemen Timber Handlers on the Klarälven and Watercourses Flowing into It.”
When the logs all arrived at a sorting lake near Karlstad, the rivermen then had to sort them out according to the companies who had cut them. As each owner had put their logs on the river during the winter, they had marked the ends of each of their logs with a special mark using a marking axe.

Anders was not able to see Emil when he passed through Karlstad, but Emil would soon also be coming home to see their mother. His arrival would enhance this home reunion.
(Logging photos credit: Lennart Elg)
Posted by Donald Rhody at 6:44 PM