Since that winter of the past, Anders had learned the trade of stone mason; a “stonecutter” (stenhuggare) they called him. This is normally a skill one learns through apprenticeship of several years, but Anders had picked up his knowledge in a somewhat unorthodoxed way. He had worked for about a year and a half with an older man who had been making footings for several new train rail bridges.
The man’s name was Lars. He had been a friend of Anders’ father, who had died several years before that time, even before the starvation winter. Anders was quite small at the time of his father’s death, but he remembered it well. In fact, it was one of the memories that kept coming back to him this winter. It was not long before Christmas in that year of long ago that his father had died.
The stonemason Lars had also been a friend to the entire family for years, and, although he lived in a different province, he tried to help out the best that he could after the death of Anders’ father. To be honest, this no doubt was one of the reasons that Lars had taken on young Anders to help him on the bridge footings.
But the other part was that Lars did need help with this project. He really was getting quite old, and should not have still been doing this work. Stonemasonry is a very physically demanding job, and because of his age, Lars now cut and set the stones only with the greatest of difficulty.
Despite the name of stonecutter, there is no actual 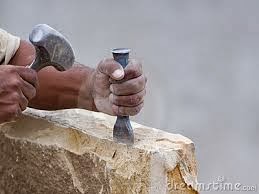 cutting of the stone involved, as with a saw of some kind. The basic tools of a stonecutter are the mallet and the chisel. Some variety of these two tools, along with a metal straightedge, is what the stonecutter uses more than any other.
There are some other necessary tools of the trade, of course. Among these are the steel plugs and the likewise steel feathers that are used for splitting a rock along its line of cleavage. But all of the tools are all hand tools. They are physically demanding tools. Added to this difficulty is the very great weight of the stone itself. It all adds up to work that will make a man dead tired by nightfall, even if the days are the short winter days.
This demanding physical aspect of the work was the reason that Lars had Anders do as much of it as the lad was able. It was because of all of this hands-on practice that Anders had picked up the skill so quickly. However, it must also be said that Anders had the inclination for this type of work. He was more or less of a perfectionist by nature; and doing things accurately is a necessity in cutting and laying stone.
This is especially true when it came to laying up stone without using mortar. Much of the work of a stonecutter was of this type. Stone set with mortar is a much simpler task, and requires much less accuracy in cutting and in setting. What gaps still exist between the stones are simply filled up with the mortar.
However, Lars was mostly intent of teaching Anders how to build with stones without the use of mortar. Lars thought this important for at least a couple of reasons.
The first of these reasons is the climate, especially in the more northern regions of the country. Stone masonry using mortar requires temperatures that remain above freezing until the mortar is completely cured. If the wet mortar should freeze, it weakens to the point where the mortar will completely fail, thus ruining the bond between the stones that it is supposed to create. This will eventually cause the building to crumble. The use of mortar was fine in the summer months, but if the stone mason would confine himself only to those months, he would never have enough work.
The other point was even more important to Lars. Lars basically mistrusted mortar. He said that he has seen too many building projects fail because of poor mortar. Mortar is meant to bind the stone together, but he said that it often tends to weather and deteriorate with the passing of time, leaving the rocks to loosen.
Besides this, the mortar-laid stone are much more sensitive to vibrations. This is especially important for railroad bridges and trestles. The greater the vibration to which the stones are subjected, the more that they will tend to loosen. If the bridge had been made using mortar, there will be much more continual maintenance required to keep it sound and strong.
Lars believed that fitted stones that are accurately laid are much less sensitive to vibration. In fact, if the stone is laid correctly, the vibrations will actually gradually work the stones to fit tighter and tighter through the years. Some of the tightest fitted stones are ones that had been laid decades before.
Anders found himself agreeing with Lars in this, although he realized that his teacher may have formed too strong of an opinion based on a few poorly made stone and mortar structures. But stone masons tend to be hard-headed, and if you add to this a stubborn Swedish heritage, you might find it difficult to change a mind. It was said that, with the passing of the years, stonecutters become more and more like the rocks they work with. Anders decided not to press the point with Lars.
Besides this, Anders respected his mentor too much to argue with him. And, he thought, perhaps after he had as much experience as Lars, he too might have the same opinion.
Anders took the role of student very seriously, deciding to learn as much as he could from his father’s friend. Any further knowledge and skills learned will be done in the years that Anders thought that he would continue with stone work. Now was the time to dedicate himself to listening and learning.
And there was so much to learn. Young Anders learned the many practical skills needed to cut the stone accurately and to lay them tightly together. He learned the different kinds of rock and how to read them in order to see the cleavage lines where they would cleanly split.
Lars showed the lad how to read the plans for a building project, and to shape the rocks correctly to make a strong arch or a footing. He taught him how to lift the rocks into place by the use of a simple, home-made crane.
Anders saw the importance of keeping his tools sharp, and to take care of them so that they would continue to serve him well. He was a quick learner, but a careful one. Accuracy in shaping the stone was of paramount importance to Lars, and it became that also for Anders.
The boy owed much to his father’s friend, and had grown to love him almost like a father.
Posted by Donald Rhody at 4:53 PM