In my reading about Swedish history and culture relating to the novel that I am writing, I sometimes find myself following a rabbit off into the brush. Here is one of those rabbit trails...

Swedes love coffee. They always have, at least since the early 18th century. But coffee’s beginning in Sweden was small. At first, only about a pound of it was taken to Sweden in the year 1685. It did not even start out as a drink, but was instead sold in pharmacies of Göteborg for its medicinal benefits.
Its earliest popularity as a drink is Sweden really began in about 1700 when King Karl XII returned to the homeland after several years of waging war against the Russians. Much of his foreign stay was in Turkey, where he developed a liking for the Turkish drink. When he returned to Sweden, he brought with him as much coffee as his mounted entourage could bring with them. They had coffee every day in the Swedish royal court.﻿﻿﻿﻿﻿﻿ 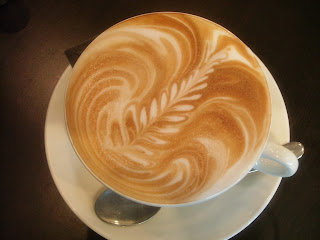 ﻿﻿﻿﻿﻿﻿
From this beginning, the popularity of coffee quickly spread, first among the wealthy class and then to all of the people. Coffee began to be imported and coffee houses started up in the larger towns. People started to meet for kafferep.
Not all Swedes were happy about the nation-wide consumption of coffee, however. In 1746 the national health authority warned against excessive use of not only coffee, but also of tea. The following year the government imposed a tax on these drinks, and soon there was a push in the parliament for the prohibition of coffee. The law passed, but the prohibition did little to stop the consumption of coffee; coffee beans now instead were smuggled into the country and secret coffee clubs opened. The prohibition ended in 1769.

KING GUSTAV III
But that was not the end of it. Gustav III became king of Sweden in 1771, and he was adamantly against the drinking of coffee. The king took to heart the warnings of the national health authority, and believed consumption of coffee and tea to be detrimental to the health of the people. To prove his belief, he ordered a scientific experiment.
The opportunity for the experiment came when he was told of the criminal trials of two identical twins. Both were tried in the court, found guilty of their crimes, and both sentenced to death. King Gustav commuted their death sentence to one of life imprisonment, under the condition that one of the prisoners drink three pots of coffee every day, and the other three pots of tea. Two physicians were appointed by Gustav III to oversee the experiment and report their findings to the king. His expectation was that in drinking this much of the caffeinated beverages, they would surely die soon, or in the least become very ill.
However, the experiment was never concluded. The two doctors died of natural causes before the coffee and tea drinkers succumbed to the brew. The tea drinker finally did die at the age of 83, and the coffee drinker some years after that. Gustav III was assassinated in the year 1792, so neither did he get to see the end of the experiment.

CARL LINNAEUS
Neither did Carl Linnaeus see the end of this scientific experiment. Carl Linnaeus, you may remember, was one of the more famous Swedes of late history. Linnaeus was the botanist who developed the genus and species system of the biological naming of living organisms, the system that we still use today. Linnaeus knew of this coffee experiment, but like Gustav III, he died before it was concluded.
Linnaeus did not dismiss the warnings against coffee drinking, but still he considered coffee as a healthy drink, "as long as it was not taken too close to bedtime," he said. In fact, Linnaeus seemed to enjoy the entire coffee culture of the Turks. While he was in the Royal Swedish Court, he realized that he needed to conduct himself with a certain decorum, like a Frenchman. However, while at home, he followed a different standard.
This standard was, the way Linnaeus put it, “When we are at home, we live like Turks: a long and wide dressing gown, loose slippers, a big and white cap, we smoke our tobacco just like Turks; so that the Turks have taught us to dress at home and to drink coffee.”
The health effects of coffee consumption were long debated in the Sweden of the 1700’s, and numerous bans against coffee were attempted even until the 1820’s. But in the end, the coffee culture prevailed. After the last ban was lifted, coffee quickly established itself as the national drink of Sweden. Since that time, Sweden has been among the countries with the highest per capita coffee consumption in the world. They drink even more coffee than the Turks, the friends of King Karl XII and the relaxation mentors of Carl Linnaeus.
Posted by Donald Rhody at 8:21 AM