Like a potter forming an intricate clay pot on a potter’s wheel, on the sixth day of creation God formed the first man. “It is good,” He said. God was pleased with his creation.


Adam had not been created within the Garden of Eden, but from the dust of the ground outside of the garden. It was in some other location that God “breathed into Adam’s nostrils the breath of life.” God had in his mind to create the woman as well, but interestingly, he did not do this immediately. He first took Adam to the garden to present to him his new home and to give him an orientation.

I cannot begin to imagine the wonder that Adam must have felt as the two walked around the garden! God, we know, was well pleased with his creation and must have been like a proud artist explaining his work. He showed Adam the trees of the garden and the many animals. He specifically instructed Adam about the Tree of Life and the Tree of Knowledge of Good and Evil.


The text does not say so, but I suspect that God took the time to explain how all of the individual aspects and creatures of his creation were to exist together in total harmony. I say this because we know that God instructed Adam in his responsibility to “cultivate” the garden and to “keep” it (see the post – Part 3). I am filled with amazement just to try to imagine the conversation that the two had. But even today God still likes to share his work with us, if we care to listen.

Adam was not the only creature that God had formed out of the ground. God had also formed “every beast of the field and every bird of the sky (2:19). These included “living creatures after their kind: cattle and creeping things and beasts of the earth after their kind” (1:24).


After Adam’s orientation of his new home in the Garden of Eden, one of the first tasks that God gave to him (perhaps the very first task), was to give names to all of the animals. I do not know how big of an undertaking this was. It is impossible to say what the exact number of animals that God brought to Adam to see what Adam would call them. When the text mentions “living creatures after their kind,” we do not know if the word kind would most closely equate to our present day classification of species or if it would be closer to our word genus.


I doubt if there are many people who would think that when the text mentions that there were “cattle,” it is intended to mean that there were Holsteins, Guernseys and Scottish highlander cows (plus all the other cattle variations). Only the progenitor of all of these types came before Adam on that day to be named.


A species is usually defined as a group of animals capable of interbreeding and reproducing, such as a Holstein cow breeding with a Guernsey cow. However, there is no viable cross-species reproduction. A Holstein cow cannot successfully breed with a horse, for instance.


Scientists have today identified almost 5,500 different species of mammals that currently exist in the world, and almost 10,000 species of birds. We know that species of animals do evolve in small ways (micro-evolution) to form types or subspecies within the species. And then there is crossbreeding, such as the aforementioned Holsteins, Guernseys and Scottish highlander cattle. There has even been some research to show that a single species of organisms could develop into two separate ones (this is called speciation, although it seems that this work is inconclusive).


However, I am not of the persuasion that all the species of mammals and birds have one common ancestor (such as an evolutionist would say). There has never been any evidence to demonstrate that this mechanism of species development is a viable one. This is something that has never been observed and is only a “reality” in evolutionary theory.

Nevertheless, if one were to assume that there must have been at least one of every species of animals and birds that still exists today (every beast of the field and every bird of the sky), it is quite a large number, and some others have become extinct. The consideration that Adam may have had to give names to 15,500 animals on that 6th day of creation (and more if he also gave names to the 9,000+ reptiles) is a difficult one indeed.


Some might say that the word “kind” in the Genesis text may equate better to our broader classification of “genus,” but even with that, the task that Adam was given that day must have been formidable (I was not able to find out an estimate of the current number of genus in the world, I think because there is not agreement among biologists as to what actually constitutes a genus).


If one depends very heavily upon speciation, one could make some calculations about how it could be possible for Adam to name all of the species in the Garden of Eden within a 24 hour period. However, this view would require the continual development of new species on our planet in order to reach the current level, and this level of speciation has never been observed in our natural world. In fact, to be honest, I do not think that speciation has actually ever been observed in our natural world.


To creationists, such as myself, the word speciation is more tolerable than the word evolution. However, with such a high level of speciation necessary to accommodate Adam naming all of the animals in such a short period of time just several thousand years ago, at what point does it cease to be mere speciation and begin to become evolution?


Adam, I believe, was of much higher intelligence than any person alive today. The effect of a sinful nature has had a degrading effect up not only our spirits, but also upon our minds and bodies. But even with this, the naming of so many animals would be quite formidable, and I do not get the sense that God was in a hurry to “get things done” before the end of the 24 hour day. Moreover, God is never in a hurry.

With all of the above considerations, I have come to the opinion that, while some speciation has occurred in species development, I think it is best not to insist that the 6th and the other creation days were of necessity the 24 hour days that we see today. My best understanding is that I need to leave the actual length of the creation days open to consideration and not to hold adamantly to our current 24 hour day. I do not think that these days were ages or eons, as some would say, but still a relatively short period of time.


Actually, we have no way of determining the length of the day at that time. The days of creation were unique in every sense, even to the point that the day length was not determined by the rotation of the earth in relation to the sun. God did not create the sun and moon until the fourth day. Thus we know that, in at least the first three and a half days of the six day creation, the sun played no part in the length of the day.


I am also quite sure that there are many considerations of the exact details that are unknown to us. When we know all of the facts, we will also understand. In whatever way that it was accomplished, God intended it for a reason and it was done in the way he has revealed it to us.


But I do not wish to become overly technical here. The marvelous aspect to me is that God brought all these animals to Adam to be named instead of naming them himself and then telling Adam what the names were.


I said above that there was a reason that God did this. Actually, there were at least a couple of reasons. The first of these have to do with the fact that God intended that people were to “have domain over the fish of the sea and over the birds of the sky, and over every living thing that moves on the earth.”


The naming of something or of someone is normally reserved for whoever is to have immediate responsibility for it. It is the pet owner who names his dog, it is the farmer who names his cows, and it is the parents who name their new child. Giving something a name is an act of recognition that I am in some way responsible for the well-being of it. By naming something, I have put even my own identity with it.


When God brought the animals to Adam so that Adam could give them names, it was a demonstration of the fact that Adam was to have dominion over these animals; he was to be their “keeper.” There are some aspects of our relationship with the animal kingdom and with nature in general that have changed since those first days in the Garden of Eden, but this one aspect; that is, that we should be the caregivers of our environment, has not changed. 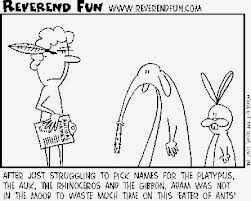 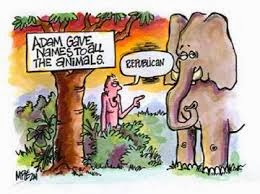