I have written before on this blog about some of the dangers of working in the woods. Logging is one of the most hazardous of occupations. Even if one is careful and has experience, the unexpected seems always to be lurking not very far away. Disasters happen quickly; or as one logger told me, “They don’t happen quickly. They have already happened before you know it!” So it was with me earlier this spring.
I was cutting down a tree in the woods. As always, the tree needed to fall in exactly the right direction so that it would fall all the way to the ground and not get entangled in the top of another standing tree. This particular tree that I was felling was about sixteen inches on the stump. The only obstacle in the path where I wanted it to fall was a limb growing out of standing tree and reaching across the falling zone, a limb with the diameter of about four or five inches.
I thought that the tree I was felling was large enough that when it fell past that limb, it would surely just break it off and fall all the way to the ground. The tree that I was cutting did fall all the way to the ground, but the limb of the other tree did not break.
Although at the time I saw none of what occurred, a few days after the accident I went back to try and figure out what hit me. To the best that I could determine, here is what took place:
As the tree fell past the limb in the standing tree, that 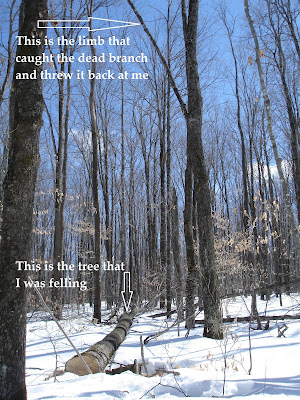 limb bent back and caught a smaller, dead branch from the falling tree and snapped it off. The limb from the standing tree bent back like a spring; then, when it was released, shot the dead branch back at me.

The small branch came at such a velocity, that it broke the brim of my hard hat and drove the pieces of the brim into my upper cheek, just below my right eye. I think that the branch itself must have also hit me directly in the cheek, right on the cheekbone beneath my eye. The snow around me was instantly red with blood. I do not think that my eye was directly impacted, although there were a few small shards of the plastic from my hat that flew into the eye.
At the moment that I was hit, I did not immediately know what had happened, only that I needed to get out of the woods as quickly as I could. Fortunately, my tractor was nearby and pointed in the right direction to go out of the woods. I started for home. Blood was running down my face, and by the looks of my tractor, it must have been spraying out somewhat. There was blood on the hood of the tractor and on the rear-view mirror ahead and above my head. 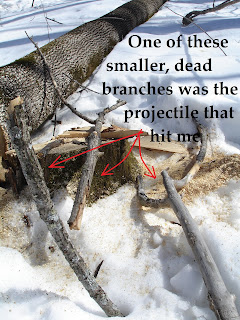 
Once in the door at home, Vivian came running in to see what was wrong. At the sight of all the blood, she started to become faint. However, she helped me clean up the best that we could. The bleeding continued but we bandaged it heavily. Her biggest help was to get the shards of hat out of my eye. They were sharp and very irritating.
As I looked at a light bulb with my injured eye, I noted that I could distinguish the difference in brightness between looking directly at the light and looking away from it. I hoped that this was an indication that my eye and optical nerve were alright and probably just clouded with blood. The eye itself looked fine, except that it had undergone some trauma. I could move my eye up and down and to the side, although I had no vision in it. My face had not yet swollen much, so I could see the injured eye with my other eye. Vivian was also able to clean it out with a tissue.
We were able to get most of the bleeding stopped, but there were a couple of lacerations that were deeper and continued to bleed. With compresses, the flow was slowed considerably.
Up until this point, I did not feel terribly bad, but now the shock of what had happened began to impact my body. Interestingly, the thought that struck me at this time was what a wonderful thing adrenalin is. The sudden surge of energy that the adrenalin gave me allowed me to run to the tractor and drive it home, all without too much stress. Once I was home and cleaned up, I found that I had no strength. I thought to myself that if I would have had to drive home then, at that point, I did not know if I could do it.
Although in my case is not exactly the best example, in many circumstances it is the adrenalin that enables someone to get out of a dangerous situation before the he feels the full impact of his injury, such as in a wild animal attack. Despite all the teaching of the wonders of evolution, to me the very existence of such a thing as adrenalin is yet another example of the wonders of an intricate design. Designs do not happen by chance. Designs can occur only if there is a designer. It was to that Designer that I now prayed.

(Continued in a few days)