Some months back (on January 20, actually), I wrote about Cora’s Predicament. Cora is the name of one of our 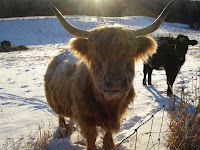 Scottish Highlander cows that I bought last autumn. When I bought Cora, she was pregnant. The seller thought that she would be due to freshen (give birth to the calf), sometime in January. It was difficult to tell, however, since Cora had not been bred by artificial insemination, but had been with a bull.
In Cora’s Predicament Part 1, I pondered the difficulty of a cow giving birth to a calf on a minus 20 degree night in Northern Wisconsin. Every day, I advised Cora to wait until the weather warmed a little. January came and went, and no calf was born. I liked to think that it was because Cora listened to my advice, but we know that babies (baby cows or baby anything) wait for no one or no thing.
February came. Every day I continued to ask Cora about her calf. She just looked at me through the long hair hanging in front of her eyes. I think that she was getting tired of me asking about it, as if she could do anything to speed things along. February came to an end and no calf was born. That was fine. It had been a cold month.
March usually brings some first signs of spring to our farm. This March did not. Despite all the talk of global warming, this has been one of the coldest springs that we have had in many years. One day Cora was lying in some old hay on the field and she looked to me like she was beginning to go into labor. I needed to leave the farm for a couple of hours, and was really hopeful that by the time I returned, there would be a new calf walking beside a proud Cora.
When I came home, Cora was on her feet, contently eating hay from the feeder. There was no little calf at her side. I was beginning to wonder if Cora was pregnant at all. 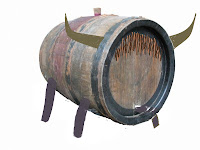 Remember that in Cora’s Predicament Part 1, I talked about the natural round shape of the highlanders. This made it difficult to determine just by looking if Cora was pregnant, especially for a novice like me.

Now it is April. We still have snow on the ground, but as I write this, it is night time and I can hear the rain on the porch roof outside my window. Spring will eventually be in full bloom. The weather is warming.
Cora, it turns out, heeded my advice.
Today (Saturday) I was out in the woods with my tractor, doing some last things before the snow all disappears. As I worked, I heard my name being called. I looked up to see Vivian coming to see me. With her was our dog Tilly.
“Cora had her calf!” Vivian called out as she came near. “Cora had her calf! All is well with both mother and baby!”
I finished the load of logs that I was loading, then as quickly as I could, headed home with the tractor. As I pulled in the driveway, I saw the proud mother. Beside her was a curly-haired little highlander calf. What a nice sight to greet me! 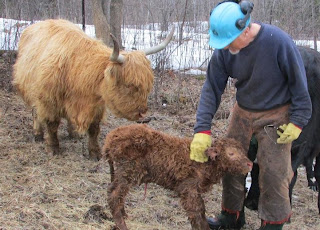 I wanted to see if it was a bull calf, or a heifer. As I walked up to mother and calf, the little one came up to me as if to introduce itself. Cora, in a display of motherly protection, lowered one horn as if to say, “Be careful with what you do to my baby.”
But Cora is all bluff. I must say that she can be a little ornery at times, 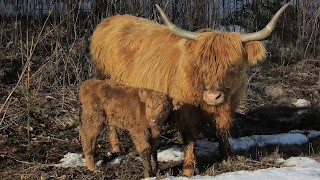 but she would never be malicious to me with those horns. I looked at the newborn one. It is a little bull calf. We will give him a provisional Scottish name, but we will not be keeping this calf. When I bought Cora, the agreement that I made with the seller was that he would get the calf when it was weaned and on pasture. 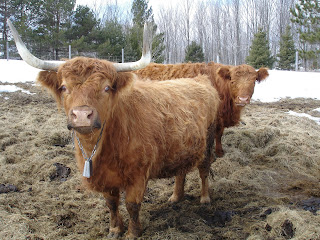 As I petted the little calf, Agnes and Effie looked on. They also are both pregnant.
“Agnes,” I said, “You’re next.”