Today, while working in the woods, I cut down a large soft maple tree. The tree had an open crack running up the side, so I knew that it would not live many years more. The wood inside was no doubt rotten, and the tree probably hollow. As the tree fell, I could see that indeed, it was hollow. It had a hole about four inches in diameter in the center, and I knew that in a soft maple, this hole would run up the trunk several feet. This tree was long overdue to be harvested.
As I was cutting the tree into lengths, I noticed a small woods mouse running across the surface of the snow. Then, as the log I was cutting fell away from the rest of the tree, I saw in that small hole in the center of the tree, a little mouse nest. It had been made cozy by a soft filling from the down of wild turkeys that lived in the woods, and with plant fibers that the mouse had found near his tree.

I looked for the mouse again. He was scurrying around on the snow, ducking into little holes in the snow he found under stones and old fallen branches. I wondered what this tiny evictee was going to do the rest of the winter. I had just cut down the home that he had carefully prepared in order to make it through our long and cold winters of Wisconsin. Now he was at the mercy of whatever snows and cold would be coming the rest of the year.
There was no turkey down to find anymore, no soft plant fibers. It was all covered with snow. And what of his stored food? I assumed that was also someplace in that hole in the tree that I was soon to take out of the woods.
I found myself feeling sorry for the little rodent. Realistically, I knew that leaving the cut log in the woods for him would not help. My chainsaw had destroyed his nest, and with the destruction of his home, he was now so disorientated that he would not find his food cache. I knew that in all probability, he would not make it through the winter. It would either be starvation for him, or a fox would catch him. I hoped that it would be the fox. It would be less cruel. 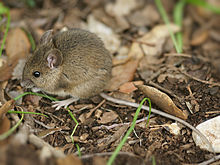 But if so, although it would be a fox that would kill him, I knew that I was accessory to the crime. I was the one who had taken away the security of the woods mouse and had left him to the mercies of cruel nature.
I have never considered myself an old softie. I know that this is far from the first woods mouse that I have left homeless in midwinter, and it will not be the last. Truth be told, this has always bothered me a little, but it seems to be getting worse with me. Perhaps I am turning into more of an old softie.
But I think that it is more than that. I think that it is more to do with the fact that after living some six decades on this earth and seeing the daily struggle for life both among humans and in the rest of nature, I have grown tired of the existence of death. Why is it that our lives should be so surrounded by death?

This hunting season I shot a deer. It was a good shot. The deer ran about three steps and fell down. Happy to have a successful hunt, I ran up to the deer, intending to cut its throat to let it bleed out. When I approached the deer, it lay there on its side, still alive. Its one eye stared up at me in terror. It could not breathe and it could not move. I had shot it through the lungs and it could get no air. As it lie there gasping for life, I did not have the heart to put the knife to the throat until I could put this poor animal out of its misery. I pointed the rifle barrel at the head and fired a shot that took away any terror the deer had felt.
This was not the first deer that I have ever shot, so that was not the reason for my over sensitivity. My feelings are not feelings that a hunter is supposed to have. If you have ever seen a video of a pack of wolves taking down a deer, you know that these are not feelings that we find in nature. In nature it is predator vs. prey. There is no room for sympathy and no room for error.
In my case, I know that it is just because I am getting weary of the existence of death. Why is it that for us to live, other creatures must die? I will never become comfortable with death. In fact, I increasingly despise it. I hate the fact that it is part of our existence here on earth.
It was not always that way. In the beginning it was not. Without going into a long, theological explanation, death is a consequence that has come to us because of sin, and sin is nothing more than rebellion against our Creator. We, as humans, thought that we could order our lives better than God, so we rebelled against His sovereignty. One of the results is that today, in this age, the death of something or someone confronts us at almost every turn.
I am thankful that this is not the end of the story. Again, I do not wish to go into any long explanations of the teachings of the Bible concerning the future days, but part of it involves the fact that the original natural order of things will be restored. Despite what I said earlier about the cruelty of predator vs. prey, when the original order of nature will be restored, we see this no longer exists:

The wolf will live with the lamb, the leopard will lie down with the goat, the calf and the lion and the yearling together; and a little child will lead them.
The cow will feed with the bear, their young will lie down together, and the lion will eat straw like the ox. (Isaiah 11:6-7 NAS) 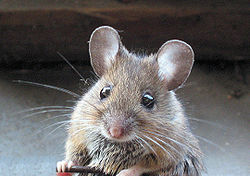 This is why I will never be comfortable with death – any death. And this is why I await the new natural order when death will be finally and forever swallowed in the victory of life. Wolves will lie down with newborn calves, and little woods mice will run free.